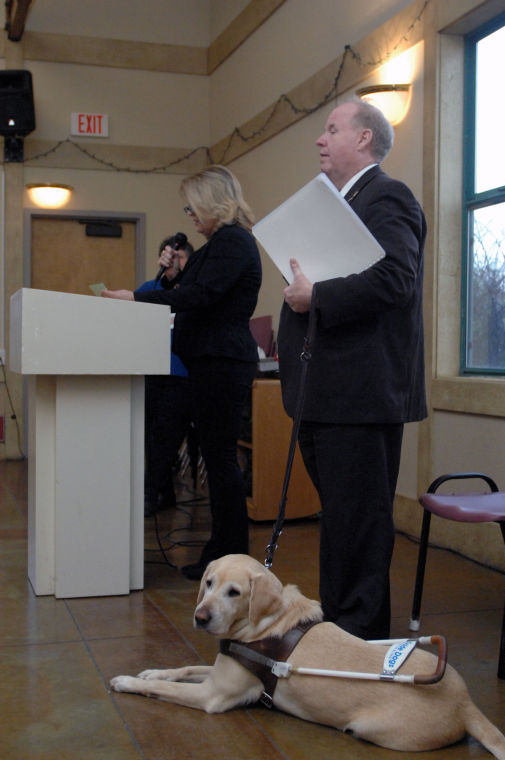 Michael Hingson and his guidedog, Africa, were introduced. 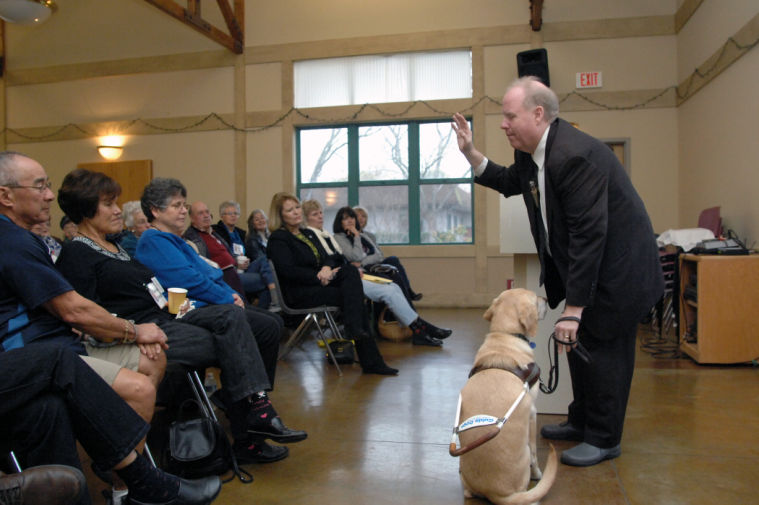 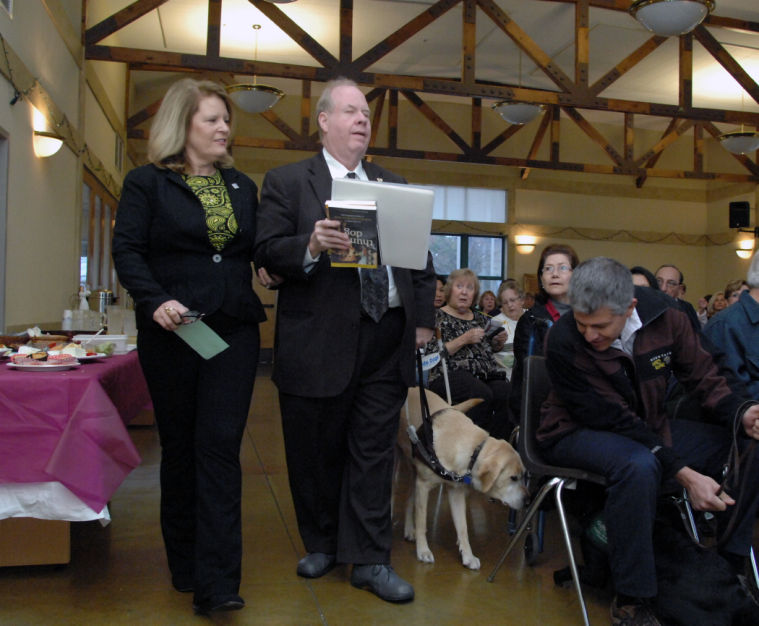 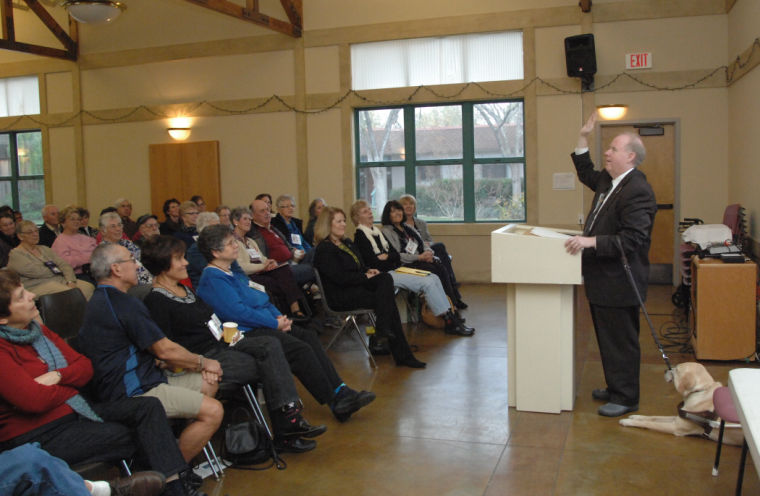 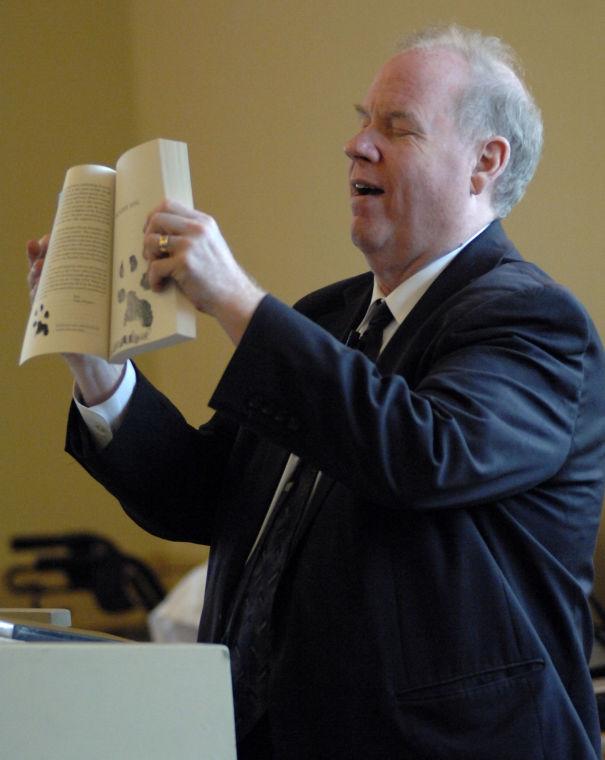 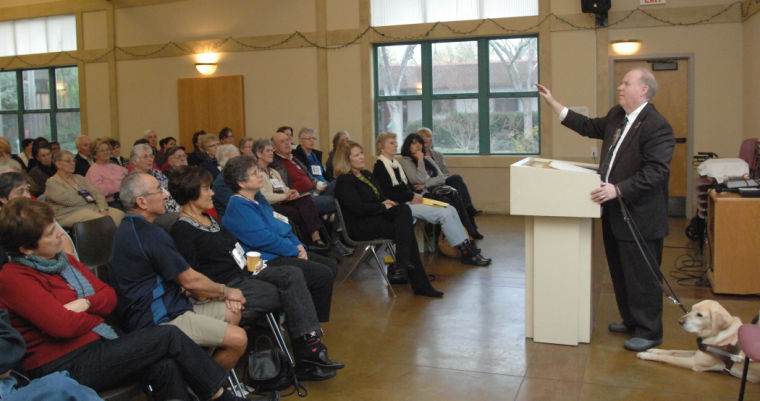 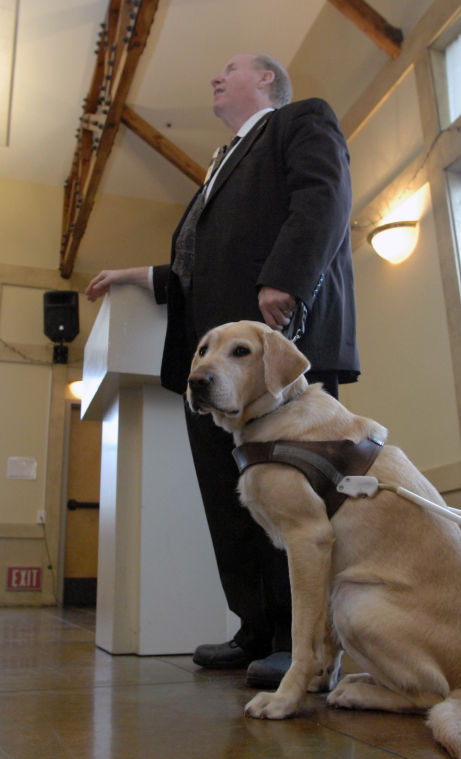 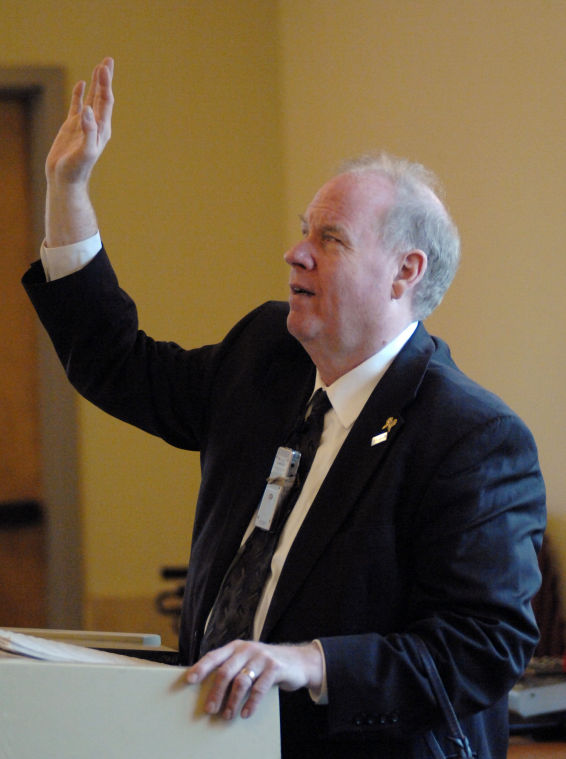 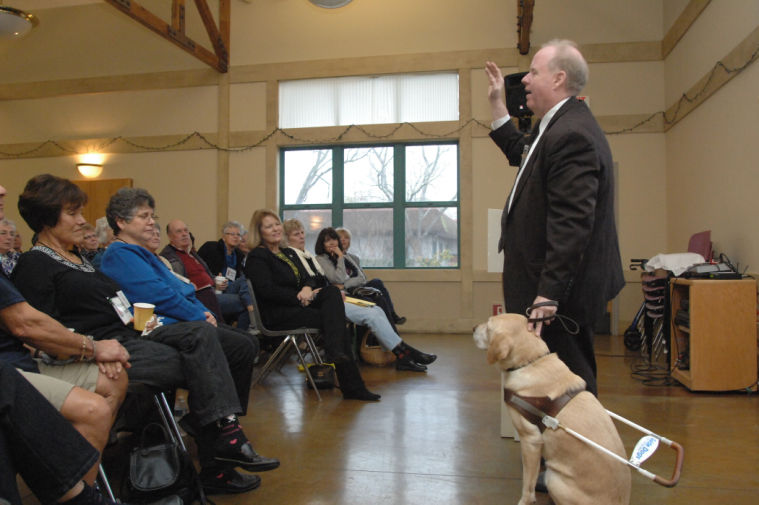 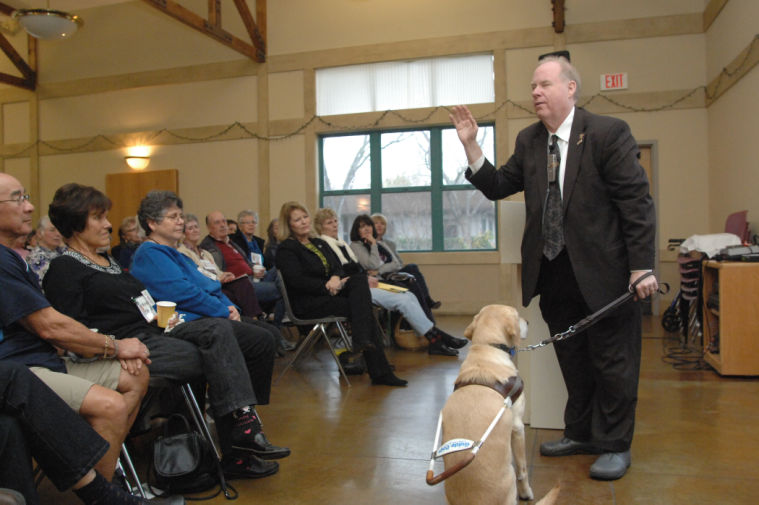 Michael Hingson and his guidedog, Africa, were introduced.

When the Boeing 767 hit between the 93rd and 99th floors of the north tower on September 11, 2001, Michael Hingson, working on the 78th floor, felt the building start to tip.

“It moved about 20 feet,” recalled Hingson, who said goodbye to his coworker David, certain the building would plunge to the street. “It slowly started moving back to a vertical position, then it dropped straight down about six feet because of the expansion joints. I could hear the debris outside our window.”

Blind since birth, Hingson is accustomed to hearing and feeling things that most people cannot see. As he and David moved into the isolated, fume-filled stairwell in the building’s center, they were led by Roselle, Hingson’s guide dog of nearly two years.

On January 24th, Hingson spoke to an audience of 120 people (and 2 guide dogs in training) at St. Charles Borromeo in Livermore. His talk included details of his escape from the tower, along with voicing his aspiration to change perceptions and attitudes about disabilities.

“Don’t think we all don’t have disabilities,” said Hingson, an Eagle Scout, radio personality and public speaker who holds a masters degree in physics. “All of you are light-dependent. I don’t care if the lights go out at Penn Station. You can drop me off in the middle of Tokyo and I can get around. I know because I did it last summer. God gave us people who can see and people who are blind. That doesn’t make either less capable. It’s all in our perceptions and what we choose to do.”

Hingson brought copies of his bestseller, “Thunder Dog, the True Story of a Blind Man, His Guide Dog & the Triumph of Trust at Ground Zero” for audience members to purchase and have signed. Published in 2011, it’s a story that combines the elements of surviving the Twin Towers attack, the motivation of a blind man to get there in the first place, and the calm guidance of a lovable Yellow Lab.

On that September morning, Roselle led the men down one flight of stairs after another. At one point, they encountered a burned woman who said she couldn’t go on, that she couldn’t breathe. “We stopped, surrounded her and gave her a group hug,” said Hingson. “Then we all continued down.”

Near the 30th floor, they met firefighters going up. One stopped to pet Roselle, getting some kisses on his face before continuing on. “It was probably the last unconditional love he received in his life,” said Hingson.

After taking the 1,463 stairs to the ground floor, Roselle led Hingson out of the north tower.

Seconds later during what sounded like an enormous “freight train, waterfall and tinkling glass,” the south tower collapsed, engulfing the area in a suffocating cloud of dust and debris.

Hingson remembered thinking, “God, I can’t believe you got us out of the building just to have it fall on us.” An eerie calm came over him as he clearly heard God’s voice: “Don’t worry about what you can’t control. Just focus on Roselle, and keep moving forward.”

“I could hear an overhang. We moved along under it until I heard an opening,” which turned out to be an entrance to the subway, where Hingson and Roselle took shelter.

Audience member Linda Lonnberg was touched by Hingson’s message of moving forward. “I’ve seen the Twin Towers both before and after 9/11. It was devastating to see that area from what I’d known before,” said Lonnberg. “To be able to come here and listen to Michael talk is very moving. Just keep going forward, that’s what I’ll take away.”

Although Roselle passed away in 2011, Hingson wrote of their earlier escape, “I trust Roselle with my life, every day. She trusts me to direct her. And today is no different, except the stakes are higher.”

Following his talk, for which he was accompanied by his current guide dog (“This is Africa who’s five going on two!”), Hingson answered questions from the audience and ended his presentation with a list of lessons he’d learned from Roselle on 9/11 called Guide Dog Wisdom: 1. There’s a time to work and a time to play. Know the difference. 2. Focus in and use all of your senses. Don’t let sight get in the way of your vision. 3. Sometimes the way is hard, but if you work together, someone will pass along a water bottle when you need it. 4. Always kiss firefighters. 5. Ignore distractions. There’s more to life than chasing tennis balls. 6. Listen carefully to others; they’ll help you find your way. 7. Don’t stop until the work is over. Sometimes being a hero is just doing your job. 8. The dust cloud won’t last forever. 9. Shake off the dust and move on.

At home that day nearly a dozen years ago, Hingson removed Roselle’s harness, a signal that she was no longer working. She ran to grab a toy, and began playing with another dog.

Number 10: When work is over, play hard with your friends. And, don’t forget to share your Booda Bone.

For more information, visit www.michaelhingson.com, or Facebook: Roselle, the 9/11 Guide Dog. Future speakers at St. Charles are posted at www.stcharlesborromeo.org.