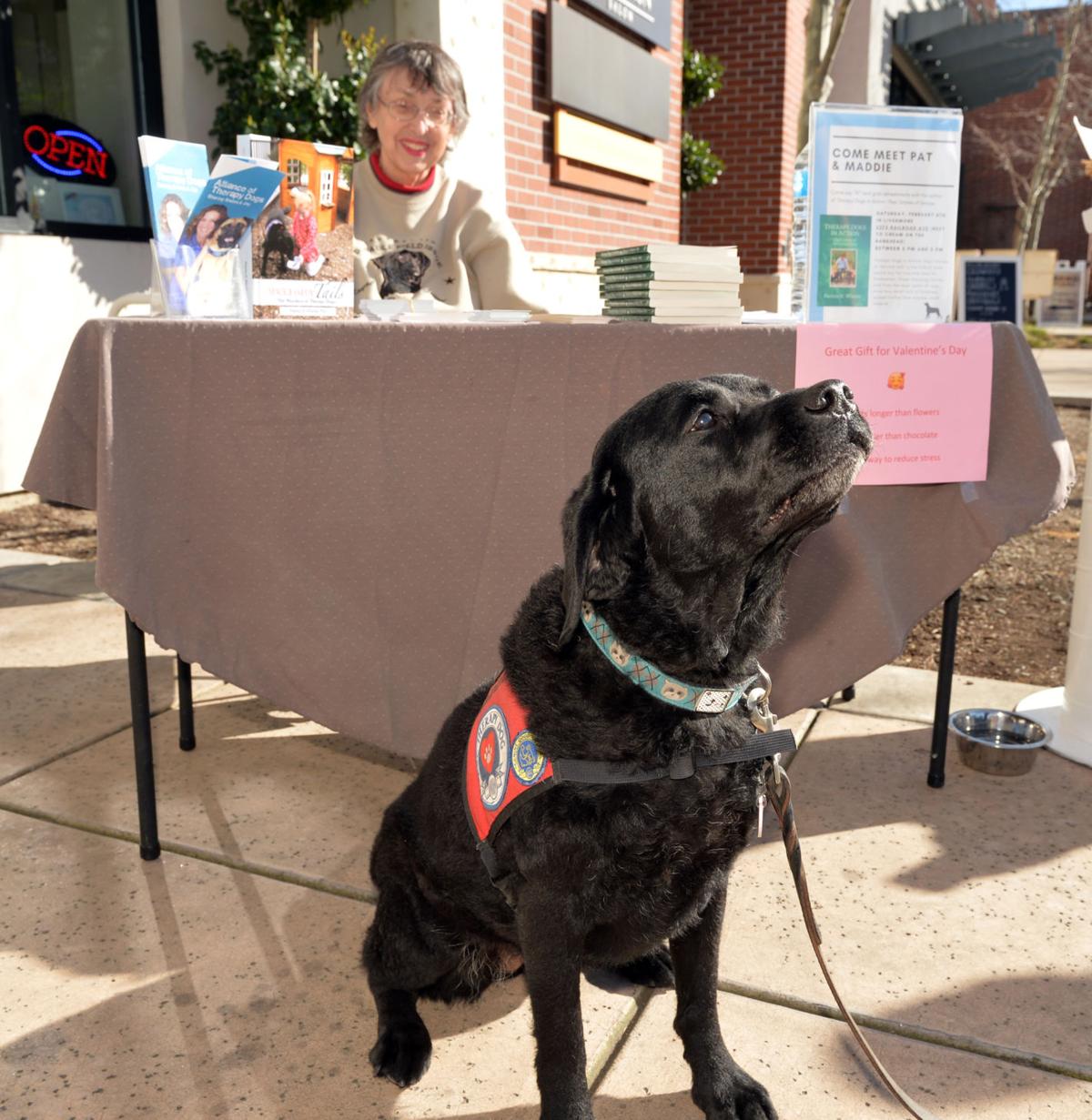 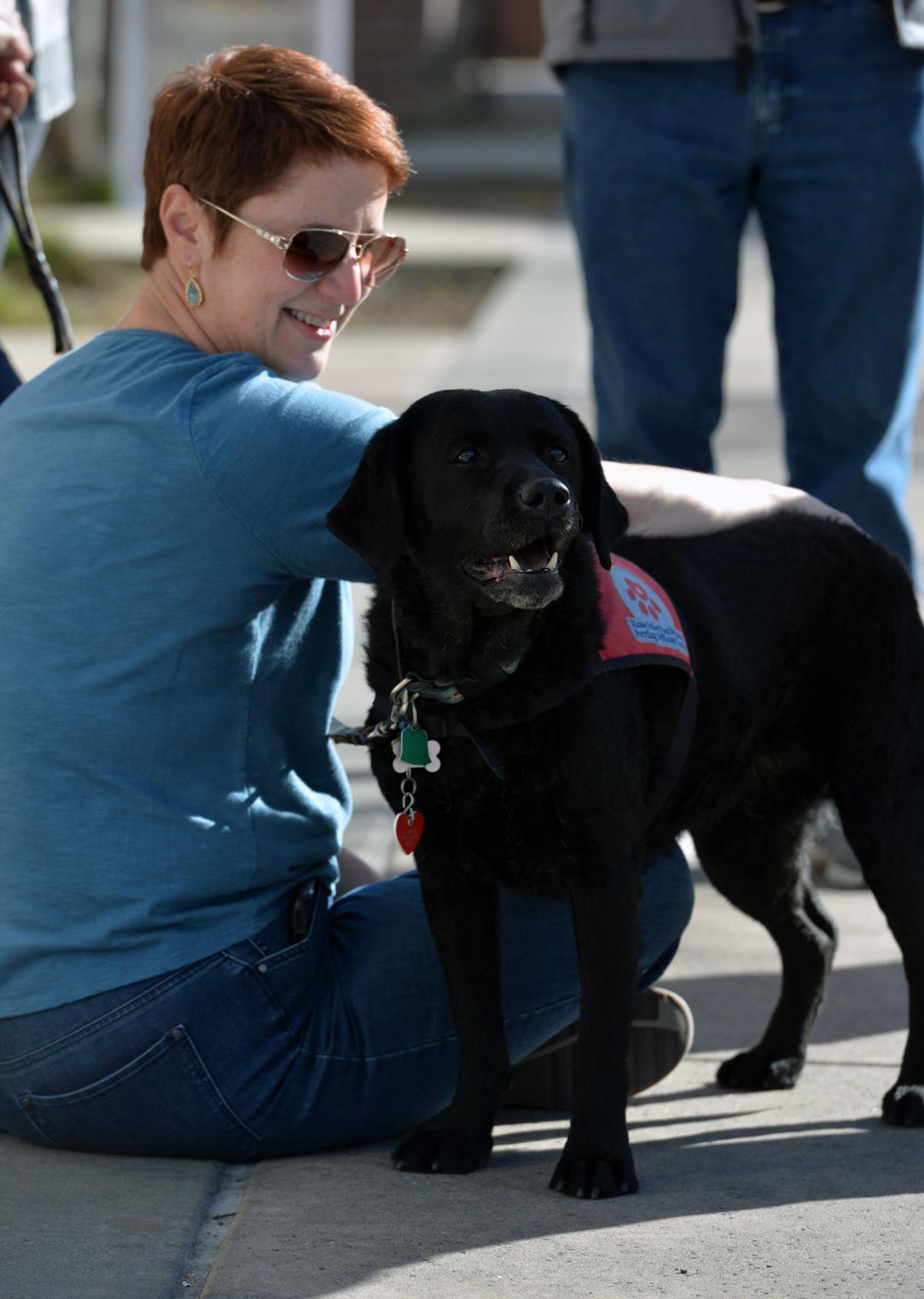 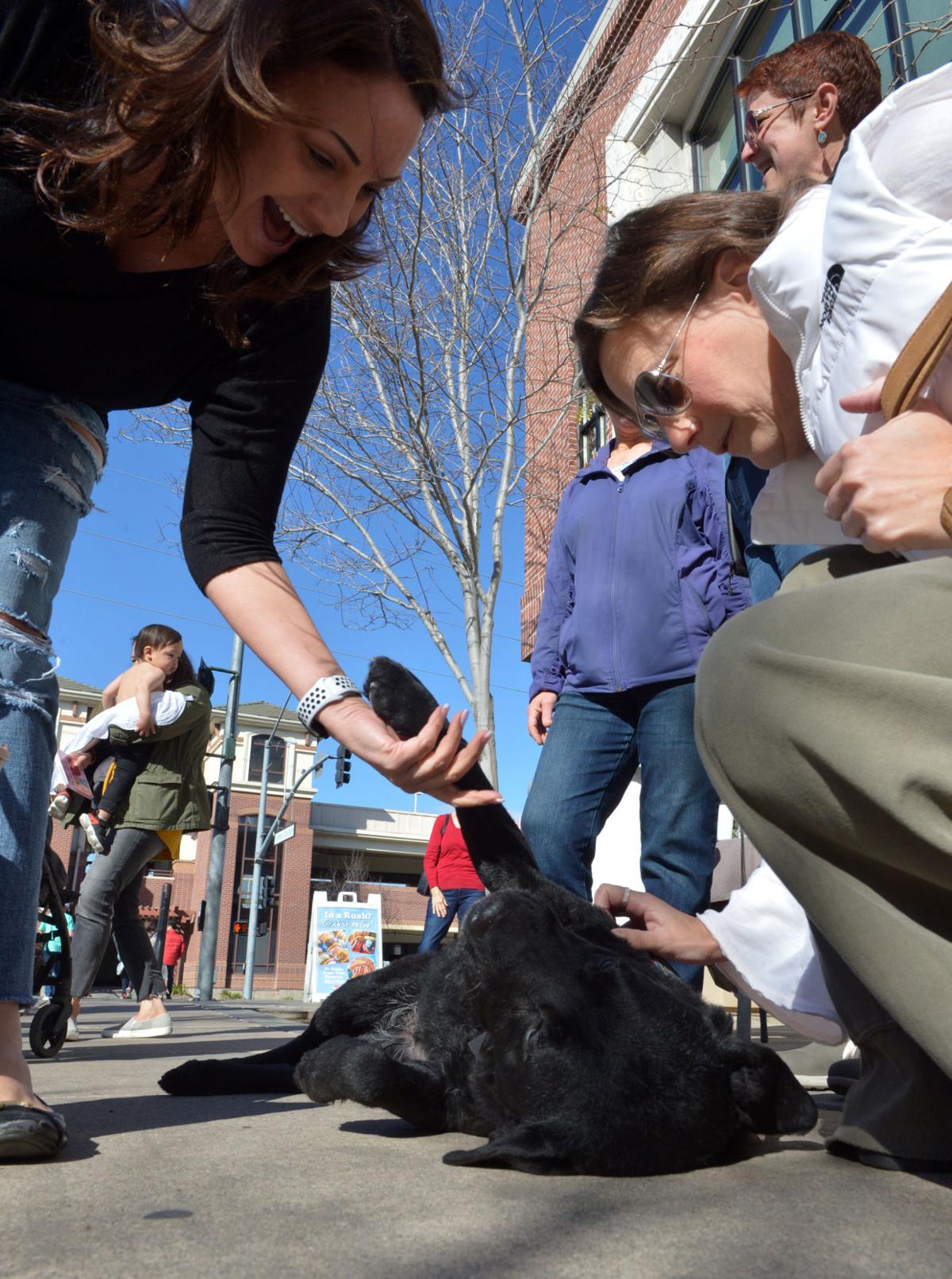 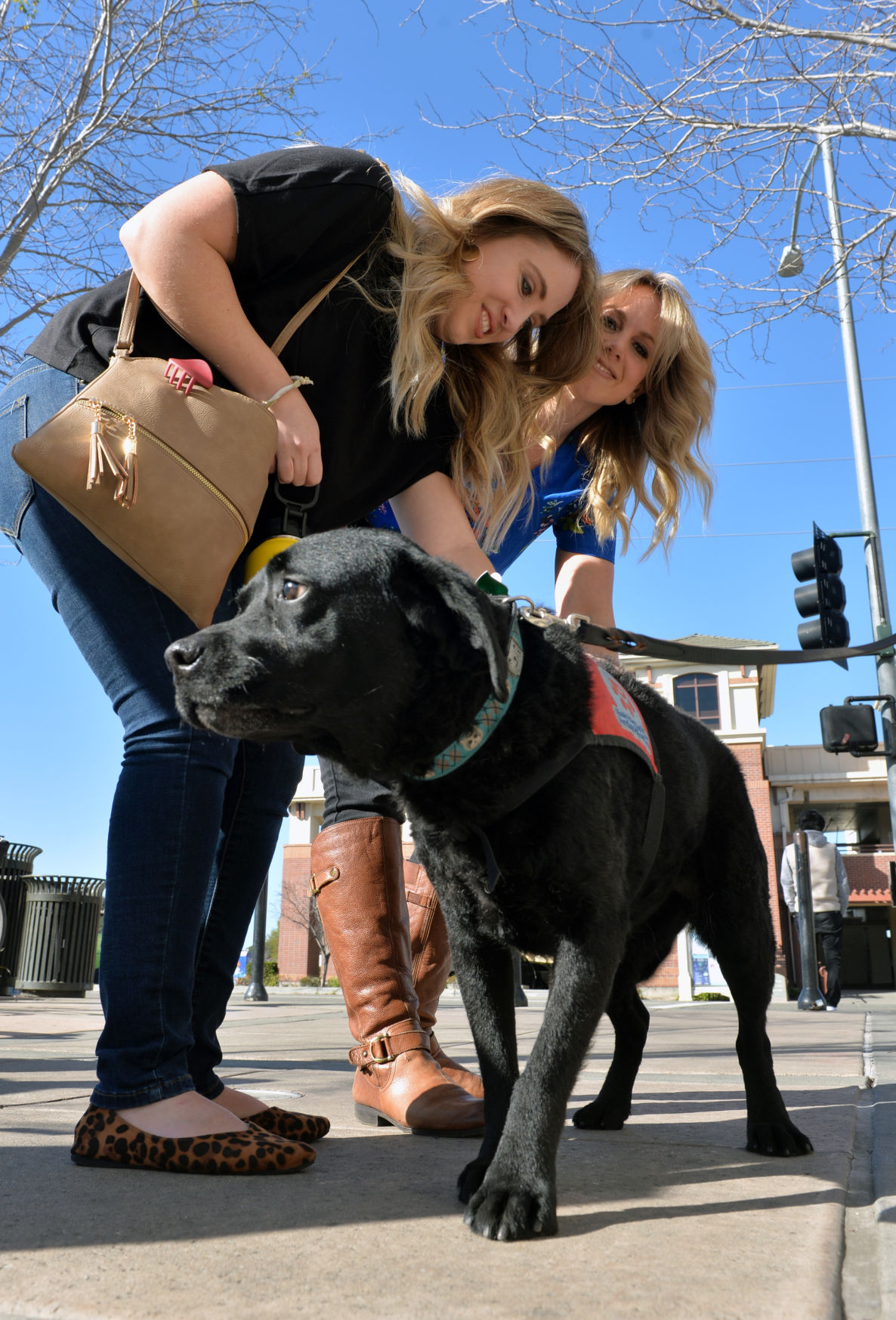 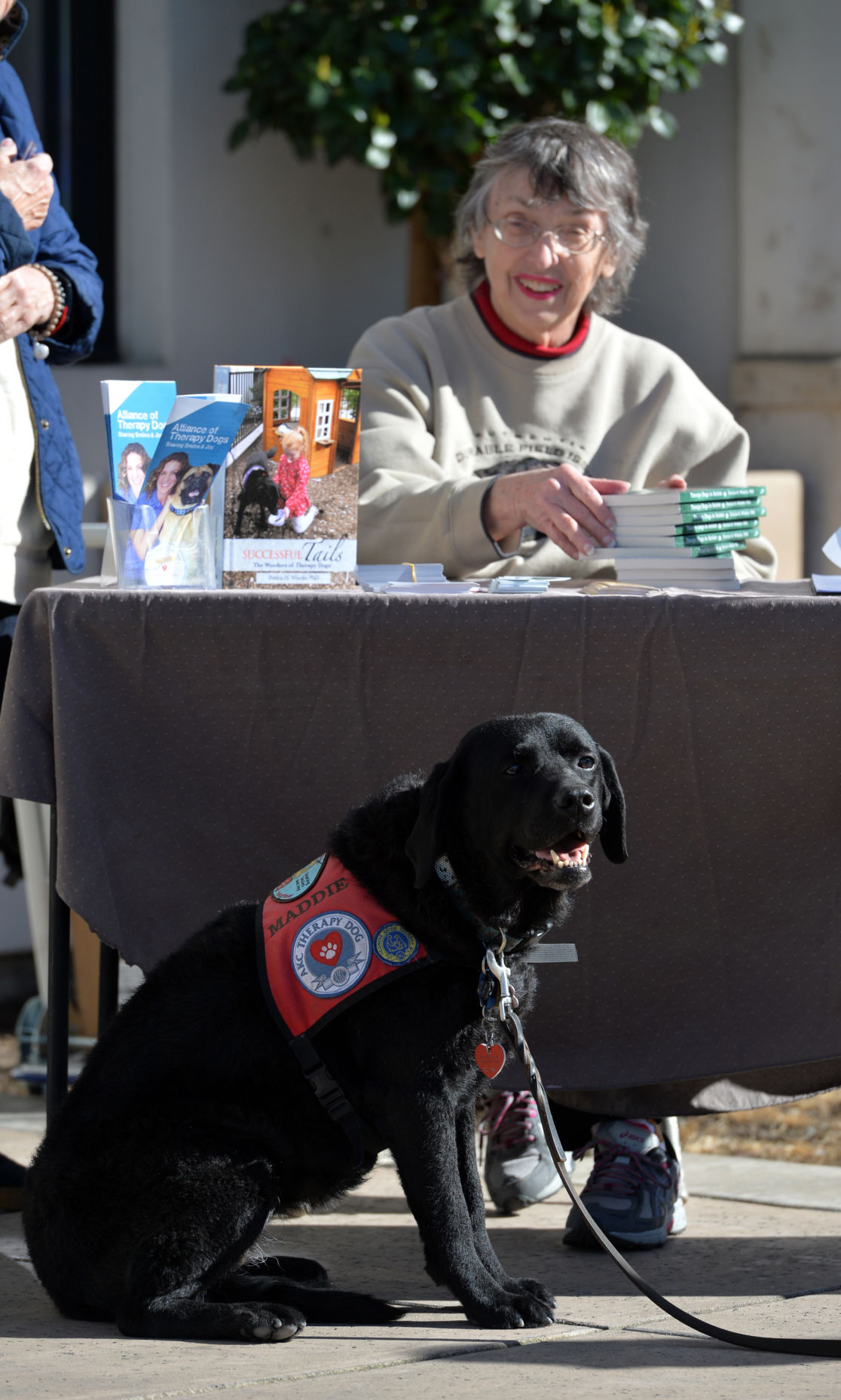 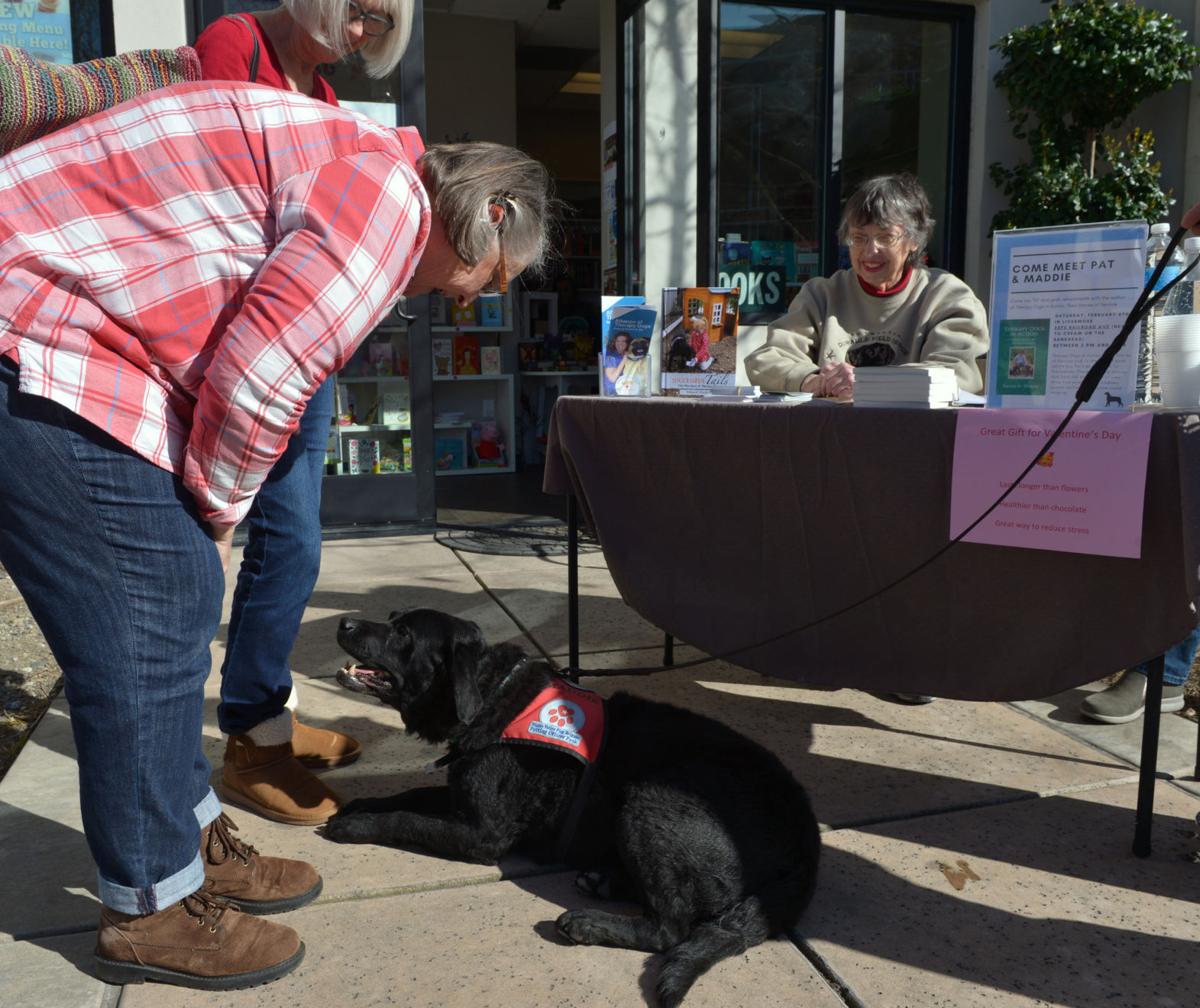 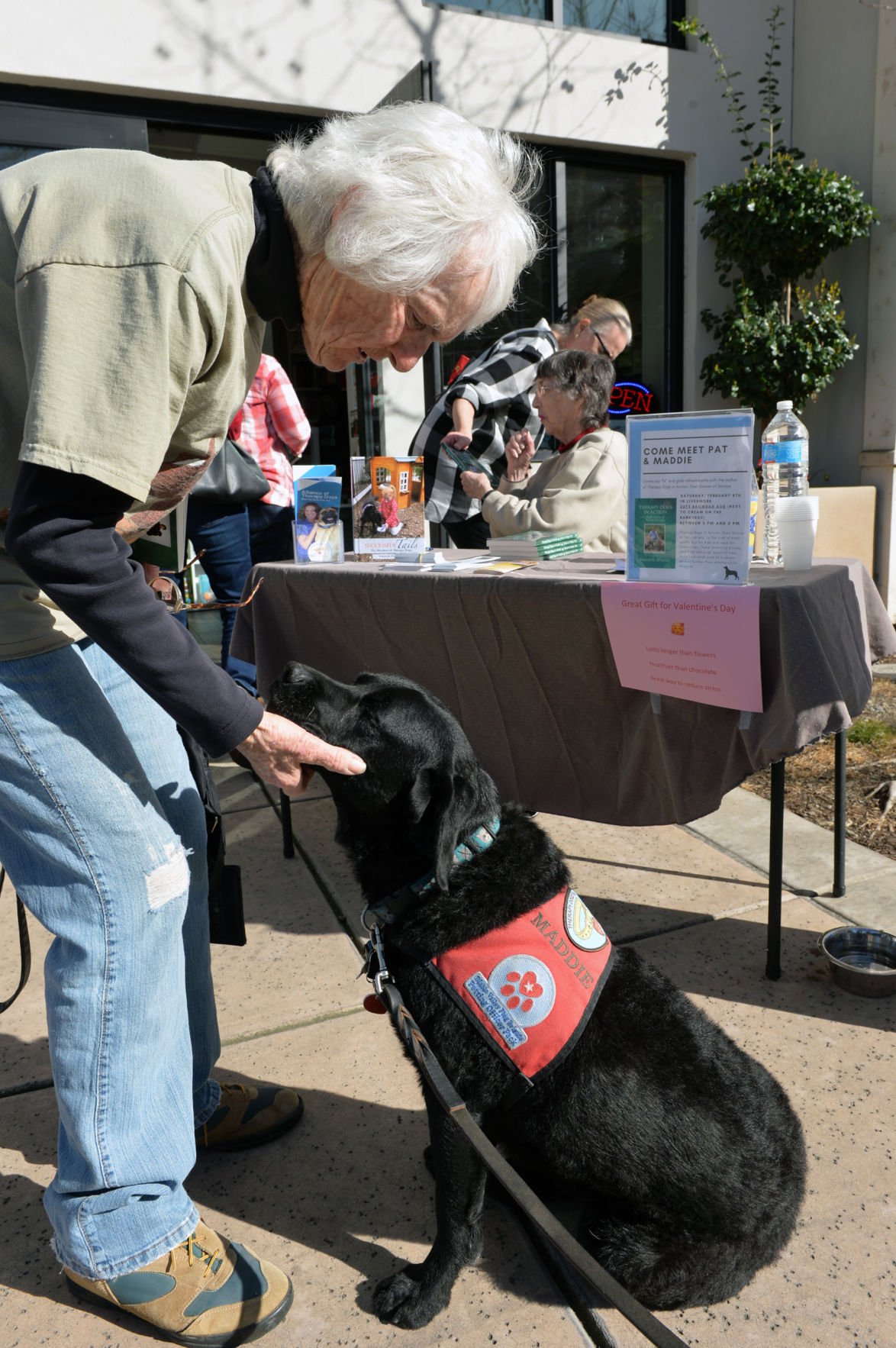 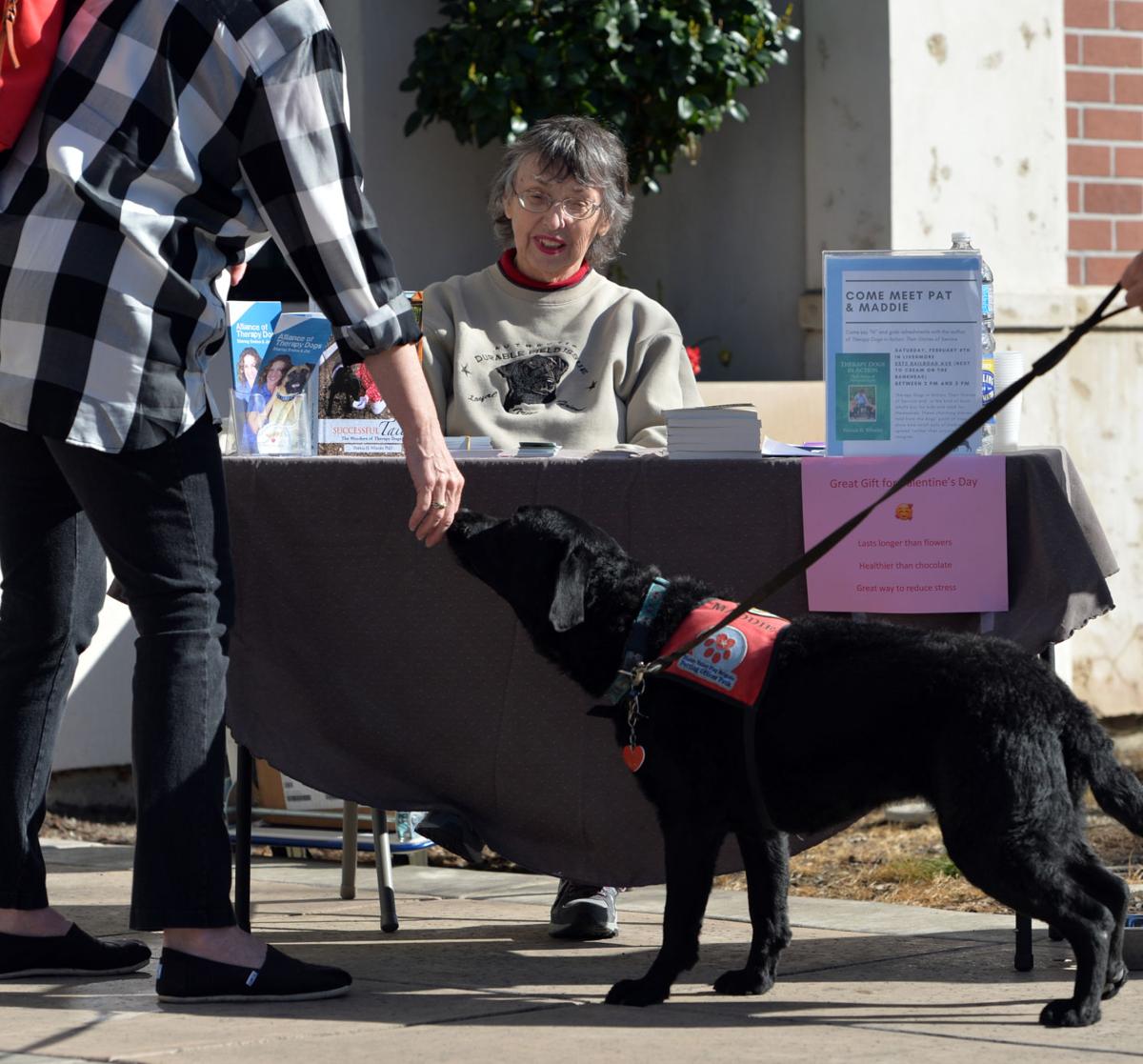 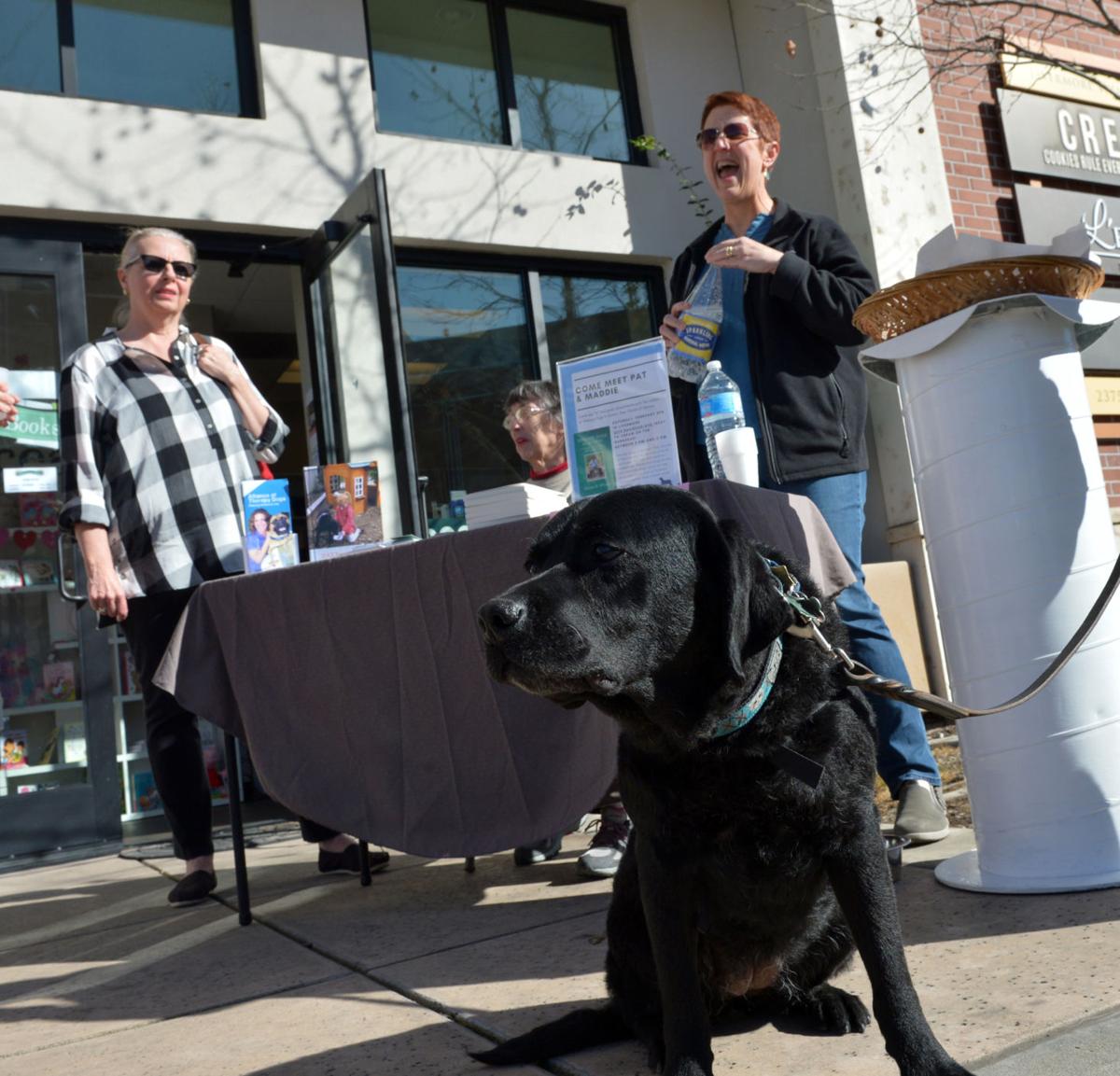 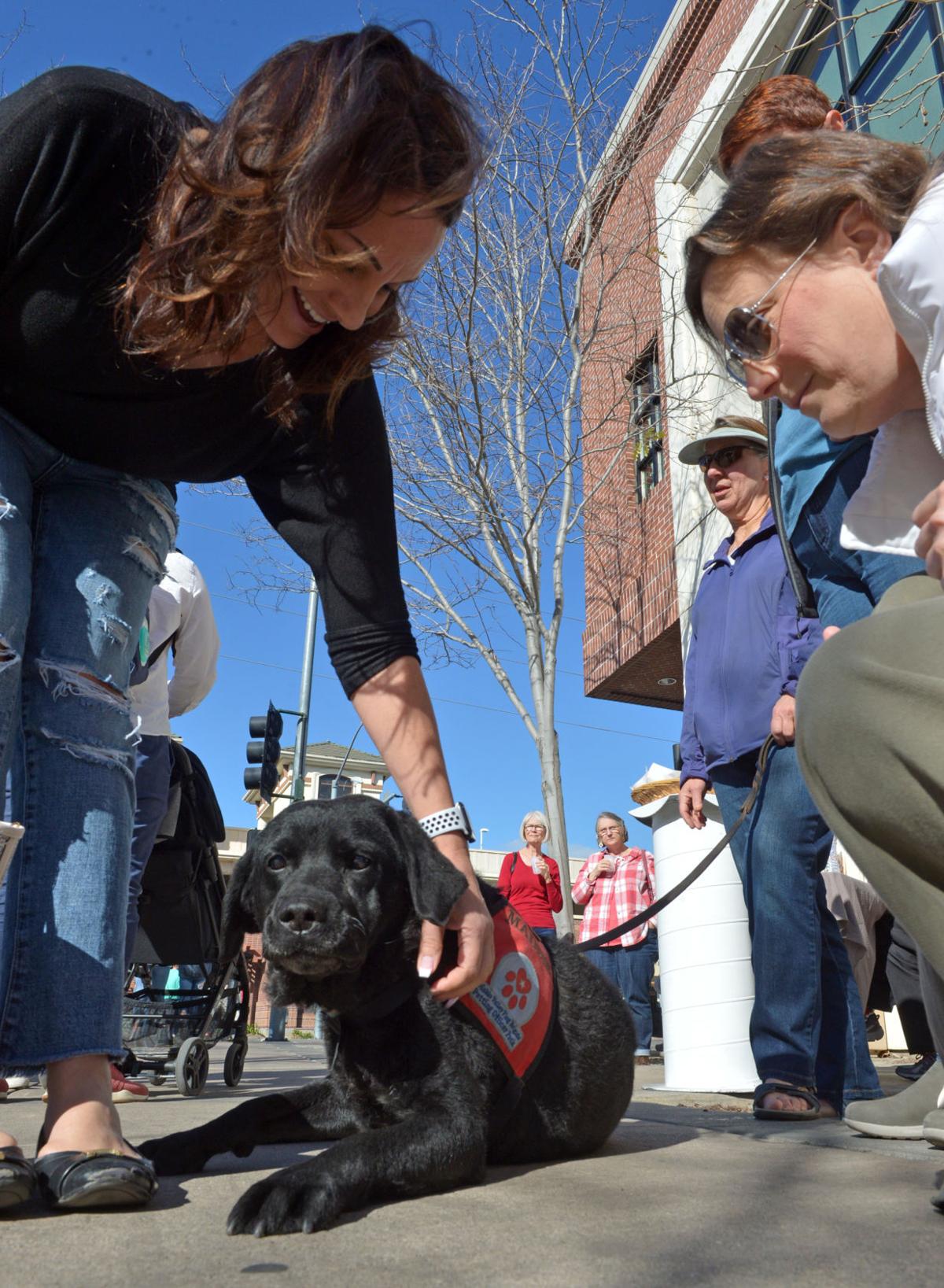 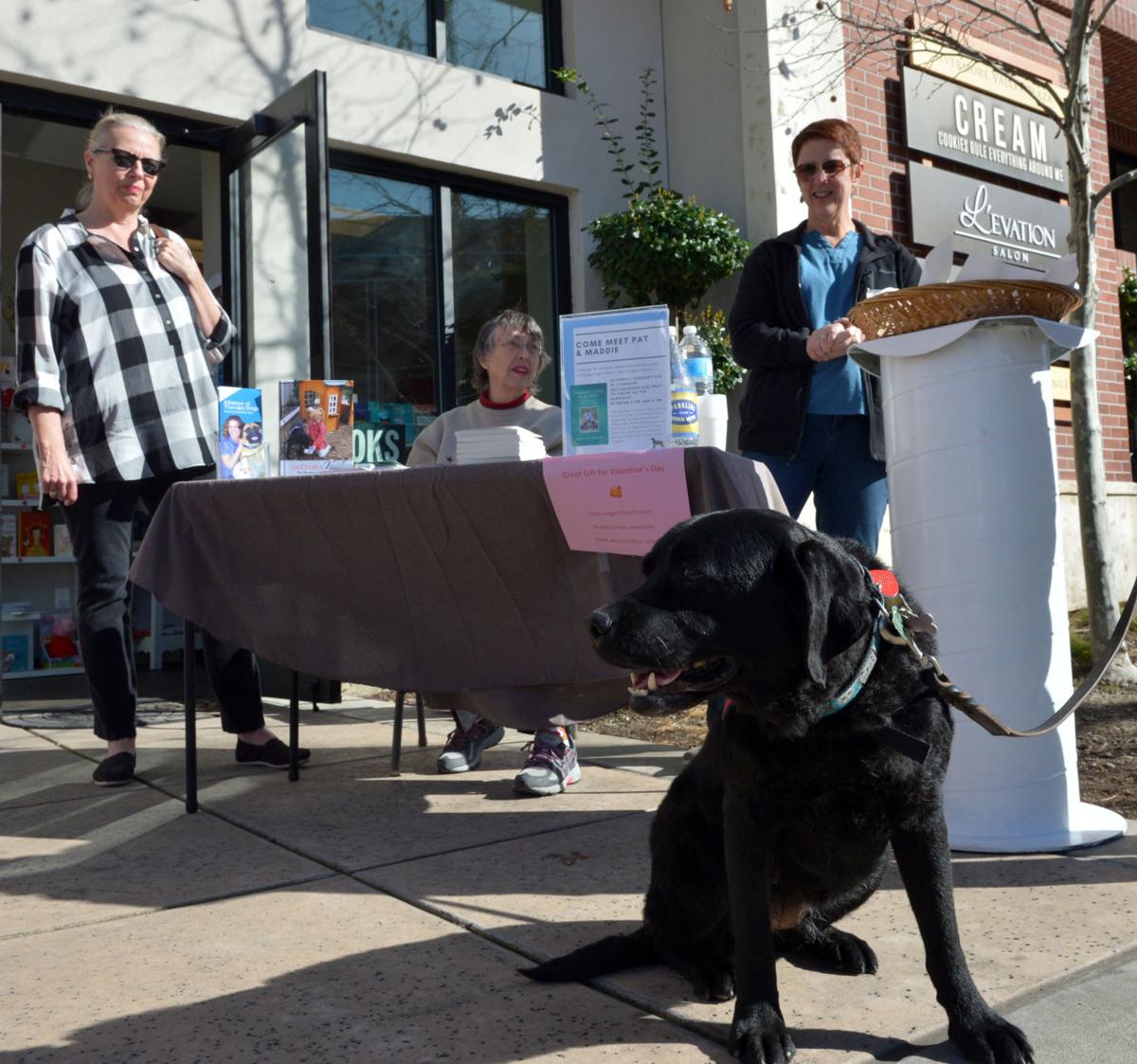 Lying on her deathbed in a nursing home, Isabel was joined by Albert. Blind, Isabel’s fingers served as her eyes. She put out her hand to touch her friend. “Albert,” she said.

“Isabel died shortly after that,” Albert says. “Her family was so pleased I was there to say goodbye to her. I was glad I could be there to share memories of our happy times together. I hope I can be there for more people.”

At least, that’s likely what Albert would have said, if Albert wasn’t a dog. Albert, named after Albert Einstein, was a black Labrador mix who served the Tri-Valley for many years with his owner Patricia Wheeler. In her recently published book, “Therapy Dogs in Action,” Wheeler relates her four working dogs’ experiences through their eyes.

“My dogs have worked with people with physical, emotional, social and cognitive challenges,” Wheeler says. “They’ve worked with people with addictions, people who have been incarcerated, and people with autism – everyone from infants to centenarians, and veterans of all ages. They’ve visited people in many settings: rehab centers, assisted-living and memory-care facilities, home visits, shelters for battered and homeless women, schools at all levels (elementary, middle, high, community college, university, and graduate schools), camps for children with challenging conditions, and community events for veterans.”

Lawrence, another black Lab, tells of a time he was at VA Palo Alto Health Care, Livermore’s Veterans Affairs hospital, before the annual rodeo parade.

“Two men in wheelchairs were in the lobby and Mommy told them that she needed their help to determine what she should tell the parade announcer about my branch of the service,” Lawrence says. “One immediately exclaimed, ‘Oh, that’s easy. Lawrence is a master sergeant in the Marines.’ Then the other quietly said, ‘Oh no, he’s a chief petting officer in the Navy.’”

The latter title stuck, and together Lawrence and Albert spent thousands of hours earning their chops. And though their backgrounds were considerably different, the two canines immediately became lifelong best buddies. Lawrence had been handpicked by his Bay Area breeder; Albert was found wandering Livermore roads.

“For therapy dogs, breed is not important. Their temperament is what’s important. Any type of dog can have a good temperament,” Wheeler says. “I was worried about this the first time I tested a pit bull. She stood there looking at me with her beautiful eyes and her mouth wide open. I thought some kid is going to put his hand in her mouth. So, I did that just to be sure it was no problem, and wondered if I would ever be able to play flute again. She just stood there, calm and looking at me. She was a wonderful therapy dog; sadly, she passed away. There are all kinds of breeds and mixes that I work with, from small Chihuahua mixes to Newfoundlands.”

Although Lawrence and Albert have also passed away, their likenesses adorn a utility box next to Rancho Las Positas School, where they lent beginning readers nonjudgmental ears.

“Mommy took Maddie and me to school one afternoon,” Wylie says. “Derek was having a hard time that day and had tears in his eyes. The teacher asked me to go outside with him and try to cheer him up. When we were outside, Derek stopped crying and played with me. I got lots of back scratches and belly rubs. Derek told my mommy that I would need a bath now. She asked him why, and he replied, ‘Because I smell bad, and now Wylie has my bad smell all over her.’

“Mommy told Derek just what I was thinking. ‘Wylie likes your smell. She likes you. Having your smell on her will help her remember this fun time with you when she gets home.’ I saw a little smile come to Derek’s face.”

“Dogs provide unconditional love. It pours out of them,” Wheeler explains. “They’re willing to listen to what people have to say, and are nonjudgmental and don’t share secrets. Touching dogs helps reduce stress and lowers blood pressure as oxytocin (the love hormone) flows. Dogs are very sensitive to people’s feelings. When a dog walks into a room, smiles appear. That doesn’t usually happen when people walk in.”

Earlier this month, Wheeler held a book signing at Towne Center Books in Livermore, accompanied by Maddie, veteran Bud Donaldson who appears on the book cover with Maddie and Wylie, and Livermore Mayor John Marchand, who wrote the foreword for “Therapy Dogs in Action.”

“This is a collection of heartwarming stories told from the perspective of four remarkable therapy dogs about their experiences,” Marchand writes. “These comforting canines seem to instinctively know what people need, and then they provide it with unflinching acceptance and unqualified love. It is also the story of Pat Wheeler, the remarkable woman who raised them and put them on the inspirational path that became their life’s work.”

Wheeler became a therapy dog handler in 2002, a few months after her husband passed away.

“Lawrence was a wonderful companion for me, always there to comfort me,” she says. “We started at the VA and soon added many more sites in Livermore,” she says. “Since 2012, I have been a tester/observer with the Alliance of Therapy Dogs, one of the three national therapy dog organizations in the U.S. I’ve tested and observed over 200 potential teams to date.”

Additionally, Wheeler has made presentations to dog breed clubs, civic organizations, classes in psychology at Las Positas College, classes in ecotherapy at John F. Kennedy University, nursing assistants at Doctors Hospital in Manteca, and nursing students at California State University, East Bay. She has also taught a community education class at Las Positas College on how to become a therapy dog team.

Most recently, “I visited students and staff at Dublin High School the first day back at school, on Jan. 7, to help them cope with the death of three students in a car crash in Pleasanton on Christmas night.”

Visits from Wheeler and her therapy dogs are always in high demand.

“Our campers have benefitted greatly from having therapy dogs at our campus,” says Kristina Kind, program coordinator for the Taylor Family Foundation’s Camp Arroyo for kids with special needs. “The dogs are so loved that recently campers were given the choice of climbing at the rock wall or being with the therapy dogs. Campers enthusiastically declared that they wanted to cancel the rock climbing and be with the dogs! The impact is great. I love it when campers come back year after year and are so excited to see their dog friends from the year before.”

“Therapy Dogs in Action,” and Wheeler’s previous book, “Successful Tails: The Wonders of Therapy Dogs,” are available at Towne Center Books in Livermore or Pleasanton, or from online retailers including Amazon and Barnes & Noble. Although Wheeler doesn’t have any upcoming signings on her schedule, she hopes to have a signing at Towne Center Books in Pleasanton soon. (To receive notice of the signing, go to www.townecenterbooks.com.) To learn more about Wheeler and her therapy dogs, go to www.phwheeler.com.