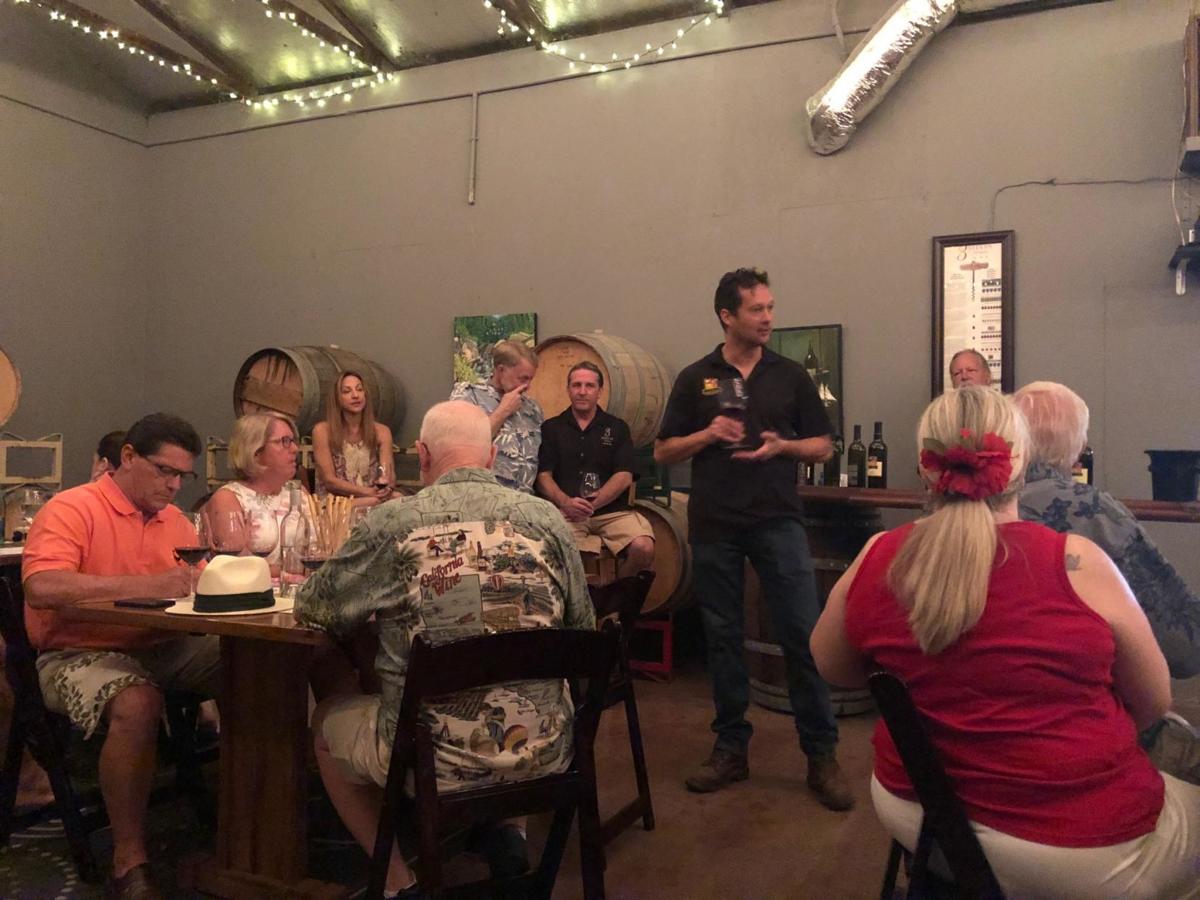 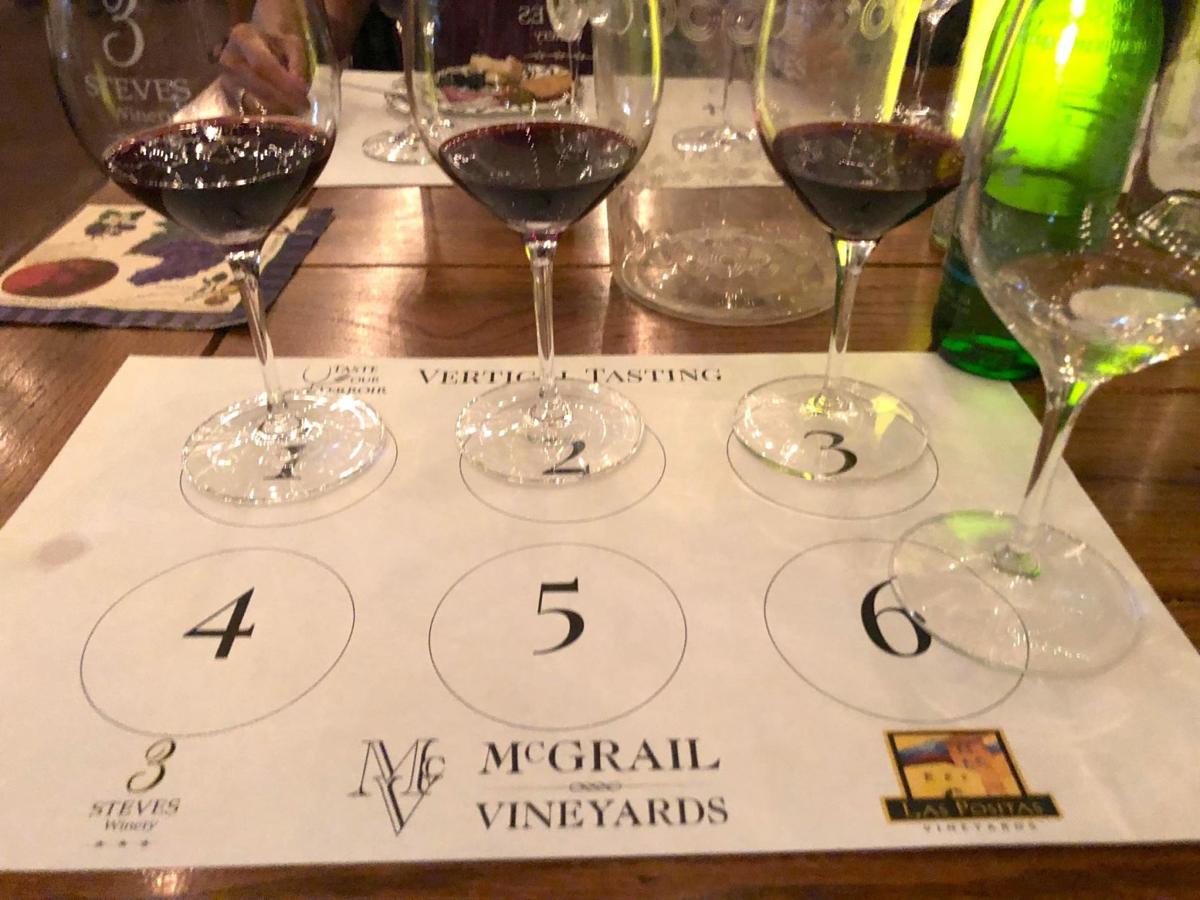 Taste Our Terroir’s sold out lineup of seminars and outings this year ran the gamut from a rosé party at Retzlaff to a falconry demonstration with Kimmie Spears, of Embodied Wines, at el Sol. There were bubbles at Page Mill and Somm Secrets revealed at McGrail, but nothing had the Midas touch of the Sweepstakes Award Winning Wineries seminar at 3 Steves. The San Francisco Chronicle, which pulls in more than 3000 entries from all over the US and around the world, is a tough one to win, as the competition is fierce, doubling the import of the bragging rights that go to the winning wineries. Since the competition takes place the first week of January, wineries have a whole year to brag on their big wins and Gold medal wines.

It’s a pretty high honor for the Livermore Valley that three different wineries from this AVA have won Best Red at the SF Chronicle over the last decade, besting all other entries to take the coveted honor. It’s also rare to have the opportunity to taste through verticals of the varietals produced by the winemakers who won these awards. We did just that at the Taste Our Terroir Winning Wines Seminar held at 3 Steves on Sunday of TOT weekend. The tasting featured three separate three-year verticals of wines from 3 Steves, Las Positas and McGrail. If you’re keeping score, that’s nine wines.

We started off with some winning whites from these wineries – wines that had scored medals at other competitions, namely Uncorked 2019. The Las Positas Verdelho was a big hit: juicy, vibrant, and as crazy wild as a Sauv Blanc, but with more depth and less edge. It set the tone nicely for a retrospective journey, courtesy of Steve Burman, Brent Amos and Mark Clarin, who walked us through the back stories of the winning wines that all took the big prize, Best Red at the SF Chronicle, over the years.

Livermore Valley’s winning tradition at the Chronicle of late began with Mark Clarin of McGrail Vineyards, who won in 2010 for the 2008 Reserve Cabernet from the estate vineyard, which was planted in 1999. “Jim McGrail called me at like 8 o’clock at night,” says Clarin, “So I expected it might be something seriously important, like a broken fence or something. Instead he said, ‘Dude! We won the Chronicle!’ I was flabbergasted!”

Three years later, three guys named Steve went on to nab Best Red at the 2013 SF Competition for their 2011 Old Vine Zin from San Benito. Recalls Burman, “When we opened our winery, we were so proud to be on Greenville Road, next door to the big winners of the Chronicle, McGrail Vineyards! Never did we for a moment think we’d end up winning the same award. Collin called to see if I was around and dropped in, bearing champagne and the good news. I had no idea we’d won! That’s what I love about this community: the way we share in each other’s triumphs, the way we help each other, no matter what. I have hundreds of stories of how people have helped us since we came here.”

Then, this year, Brent Amos of Las Positas got the good news that his 2016 Malbec had taken Best Red honors. As one of the judges who had the good fortune of tasting and voting for this wine in the final sweepstakes, I knew Brent would be psyched to hear the news. He was pretty terse when I called. I think he said “Wow! No kidding.” When I told him the initial wine we were poured during sweepstakes was corked, necessitating a repour from a new bottle, he laughed and said, “I’m sure glad I changed cork suppliers!”

The tasting began with a vertical of 3 Steves Old Vine Zins, beginning with the 2012 and ending with the 2014. All were library wines. The SF Chron winner, the 2011, is long since sold out. This old vine zin comes from the De Rose Vineyard in San Benito County, which was planted in 1905. That most certainly qualifies it for the name the 3 Steves gave it: Ancient Vines Zinfandel.

The 2012, which Burman made while their production facilities were still at Tenuta, smelled like a ripe berry patch, with big blueberry flavors. Winemaker Rosie Fierro thought it smelled like a cherry tootsie roll pop, which Burman said was probably from the D254 yeast he used to accentuate the cherry flavors. Not having a budget for new oak, they used 40% once-used French barrels that had previously been filled with Merlot. The 2013, for which they purchased 25% new American oak, had lots of sweet blackberry, pepper and chocolate. The 2014 was much riper, with lots of plum and juicy clove on the smooth palate that finished with an unmistakable Zin coda. It’s like a very large dog that insists on sitting on your lap and won’t get off.

Mark Clarin remarked that you could tell these are old vine Zins because they have huge color and really sweet juicy flavors. “It’s too bad UC Davis screwed around with Zin,” he commented. “These vines were planted well before they got their hands on it!” He noted how the newer clones of Zin which came out of Davis don’t ripen evenly and are color-challenged. He described Zin as the starter wine for many people. “It’s like coffee. You start off drinking it with sugar and cream and everything else, and then eventually appreciate the straight stuff.”

Rosie remarked that all three had a “rainbow of structure” that made them all flow really well across the palate. Burman said Zin is so quintessentially Californian that we’ve claimed it as our grape. It tends to be fun and light-hearted, and needs peanut butter because it’s so jammy. He remarked, “I do this for the art of it. I’m not looking to replicate anything from year to year. That’s a good thing, because it’s virtually impossible to make the same wine twice!”

Clarin said, referring to the murky past of Zin’s origins, “We know the history of Cabernet, Merlot and Malbec, but we are still trying to figure out Zin.” He shared that it was a favorite in the New World right from the time it landed here because it has a big berry and high yield. “It was perfect for making wines for the masses, 100 years ago,” he said. “Quite literally, the Catholic church loved Zin because it yielded well and made a good altar wine.”

Many seemed content to worship in the church of Zin, but we had three vintages of Malbec, 2014—2106 to taste next. Turns out the vineyard in Kalthoff Common from whence these three Malbecs including the winning 2016 sprung forth, used to belong to the Maier’s. The the current owner, David Beck, still sells them the fruit. Meanwhile, they’ve planted ¾ of an acre of the stuff near the winery.

The 2014 Las Positas Malbec shows aromatics of blood orange, iron, gravel and tobacco, revealing great structure and layer upon layer of deep, satisfying flavor that makes this among the biggest and boldest-fruited of the Bordeaux varieties. The 2105 is a tad more earthy and reductive, with horse tack, vanilla and root beer. Its flavors are rhubarb pie, juicy and ripe, with great acid and a finish of oatmeal raisin cookies. The 2016 has an awesomely attractive nose, with glorious strawberry and cherry, along with plum and sage, and a hint of mint. Overall, it is showing mouthwatering acidity and beautiful traces of tobacco and peat on the finish. This is complex stuff, exhibiting phenomenal elegance and power.

Amos says he loves the structure of Malbec. He makes a lot of different wines and does a lot of blending. “Malbec really shifts the structure of a Bordeaux blend,” Amos notes. “I tend to use 30 to 40% new French oak on Malbec, with a little American sometimes. It’s different every year. America is much more imposing. You need to use less to get the same impact. French is much more elegant.”

Clarin chimed in here, saying, “My favorite thing about wine is you have to wait to see what it’s really all about. Wine is like us. Imagine if someone shoved you in a bottle and put you in a cave for a few years and then pulled out the cork!”

By this time, Rosie had fallen head over hills for the 2016 Malbec, proclaiming, “This is like some hot Spanish guy! I’m in love with it!”

Then it was Mark’s turn to take us on a tour of the Cabernets from McGrail. We began with the 2012, which presents big cigar, horse barn tack and leather and cassis. It’s chewy, with dusty tannins, and is just beginning to lose fruit, although it retains apple skin and dried cherry, along with big tannins. It was done in 60% new French oak, which is a lot of wood. The 2013 is even more monstrous in the tannin department, showing sweet cherry, blueberry, cassis and mulberry, and has plentiful acid to counter the gravelly tannins. This turns out to be Mark’s fave of the lot: he likes them monstrous. My favorite – and Rosie’s too – was the 2014, with its more elegant presentation of chocolate covered blueberries, cassis and licorice, showing off gorgeous notes of fine garment leather and fennel, all wound around a lovely satiny texture that is just sensational in the mouth.

Clarin told us that Jim McGrail started selling Cabernet fruit from the vineyard in 2002, and the customer list was a Who’s Who in Livermore at that time: Crooked Vine Dale Vaughn Bowen, Steven Kent, Tenuta, Ruby Hill and others.

In 2005, the McGrails had a huge crop, as did most vineyard in California, giving him an extra 10 tons from which to start making wine. Clarin met the McGrails in 2006, as they wanted to interview him to be consulting winemaker. Recalls Clarin, “So I go to their house and Ginger says, ‘Can you make Chardonnay?’ ‘Heck, yeah,’ I said. To which she replied, ‘I’m good!’ and the interview was over. The rest is history!”

Things have changed considerably, as they now have three different lines of Cabernet, all done with different oak treatments, and of course, Chardonnay. With the purchase of Dr. Aguirre’s vineyard, they now have all five Bordeaux varieties as well as Chardonnay. They are intending to grow all their own fruit.

Says Clarin, “Look at a wine label. The more detail it has on it about where it originates, generally the better the wine. Vineyard designates tell you exactly where the wine came from, and usually, those wines are the best ones.”

The attendees all seemed to appreciate the unique opportunity to taste wines from three master winemakers, and asked lots of great questions. One remarked, “It’s special to share verticals. And Livermore has so much great family. Let’s not become Napa!”

The attendees all seemed to appreciate the unique opportunity to taste wines from three master winemakers, and asked lots of great questions. One remarked, “It’s special to share verticals. And Livermore has so much great family. Let’s not become Napa!”