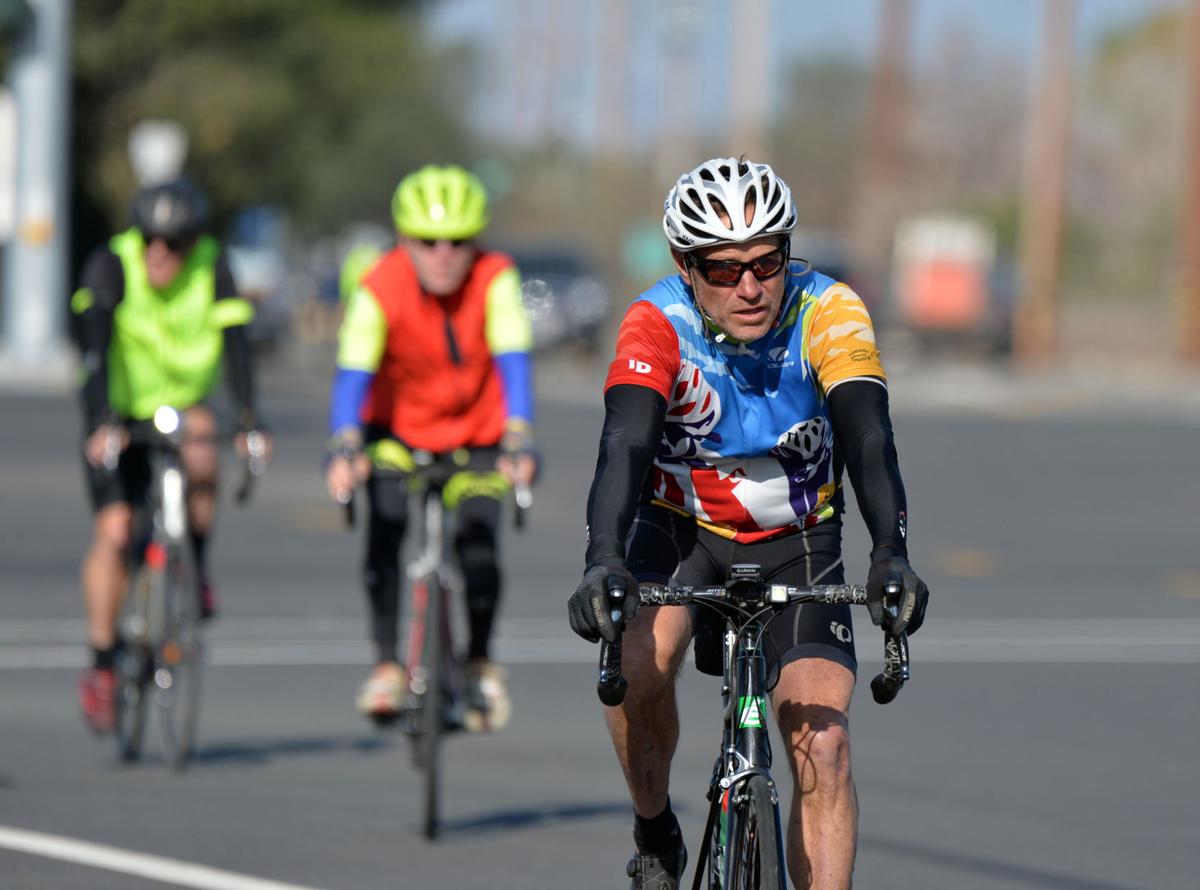 Caltrans is being asked to consider safety improvements for the Highway 84 (Isabel Avenue) crossing in Livermore. (Photos - Doug Jorgensen) 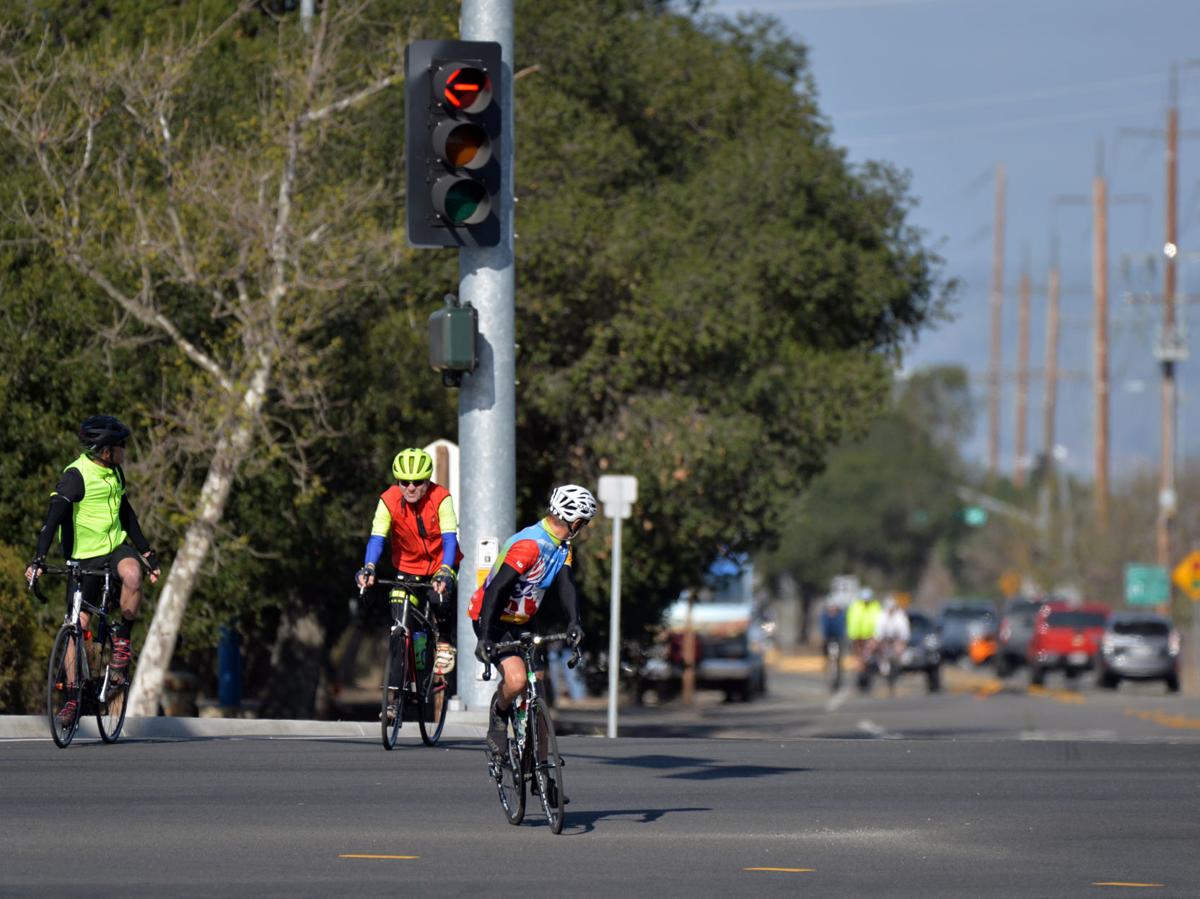 For months, the Pleasanton Pedalers cycling club has drawn what they call a potential deathtrap in Livermore to the attention of local and state traffic engineers. 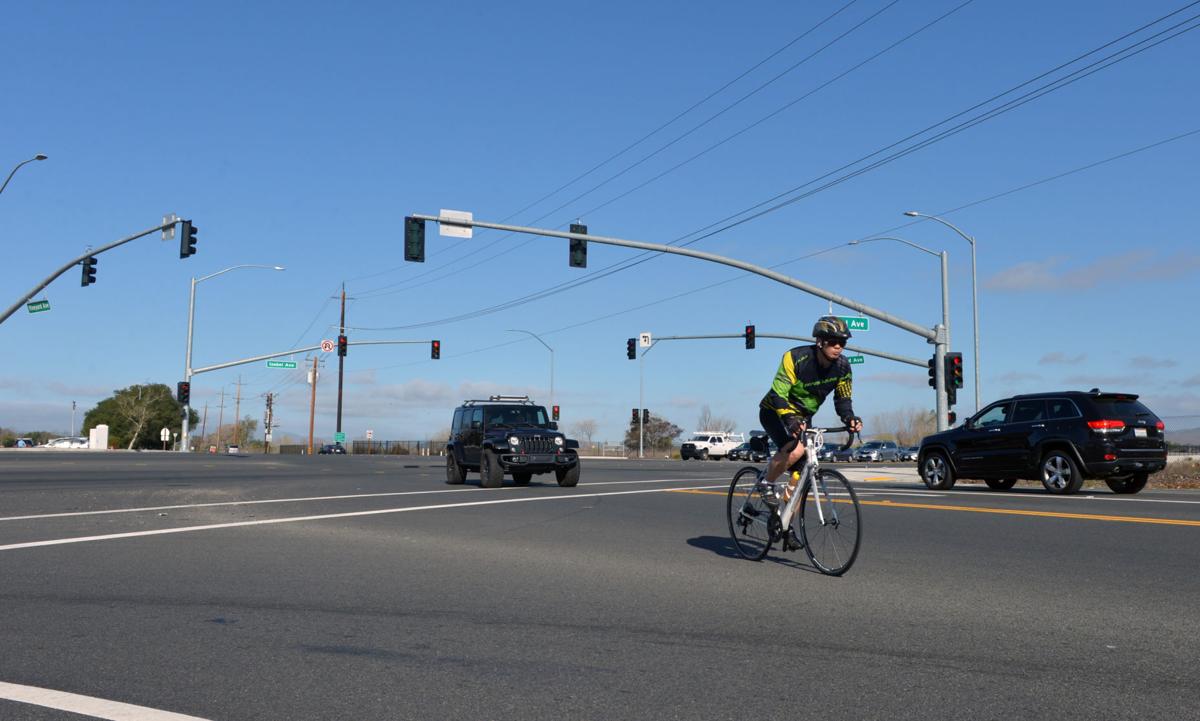 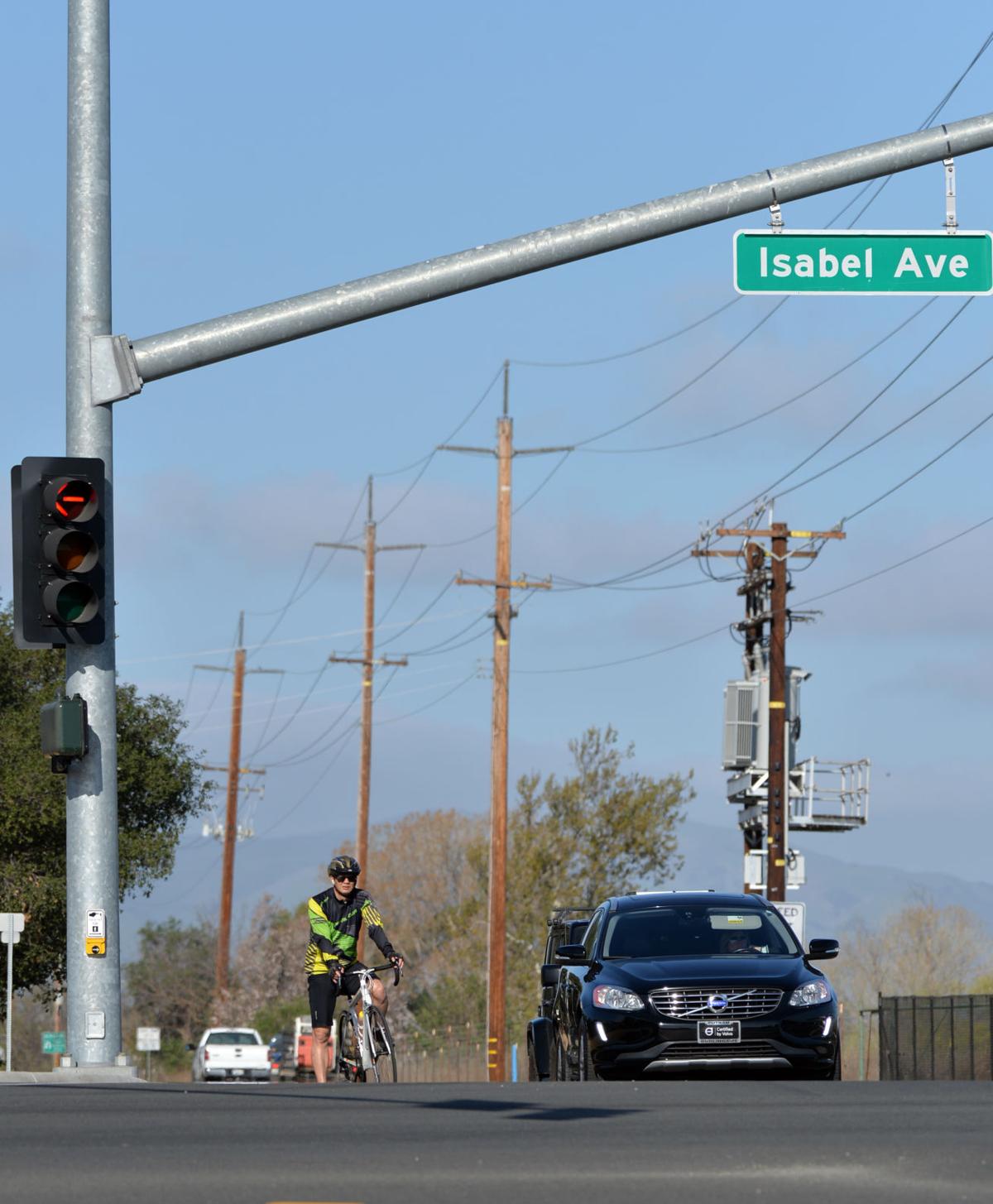 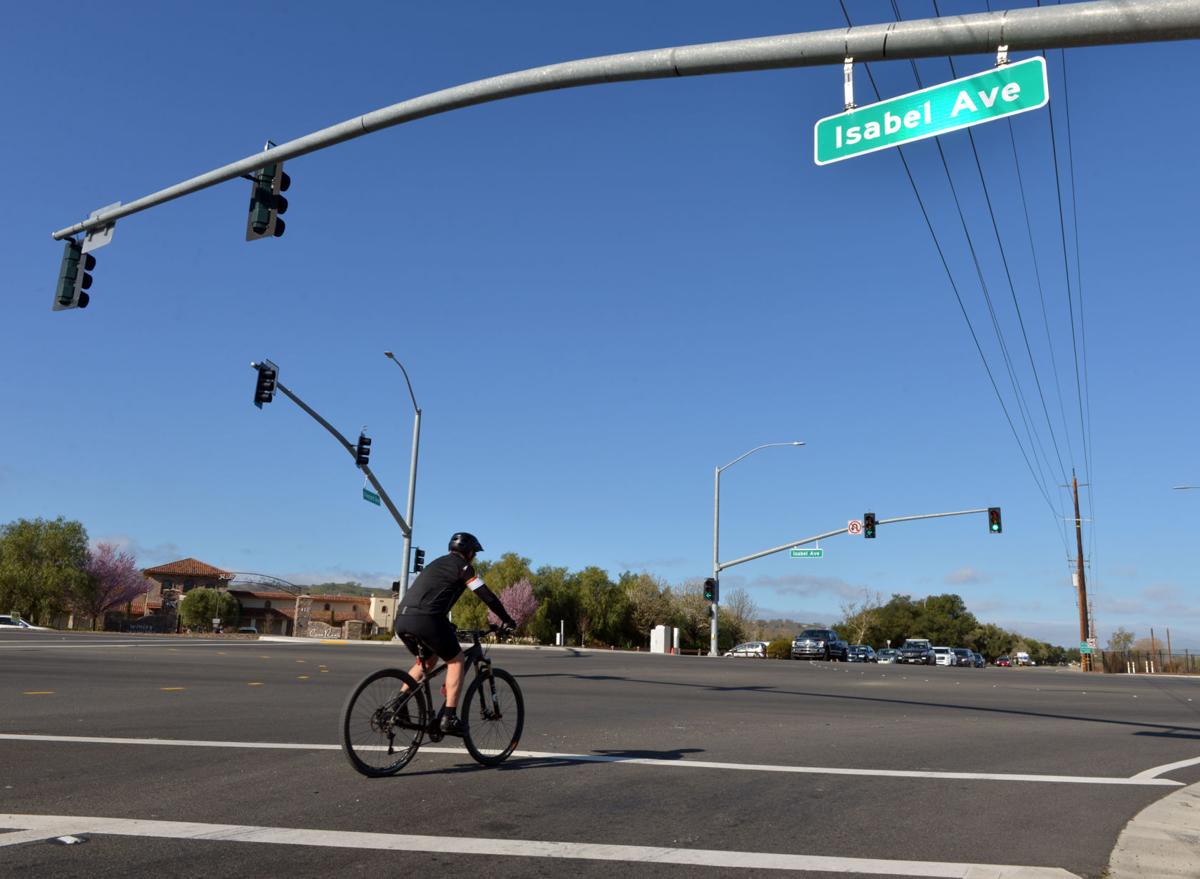 Caltrans is being asked to consider safety improvements for the Highway 84 (Isabel Avenue) crossing in Livermore. (Photos - Doug Jorgensen)

For months, the Pleasanton Pedalers cycling club has drawn what they call a potential deathtrap in Livermore to the attention of local and state traffic engineers.

Pleasanton Pedalers, a cycling club of retired seniors from throughout the region, is calling on Caltrans to make a busy intersection in Livermore safer for bicyclists and pedestrians.

People on bikes riding west toward Pleasanton on Vineyard Avenue, where it crosses the newly widened Highway 84 (Isabel Avenue) expressway, have been stranded in the middle of two lanes of fast-moving traffic on the popular route to Silicon Valley.

For months, the cycling club, made up of more than 400 retired cyclists from Martinez to Sunol, has drawn what they call a potential deathtrap to the attention of local and state traffic engineers.

They say a short green light and shorter yellow light do not give bicyclists enough time to safely clear five lanes of traffic, wide shoulders and two turning lanes.

“There are quite a few more people on bicycles these days than there has been in the past,” said Steven McGinnis, a founder and volunteer ride leader of the club Pleasanton Pedalers. “Traffic engineers have focused on throughput of vehicles for years. State standards need to be modernized to recognize what’s going on on our streets.”

The Independent contacted Caltrans on Feb. 24 seeking information about the intersection and what, if anything, was being done to address the cycling club’s concerns. Highway 84 at Vineyard Avenue is also known as Isabel Avenue.

An agency spokesman on Feb. 25 said answers would be provided to the reporter within a few days. Requests for updates were sent to the spokesperson on March 2, March 9, and March 11. As of press time, Caltrans has not answered our questions.

The stretch of Highway 84 is part of a major Caltrans widening project designed to increase capacity and improve traffic circulation on the highway. The project is intended to bring the road up to expressway standards, which allows the speed limit to increase to 55 mph.

McGinnis, a retired lawyer, has long advocated for bicycle and pedestrian safety improvements through his work with the cycling club and his service on Pleasanton’s Bicycle, Pedestrian & Trails Committee.

But it wasn’t until the June 2016 traffic-related death of Gail Turner, 72, a friend and Pedalers club member, that he saw community support around bicycle safety start to galvanize.

Turner was riding her bike south on Valley Avenue when she was struck and killed by a car heading east on Stanley Boulevard.

The police report states Turner crossed on a red light. McGinnis, who described Turner as a cautious cyclist, believes she entered the intersection before the light turned red, but was unable to clear seven lanes of traffic before the cross-traffic light turned green.

Within a year, Pleasanton made significant safety improvements to the site, and became the first city in the Tri-Valley to install what is known as a protected intersection: a Dutch-style bike friendly crossing that separates bicycle and pedestrian crossings from car traffic. The intersection features specially-marked bike lanes that are protected from traffic by a planter on Stanley Boulevard and wide striping on Bernal Avenue.

The cycling club rides through Livermore’s extensive network of bicycle lanes and paths several times a month, starting at the Pleasanton Senior Center then over to Sycamore Grove Park in Livermore, making stops for refreshments at Peet’s Coffee downtown and the Daily Grind at the Library. The group’s usual route on the return trip crosses the tricky Highway 84 intersection.

McGinnis shared with The Independent an email he sent in November to Livermore and Pleasanton transportation officials concerning the intersection. The email was forwarded to a Caltrans official in early December.

“Please be advised that the light at this location does not detect bicycles and hold the light until cyclists can safely cross,” he wrote. “Because of the speed of vehicles southbound on Isabel, a life-threatening condition is created by the short light, and shorter yellow light, for pedestrians and people on bicycles. There is no crosswalk or light delay button for the westbound direction, although there is an opening that invites pedestrians and cyclists to cross at the corner.”

On Feb. 18, a Caltrans engineer acknowledged a bike loop detector at the intersection was not working and said it would be fixed within a month.

The engineer also acknowledged the timing of the green light at the intersection was short, and would be increased to 9.8 seconds, which is called for by the standards Caltrans follows. But the yellow light for westbound traffic on Vineyard was proper, and would not be changed, according to the email.

The changes only made the intersection more dangerous, McGinnis said.

A few days after McGinnis and the Pedalers got word of the timing changes, a group of seven of its cyclists, including McGinnis, rolled up to the stop line on westbound Vineyard Avenue at Highway 84. When the light turned green, only three of the cyclists were able to make it across before it turned red.

The other four were stuck in the middle of the two southbound lanes of the expressway.

“If a vehicle had been timing the lights at the usual speed of the southbound lanes, someone would have died,” he wrote in the email. McGinnis asked for a supervisor to meet him on site — with a bicycle — to cross through traffic.

“The view, and the speed, is quite different when you aren’t crossing the street with 300 horsepower surrounded by a ton of steel,” he wrote.

McGinnis said the engineer’s supervisor obliged. According to McGinnis, after three attempts, the supervisor was unable to clear the intersection on a bike during the 9.8 second green light cycle.

The Independent asked the Caltrans Spokesman in an email on March 9 to confirm McGinnis’ description of the encounter. As of press time, Caltrans did not respond.

McGinnis, who called the intersection a “Dangerous Design Flaw” in his email to Caltrans, said he believes the engineers are following the prescribed formula for the intersection.

“The department of transportation was trying to do the right thing,” he said. “I think they’re working hard to fix the problem.”

Rick Bosadas, a worker at St. Michael's Cemetery on East Avenue in Livermore, places American flags at the graves of armed service members in honor of Memorial Day, a task typically completed by the Scouts in non-COVID-19 times. (Photos - Dou…