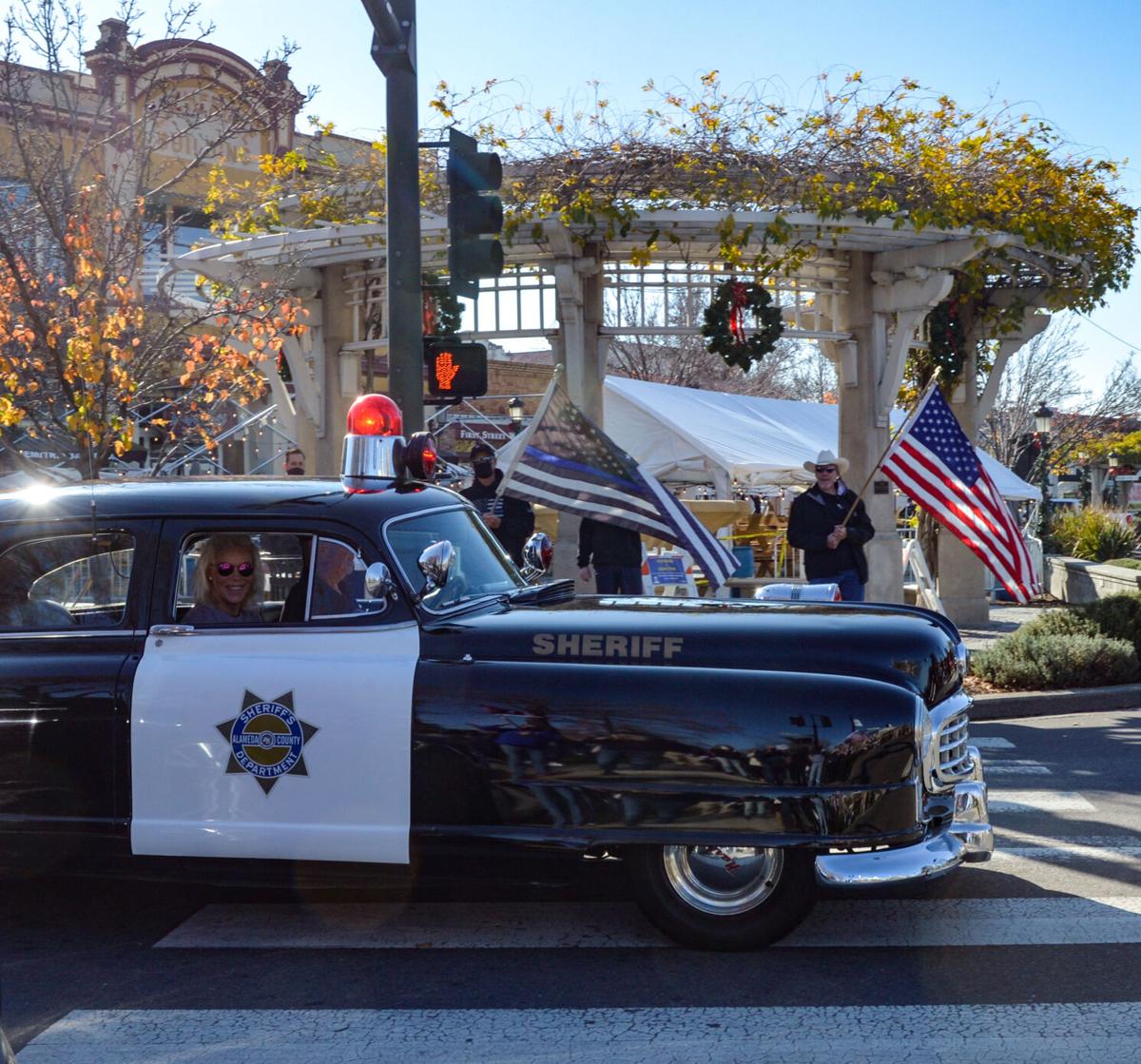 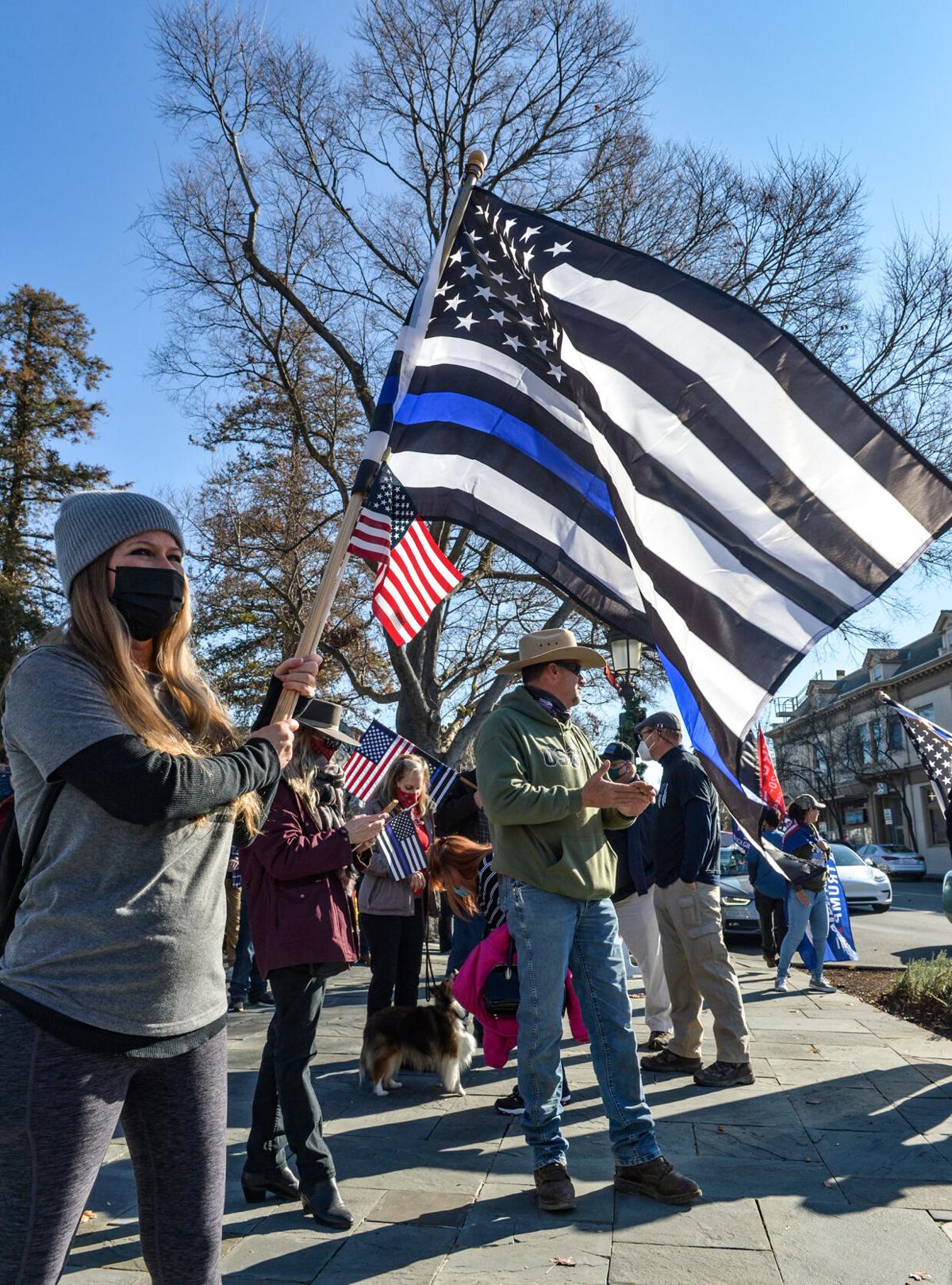 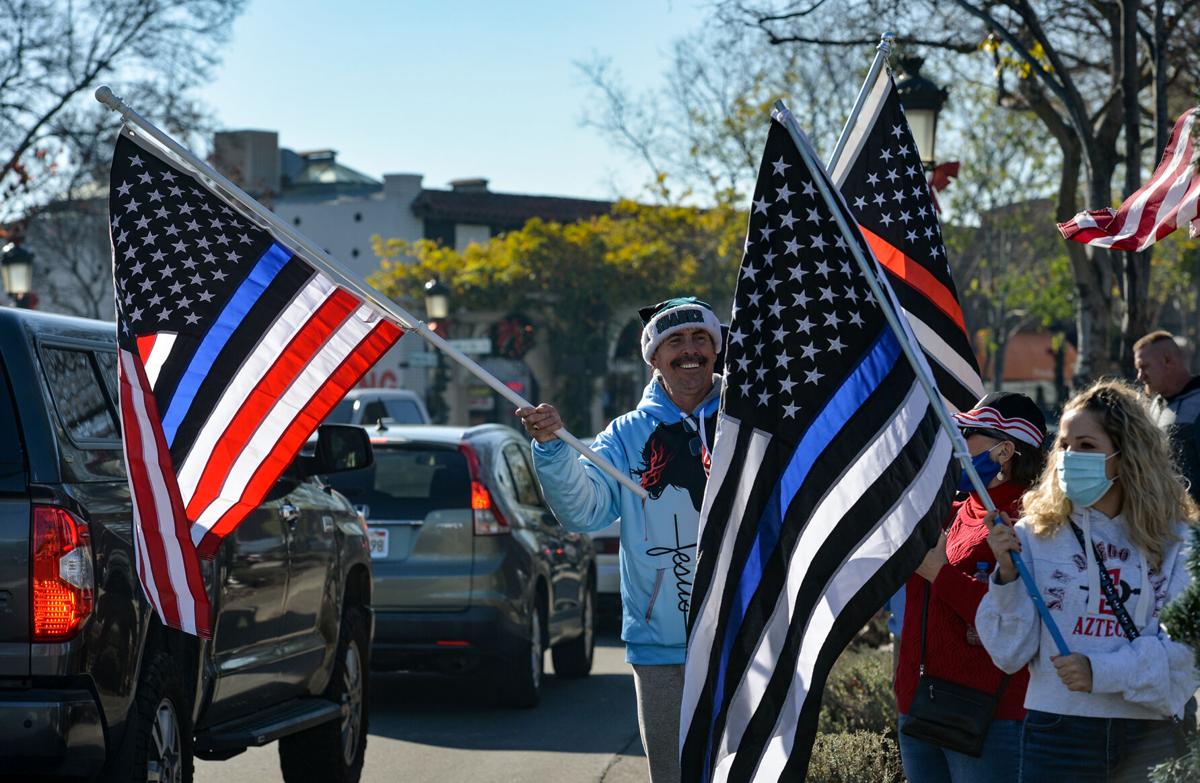 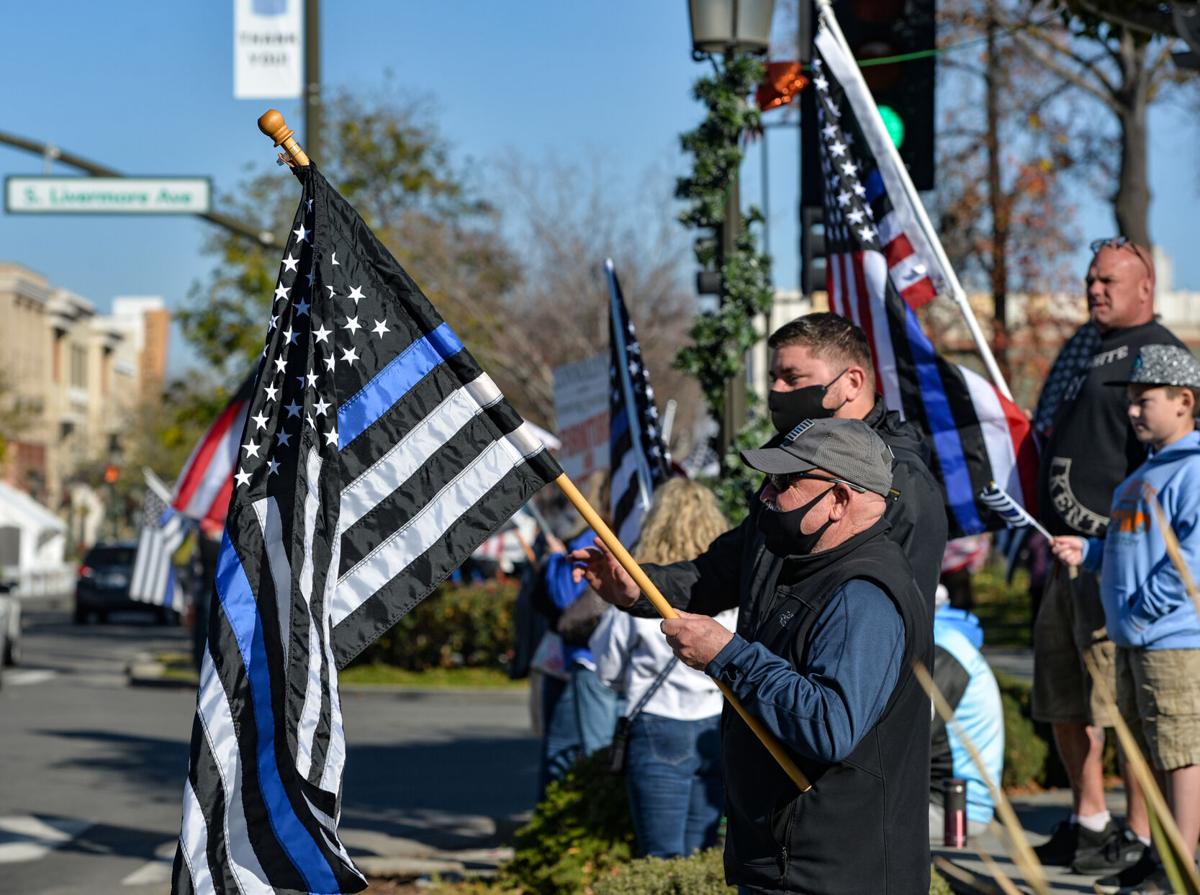 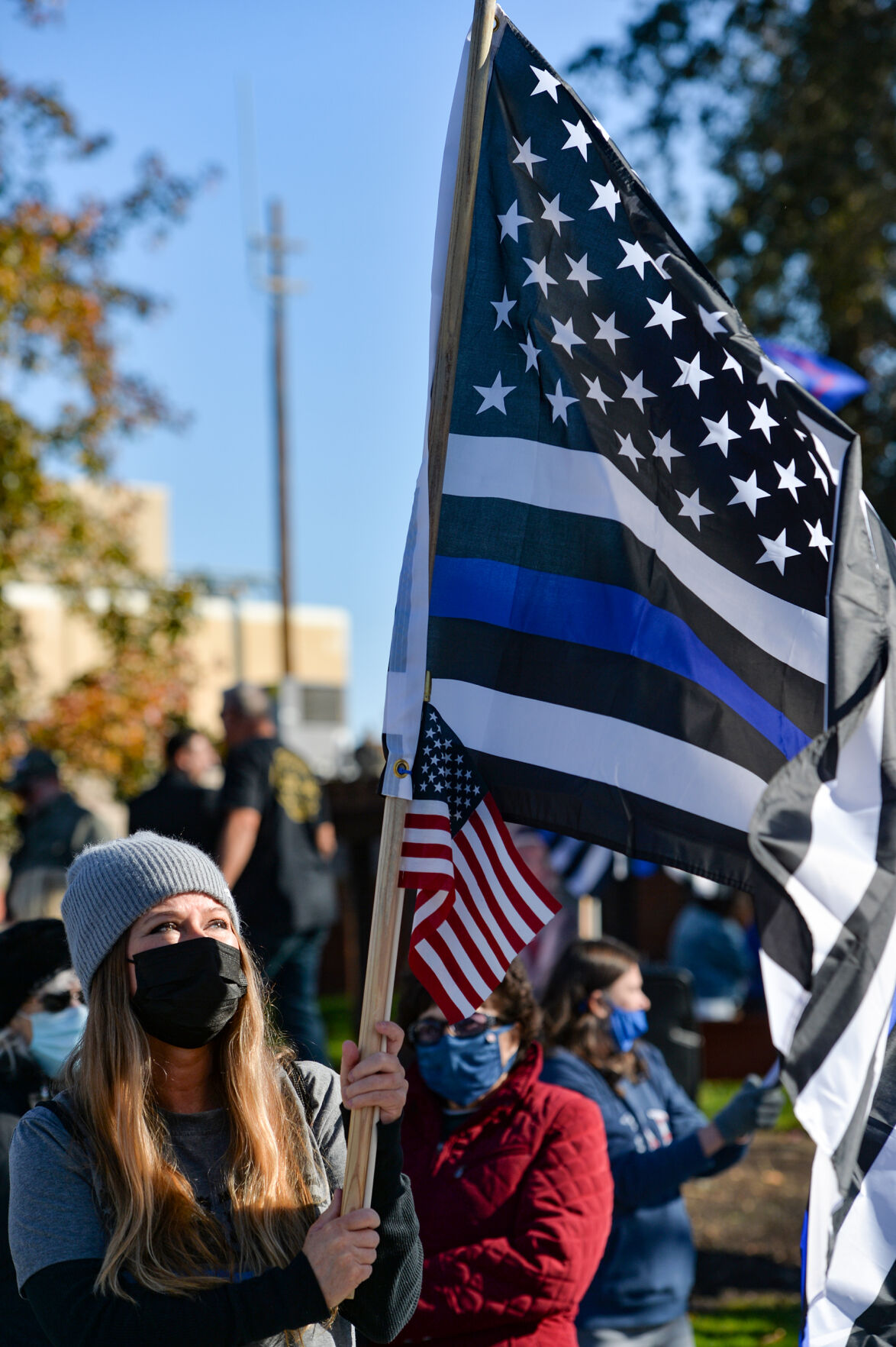 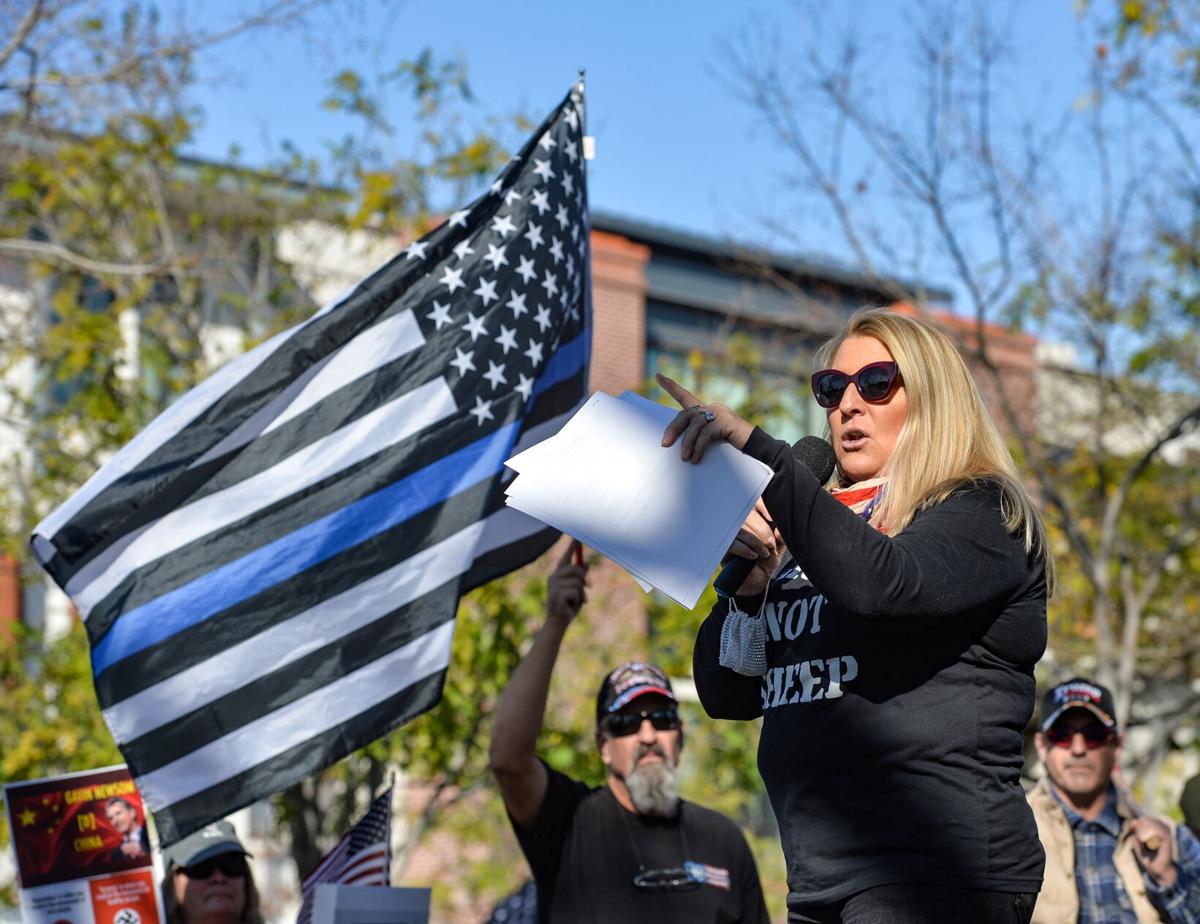 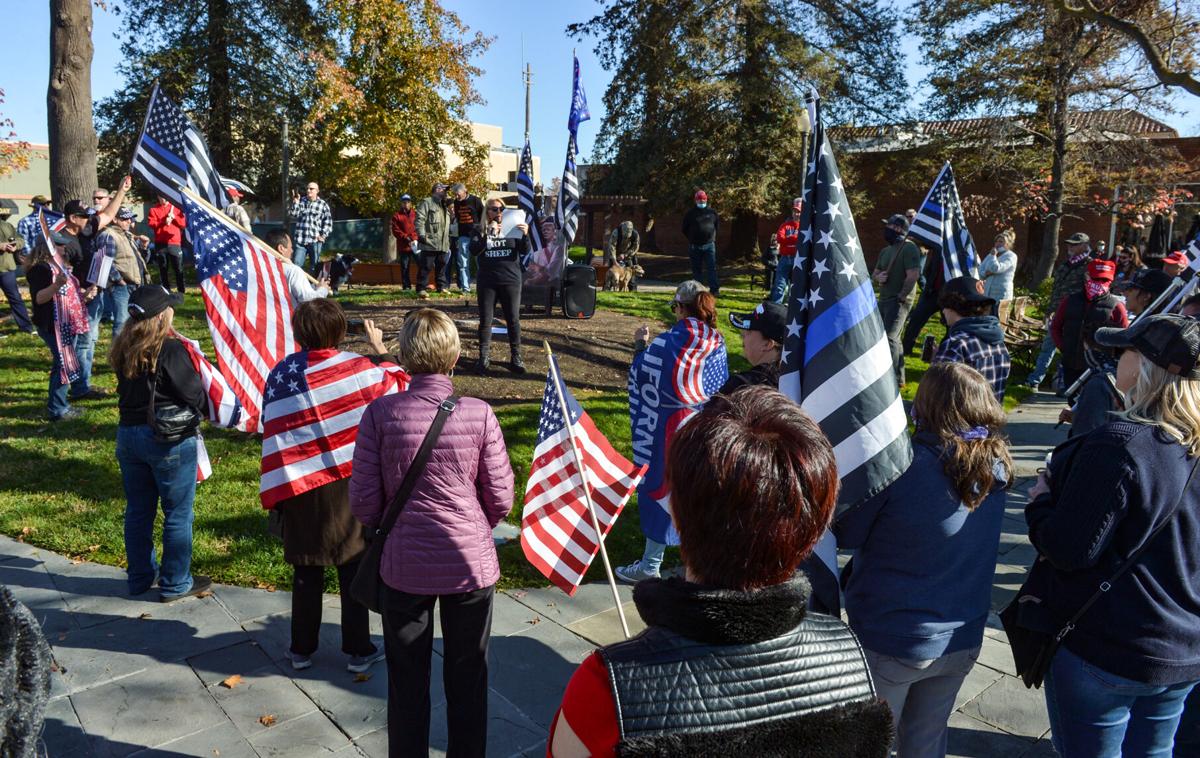 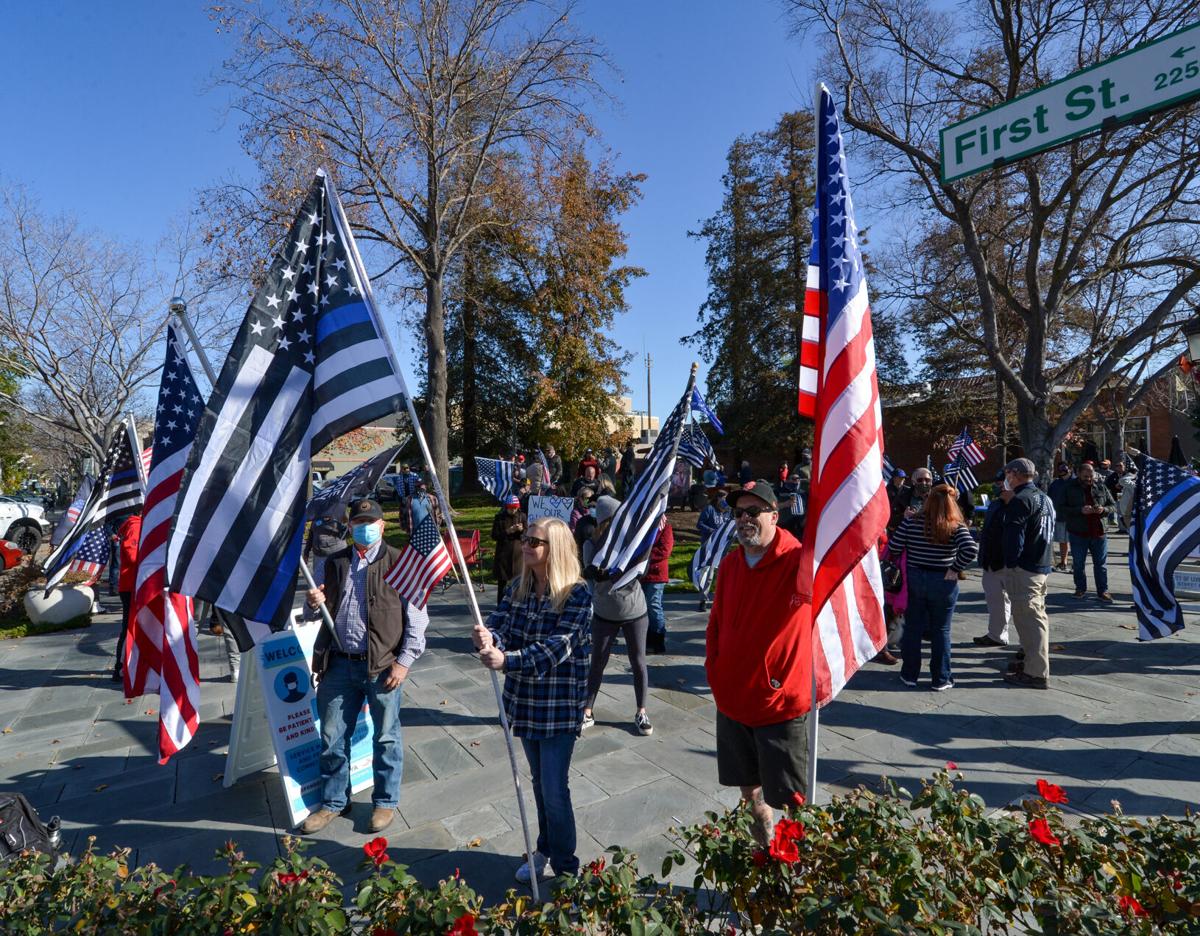 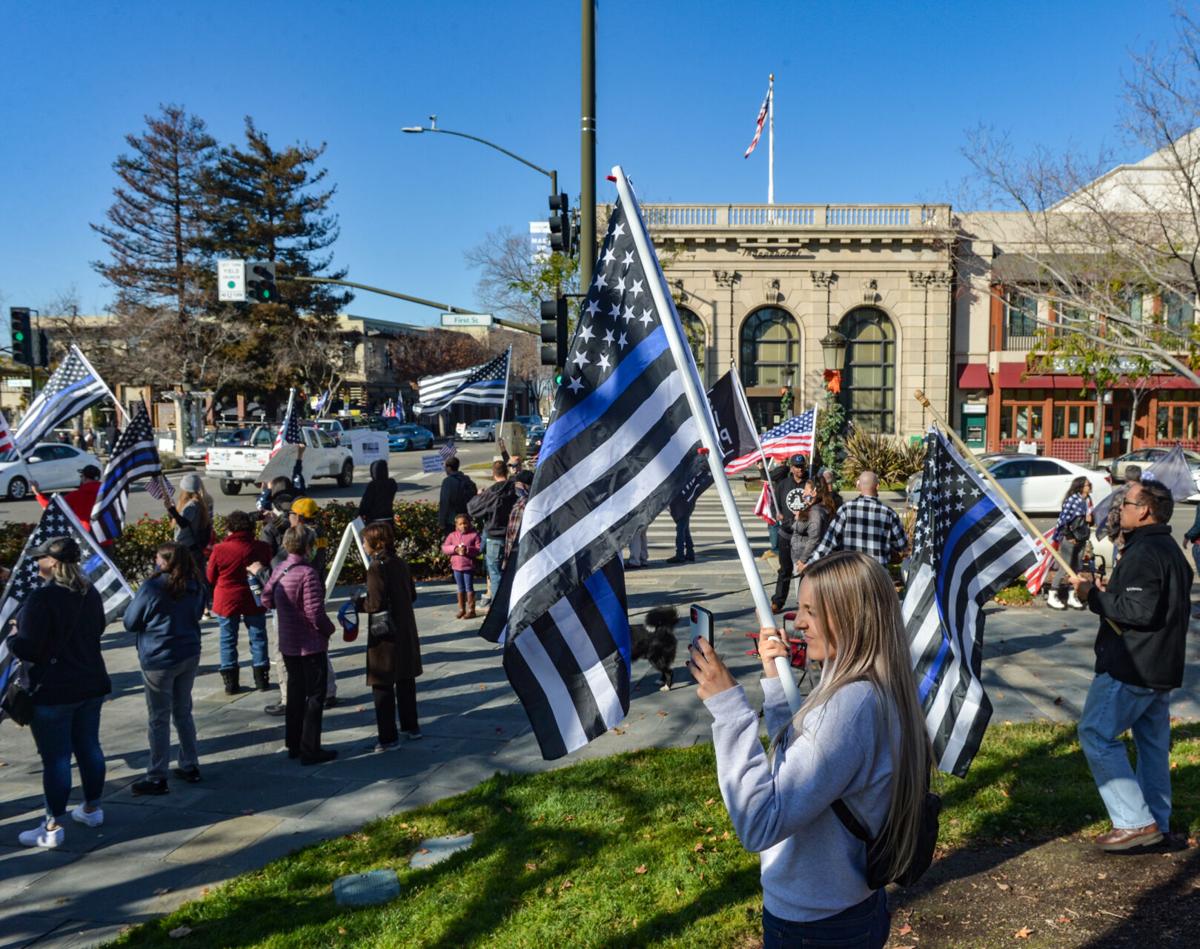 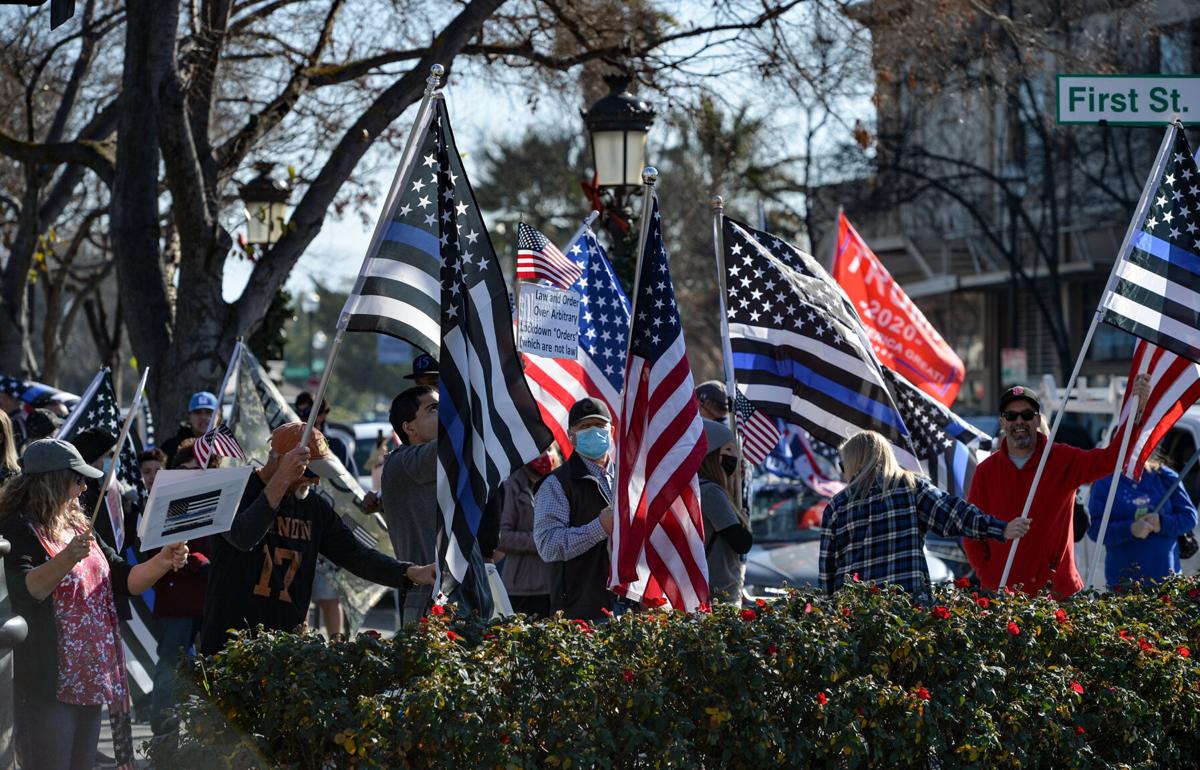 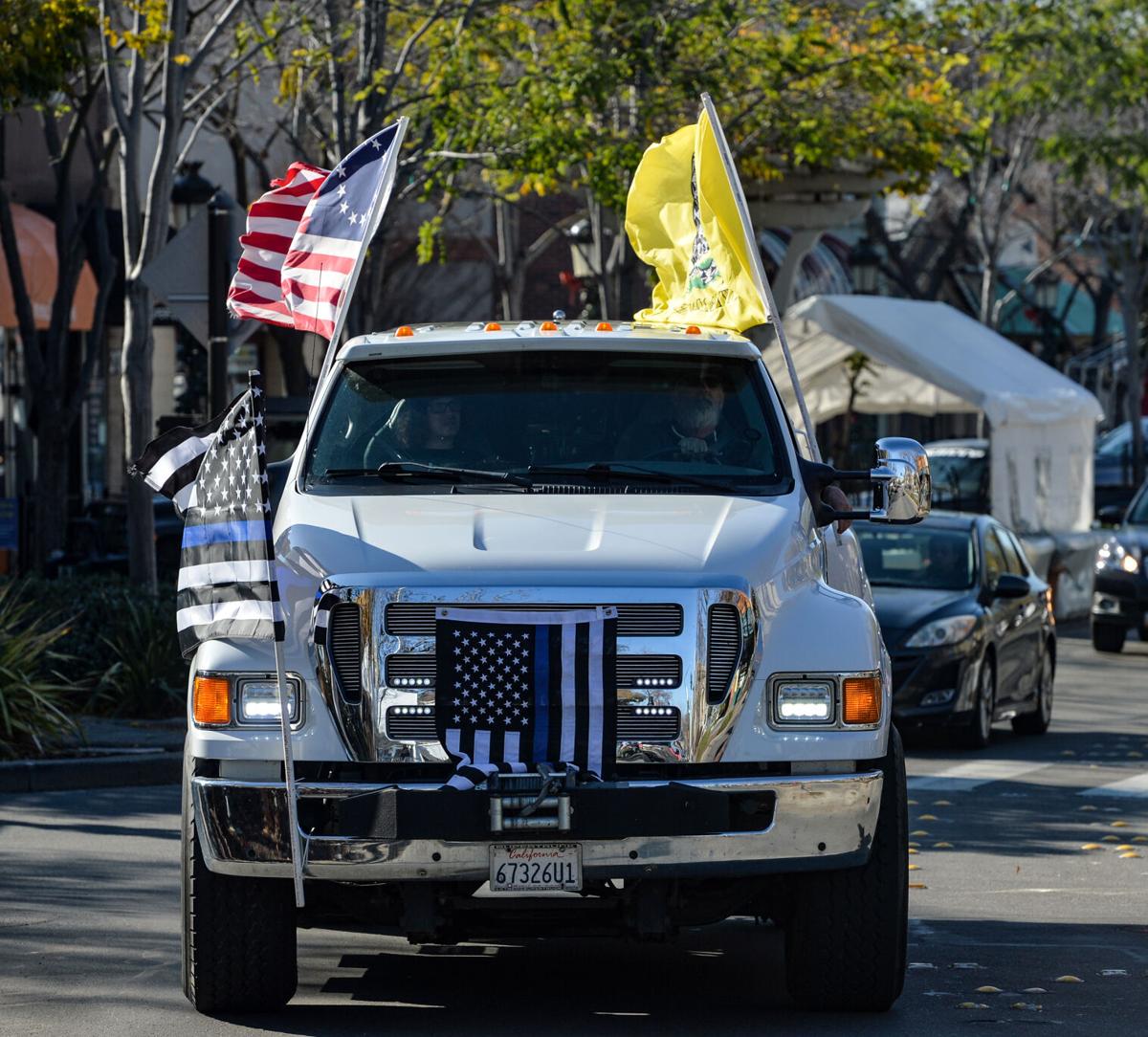 A group of protesters with a bullhorn converged outside the homes of Livermore Mayor Bob Woerner and Councilmember Trish Munro Saturday in a display of outrage over a perceived threat to privacy and free expression.

At issue was the thin blue line flag — an American flag with a blue stripe intended to honor police officers — that the protesters believed city leaders were targeting as a symbol of hate.

Protestors at the Dec. 20 rally also worried about tax dollars funding a digital dossier created to locate, inventory and identify those who display the flag on private land.

The problem is, none of this was true.

“Recently, meeting notes posted on the city’s website were extrapolated into some extreme interpretations. That, in turn, led to considerable further social media commentary that continues to swirl,” Woerner wrote in a Dec. 17 letter to the community. (http://bit.ly/Indy_WoernerLetter)

The tumult started with an online Dec. 12 editorial on the “Law Enforcement Today” police website that seized upon language contained in the city's Equity and Inclusion Subcommittee meeting minutes. The October brainstorming session featured a city-facilitated community conversation on equity and inclusion. While the subcommittee’s notes did not call the flag a racist symbol, protesters who rallied this week surmised that they had.

The thin blue line flag is essentially a black and white American flag with a single blue stripe. Described by its creator as a tribute to fallen police officers, it has also come under scrutiny as a symbol of division. It was flown by white nationalists alongside Confederate flags at the 2017 United The Right rally in Charlottesville, Virginia, and has been a subject of intense debate across the country.

The write-up sparked what organizers called Back the Blue rallies at Lizzie Fountain, where demonstrators, including Alameda County Sheriff Gregory Ahern, gathered to draw attention to their concerns. “The thin blue line actually stands for the line between justice and injustice and evil and righteousness," Sheriff Ahern told a KTVU news crew at one of the downtown Livermore demonstrations. “So we support the thin blue line and we do that every day in our job.”

The Livermore Police Officers Association weighed in on the issue with a post on social media dispelling the notion that the symbol is racist; the association thanked members of the public who flocked to its members’ defense.

It also brought loud demonstrations to the homes of elected city officials. A video, which briefly circulated on Facebook, showed one protester outside Munro’s home.

Woerner and Munro wrote a joint letter in response to friction stirred by the “Law Enforcement Today” editorial, saying the notes were taken badly out of context. Woerner and Munro, invited interested parties to participate in the community project. To read the full letter, visit http://bit.ly/Indy_WoernerMunro.

“Unfortunately, symbols can have very different meanings to different groups, can be misunderstood by others, and can trigger anger and division,” the mayor and councilmember stated in a portion of the letter. “For example, some people see the Black Lives Matter sign as a way of reminding others that some groups have been systemically oppressed throughout American history and into the present. Similarly, some people see the Thin Blue Line flag as a way of supporting the people who put their lives on the line to provide public safety. To come together, we need to hear and acknowledge other people's feelings. We need to understand other people's stories.”