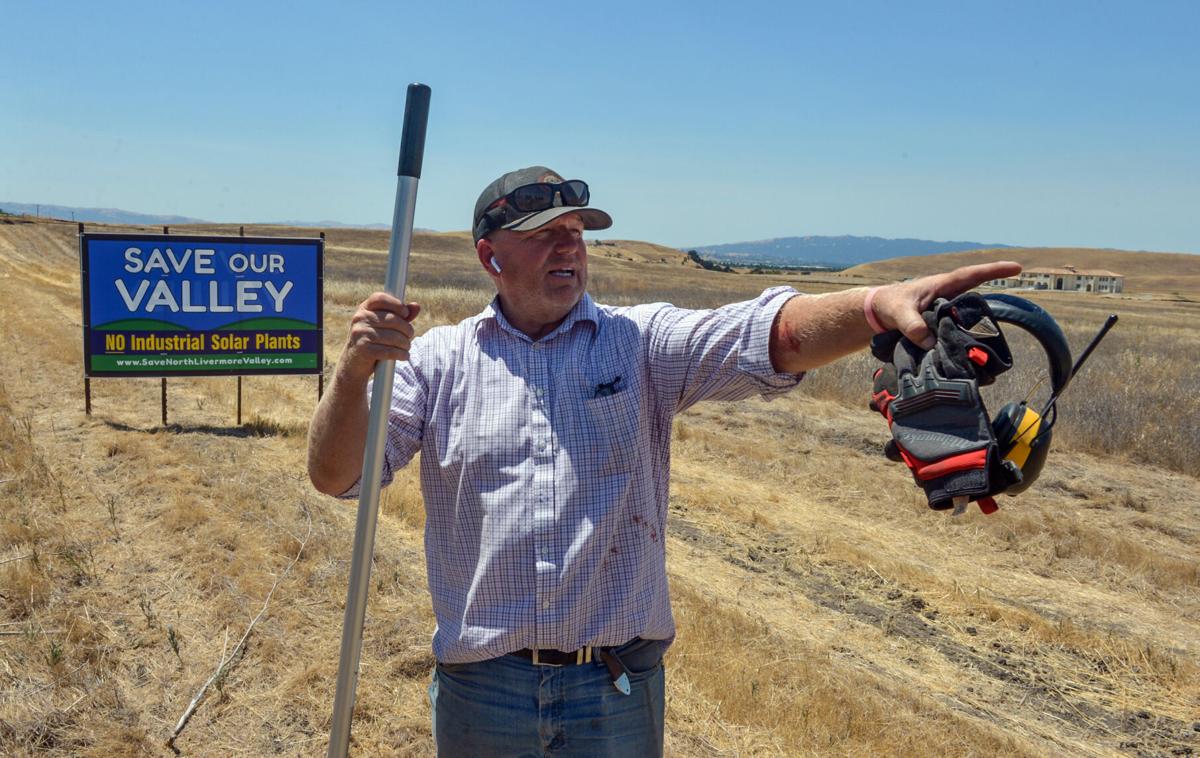 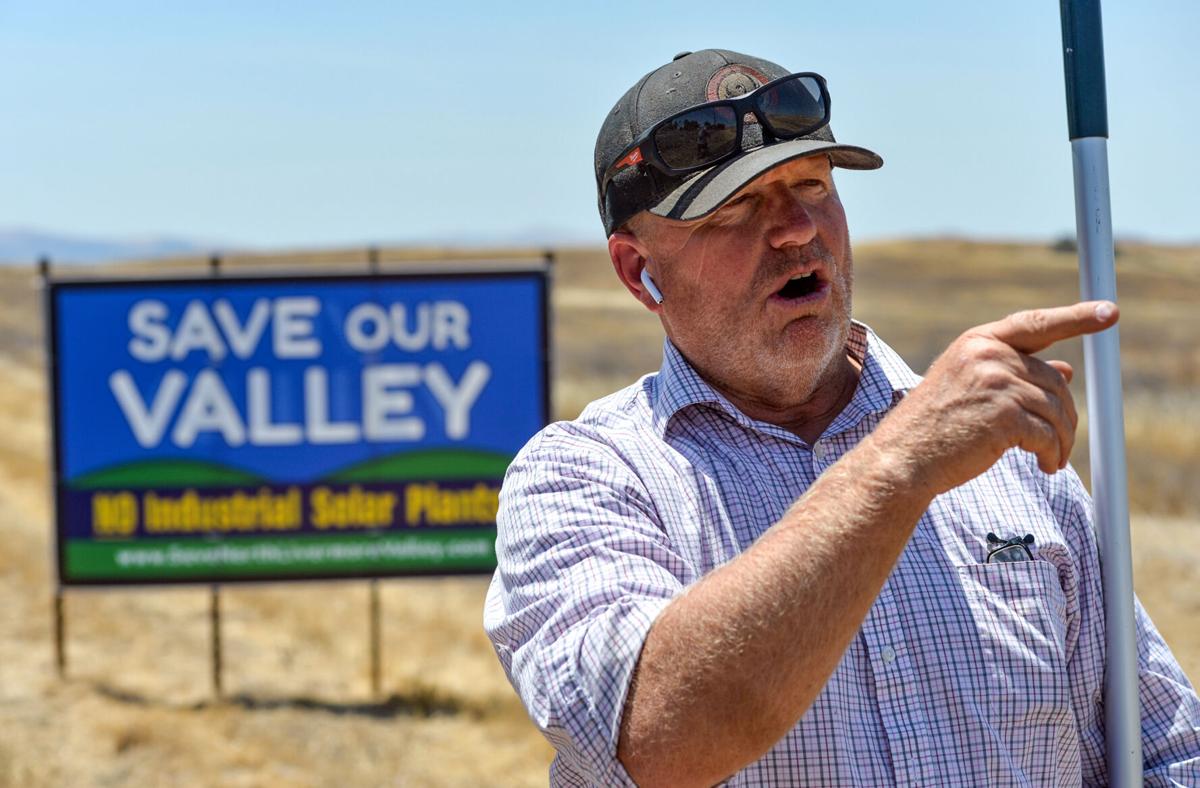 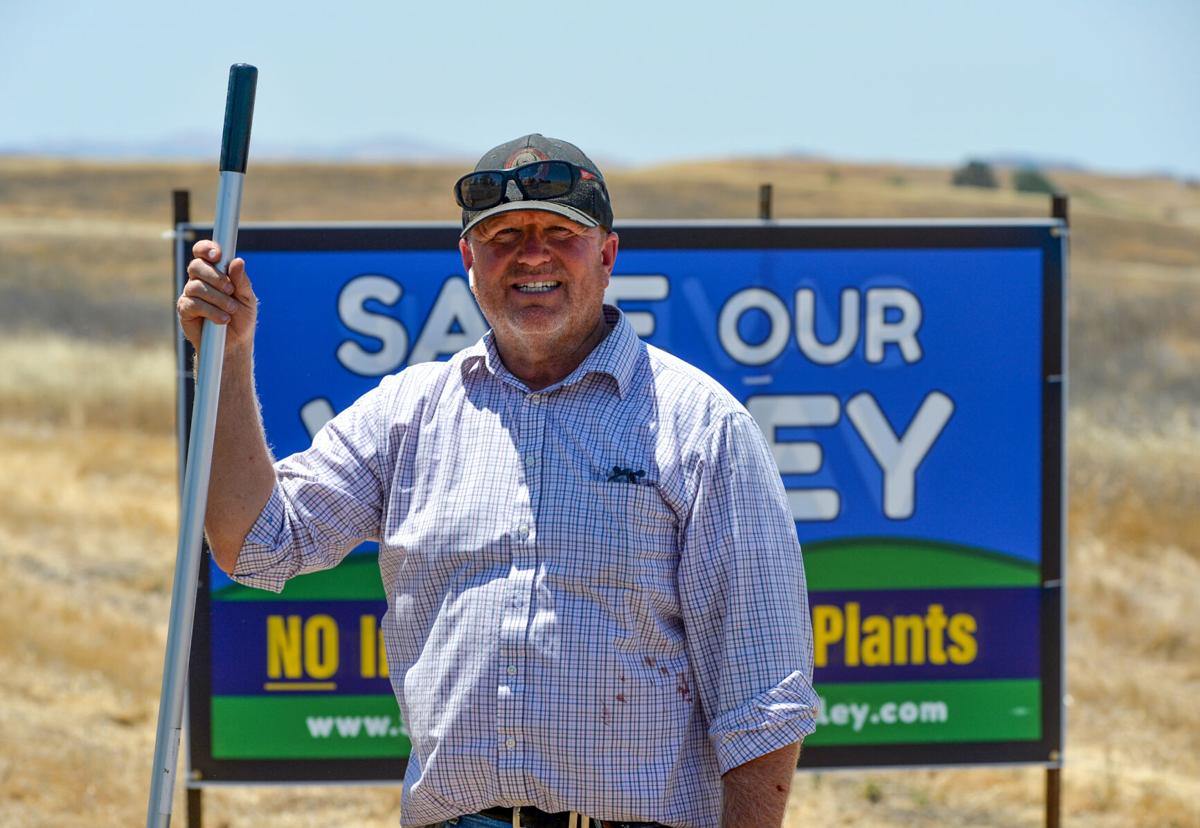 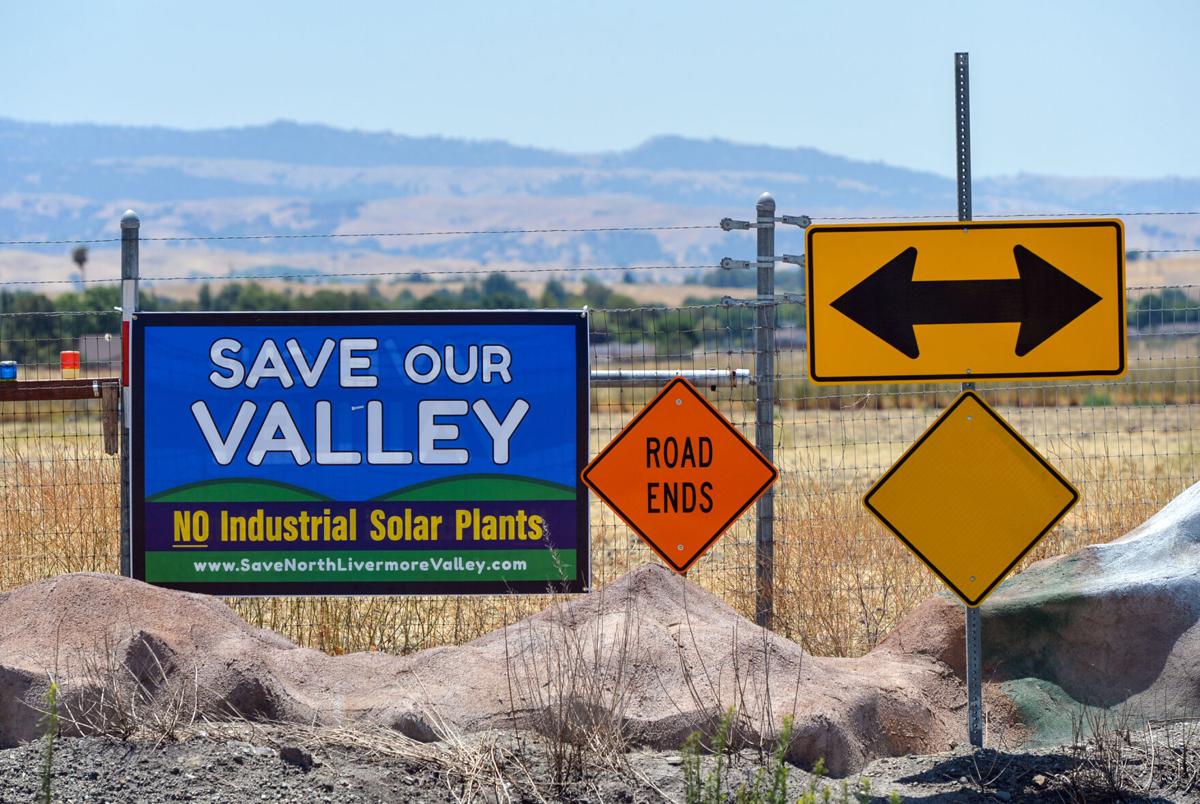 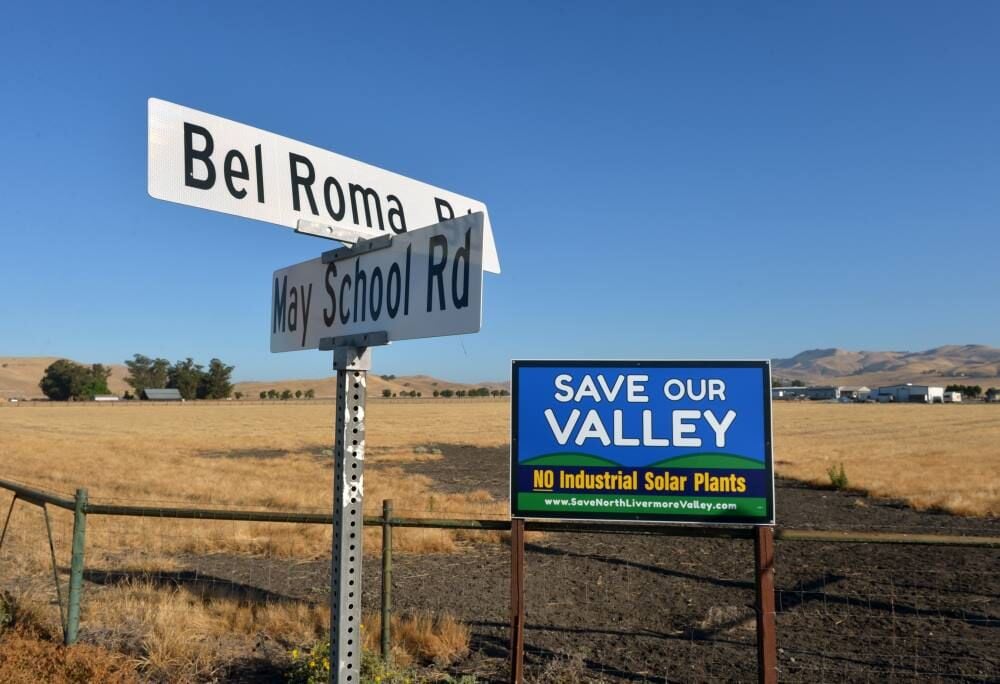 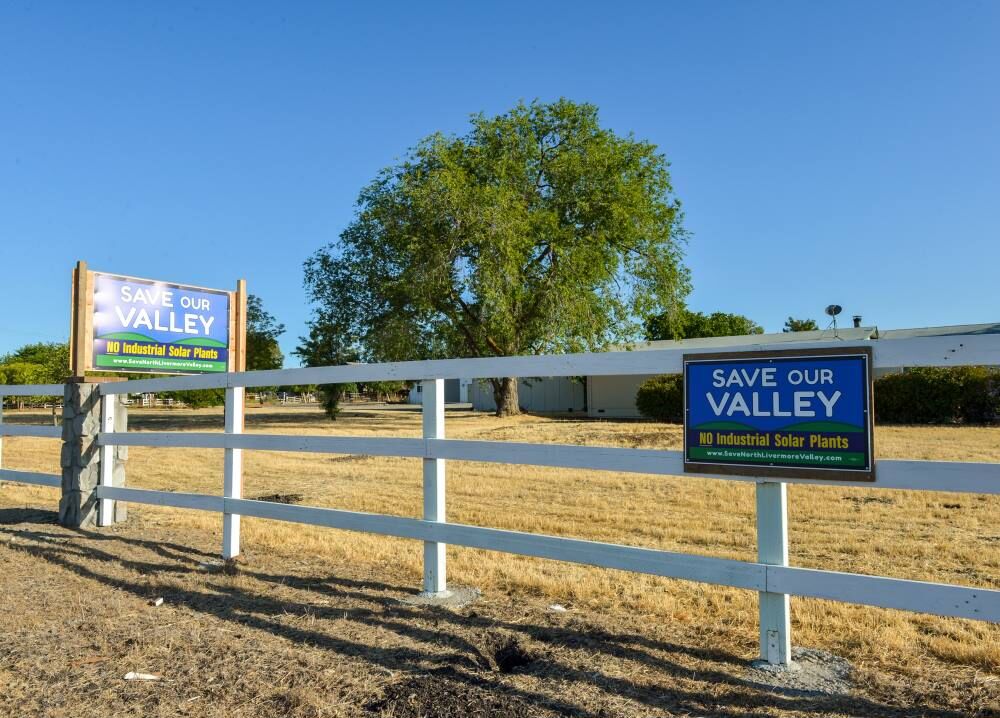 Dozens of property owners seeking to block the development of two large solar power plants planned for agricultural land north of Livermore have formalized their opposition. Calling themselves Save North Livermore, the group launched a website www.savenorthlivermorevalley.com and posted signs along Manning Road and North Livermore Avenue where hundreds of acres of solar arrays will blanket the landscape if the projects were built.

Robert Selna, a land-use attorney representing one of the property owners opposed to the projects, said the discord is a result of Alameda County’s failure to fulfill its promise its amend the general plan with clear rules that govern the allowable location, size and scope for commercial solar power plants.

“As can be seen by this well-organized opposition, the property owners and those wanting to preserve the North Livermore Valley are not going to roll over,” Selna said.

The majority of the two projects are on land designated for large parcel agriculture. The county planning department has taken the position that utility-scale solar energy facilities are permitted uses within that land use designation. Two significantly smaller solar power projects approved in 2008 and 2011 are cited by planning staff as precedent.

The Tri-Valley Conservancy’s appeal of the latter decision in early 2012 to the Board of Supervisors was denied. However, during the hearing, county planning staff confirmed approval would not set a precedent for future projects.

Community Development Agency Director Chris Bazar stated that, during the hearing, the county was about to embark on a comprehensive policy review for solar projects and would apply any new rules to future projects. Discussing the project under appeal, Bazar said the decision to allow the project to move forward before the adoption of new policies was based on its lack of significant impacts.

Selna, the property owner’s lawyer, said this strongly implies no project will go forward until the policy is complete.

While two draft policies were created by the county planning staff in 2013 and 2018, they were ultimately abandoned. Emails sent in June and July seeking an explanation from Alameda County Planning Director Albert Lopez were not returned by press time.

The area where the projects are planned was designated by the county in the 1960s as a scenic corridor. The developers of both projects have offered to soften visual impacts with berms and buffers planted with native grasses and flowers. However, no method has been proposed to protect the area from the visual impact of 8-foot high solar panels.

The proposed solar project sites are located a few miles north of Livermore, along Cayetano Creek on both sides of North Livermore Avenue adjacent to Manning and May School roads.

Both are moving through the planning and review process. A draft environmental impact report is underway for the 750-acre Aramis project and is expected to be released in the fall. The final 72-acre Livermore Community Solar Farm is anticipated to be reviewed by the East County Board of Zoning Adjustments later this summer. The three-member panel has the power to approve or reject the projects. The Board of Zoning Adjustment’s decision can then be appealed to the Board of Supervisors.

The area has been used for dryland farming and ranching since the earliest days of California. It is part of a larger swath of nearly 4,500 acres long sought by a shuffling deck of land developers with plans for urban housing and commercial developments.

In 1984, the Alameda County Board of Supervisors tentatively approved the Las Positas Planned Development, a residential, office, industrial and commercial “new town” stretching north from Livermore to the Contra Costa County line. At build out, it would have provided housing for 45,000 people in about 18,000 homes and apartments. Land-use maps from the time show the specific properties where the solar power facilities are now proposed slated for high and medium residential development and a village center. County supervisors ultimately put the final decision on the ballot that November; it was rejected by voters.

It was not the first proposed urban development project for the area, nor the last.

The Sierra Club, anti-sprawl groups, and others have zealously guarded the land since the mid-1970s, managing a series of victories in court and at the ballot box to defeat development plans, and decisions by Alameda County and the Board of Supervisors.

Today, development of the parcels where the two disputed solar projects are planned is strictly limited under Measure D, the county open space initiative approved by voters in 2000. Substantive changes to the development caps imposed by Measure D require voter approval.

Richard Stanley’s family, which owns Stanley Ranch, has tended to the land north of Livermore since 1859. About 30 acres of Stanley Ranch is included in diagrams of the Aramis project.

From a property rights perspective, Stanley said he believes the area should have been allowed to develop into homes. He said dryland farming is a difficult way to make a living and without being able to build on his land, the value of his land is diminished.

And while he and some of his neighbors do not see eye-to-eye on the proposed solar farms, they share an appreciation for the place they call home.

“The North Livermore area is probably as pristine an area as you will find anywhere,” Stanley said. “The area hasn’t changed much.”