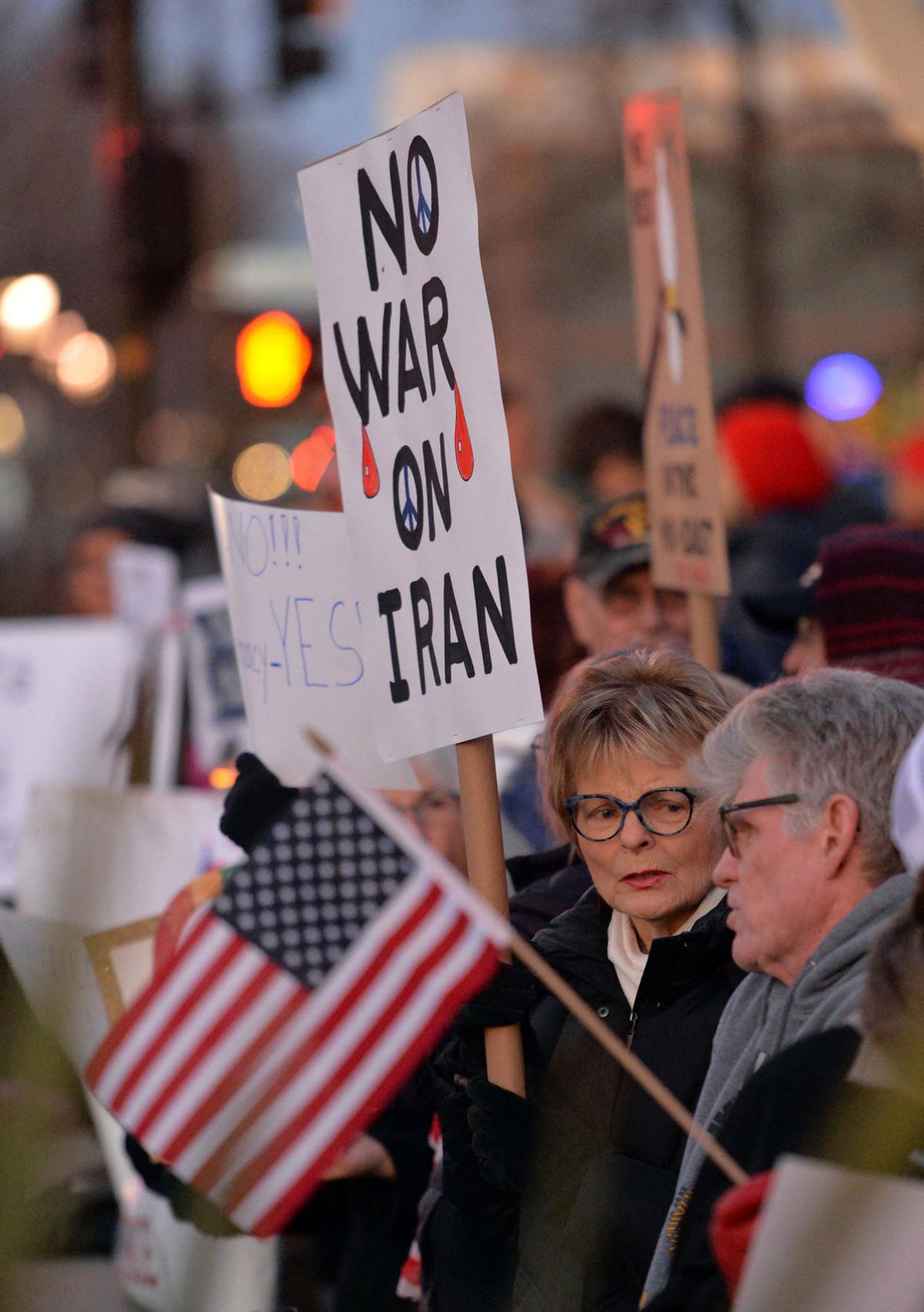 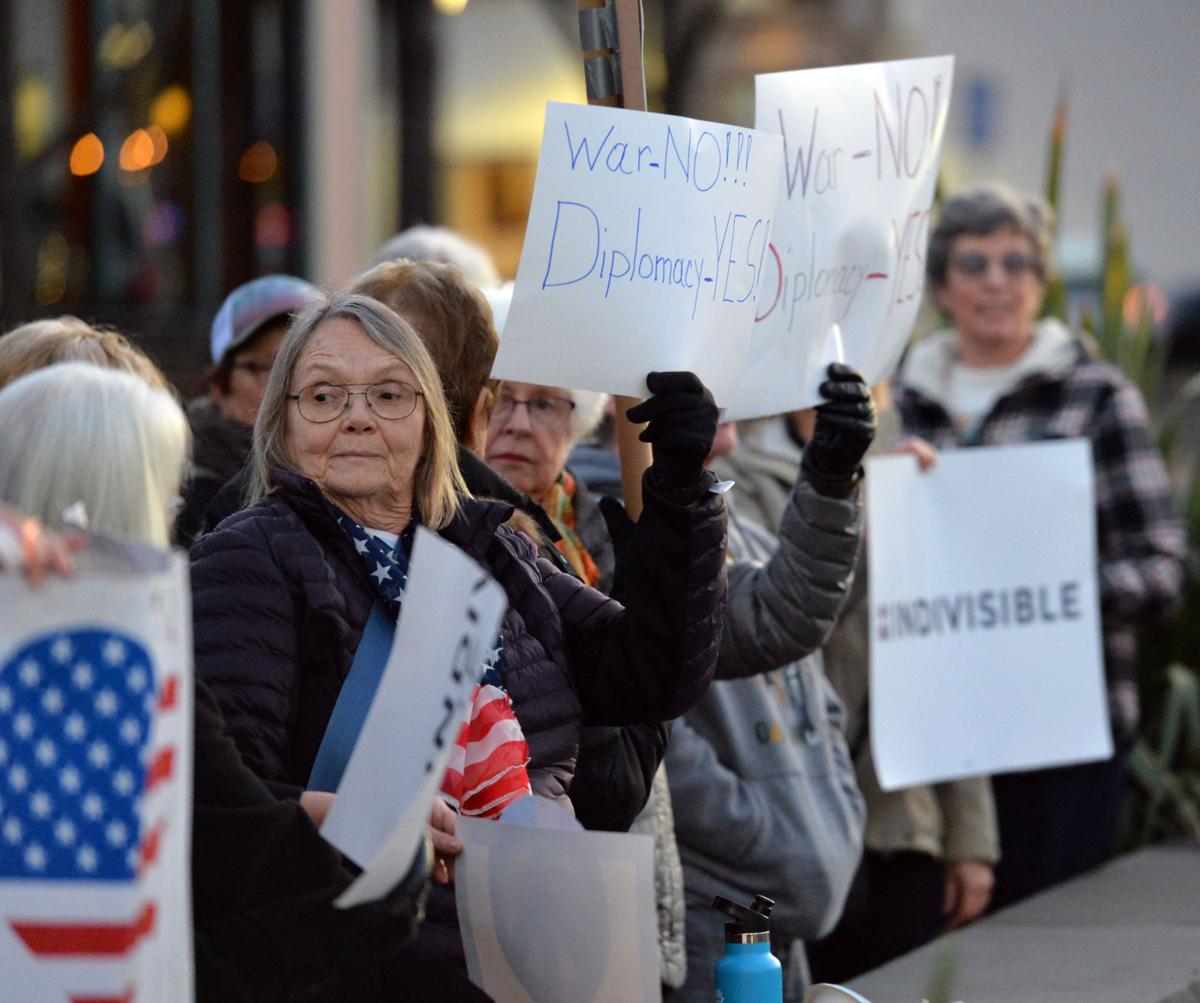 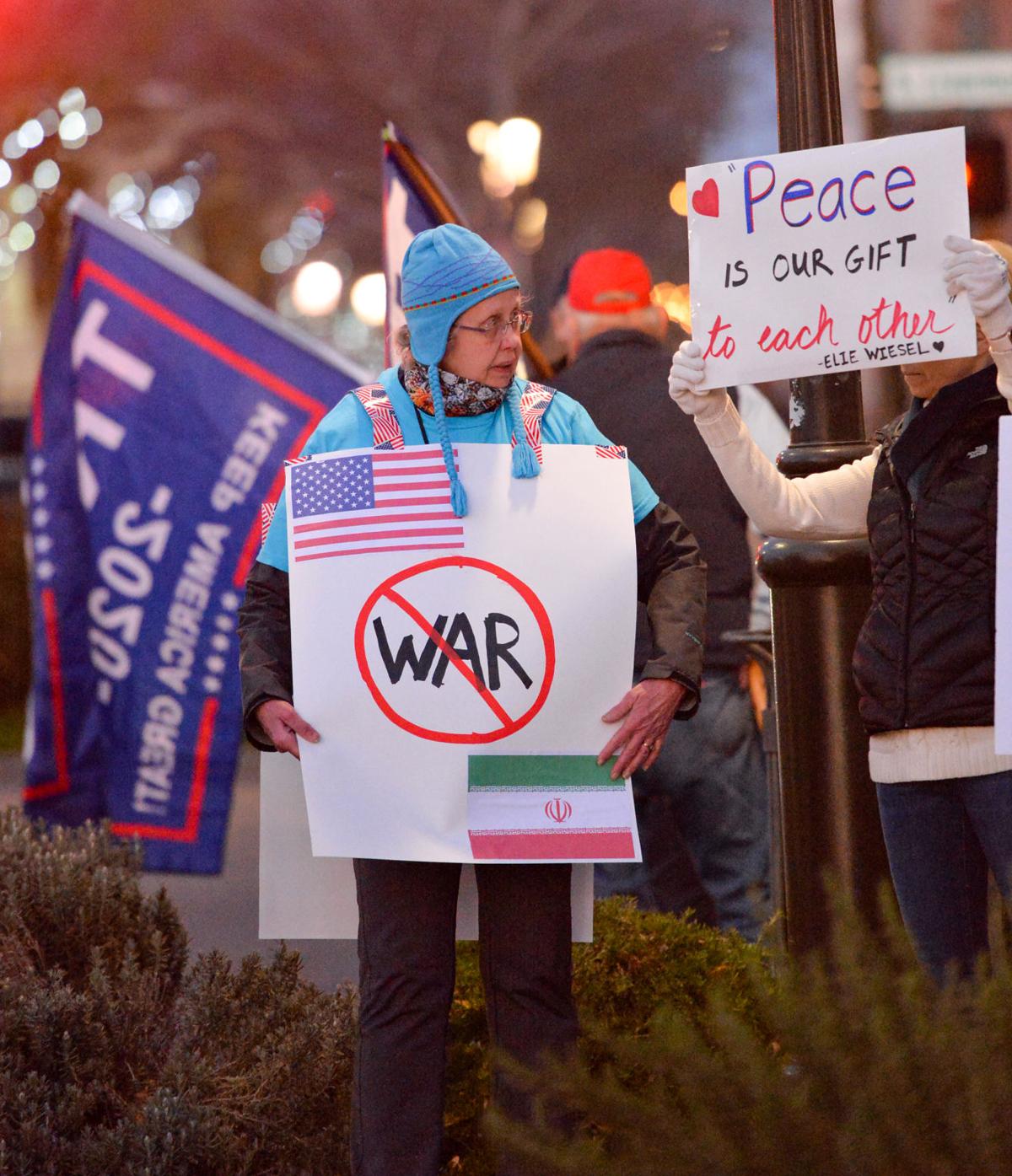 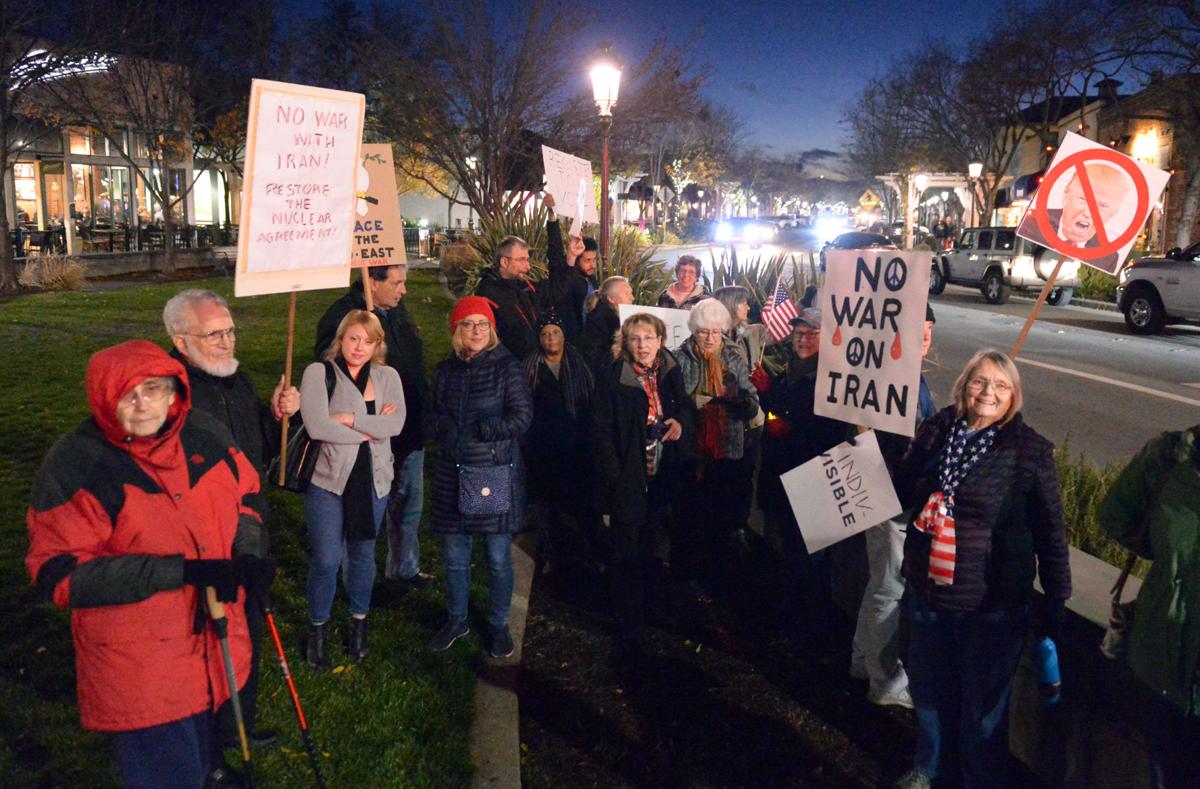 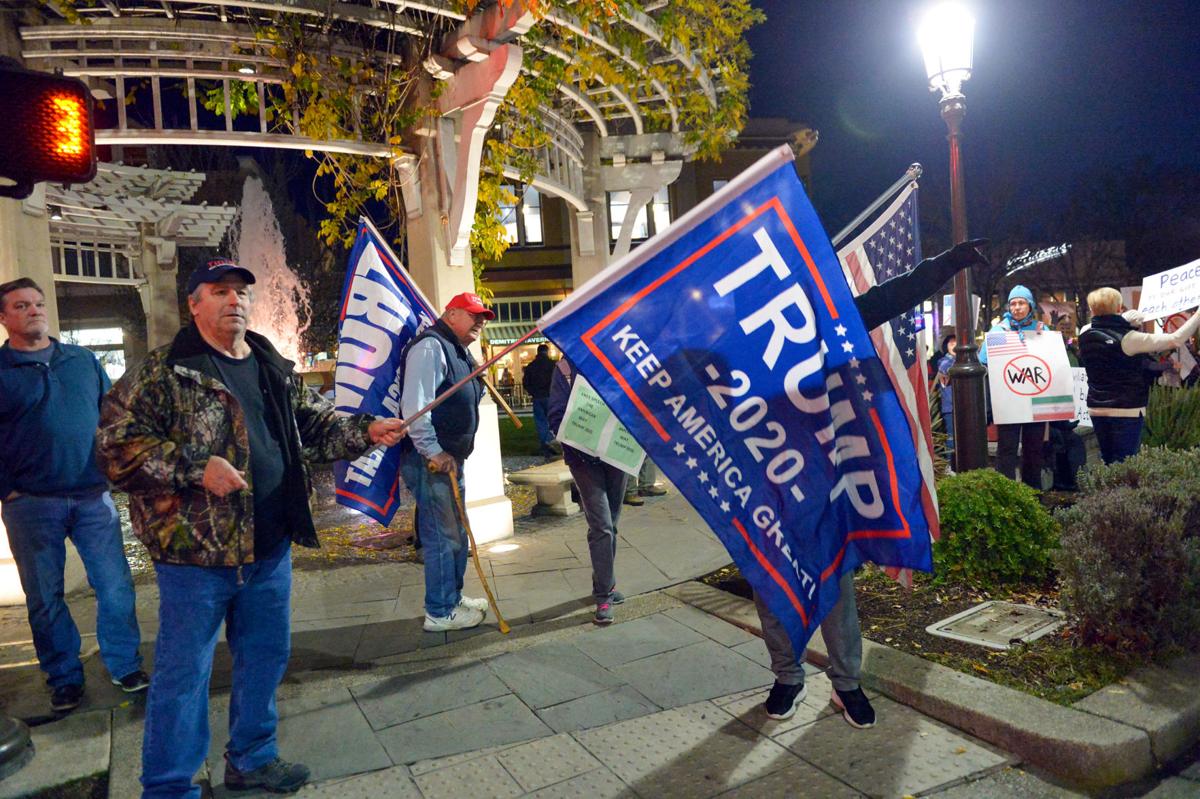 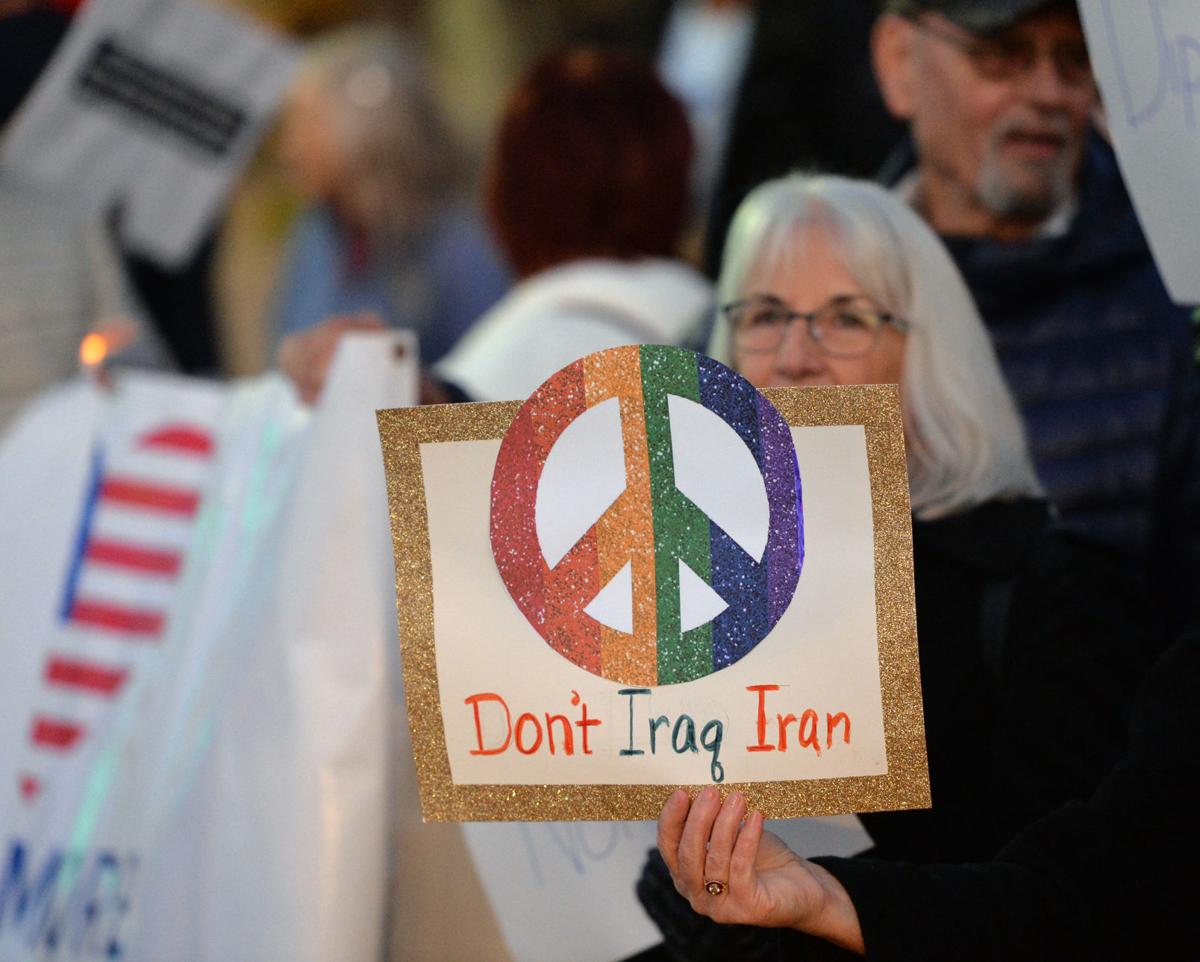 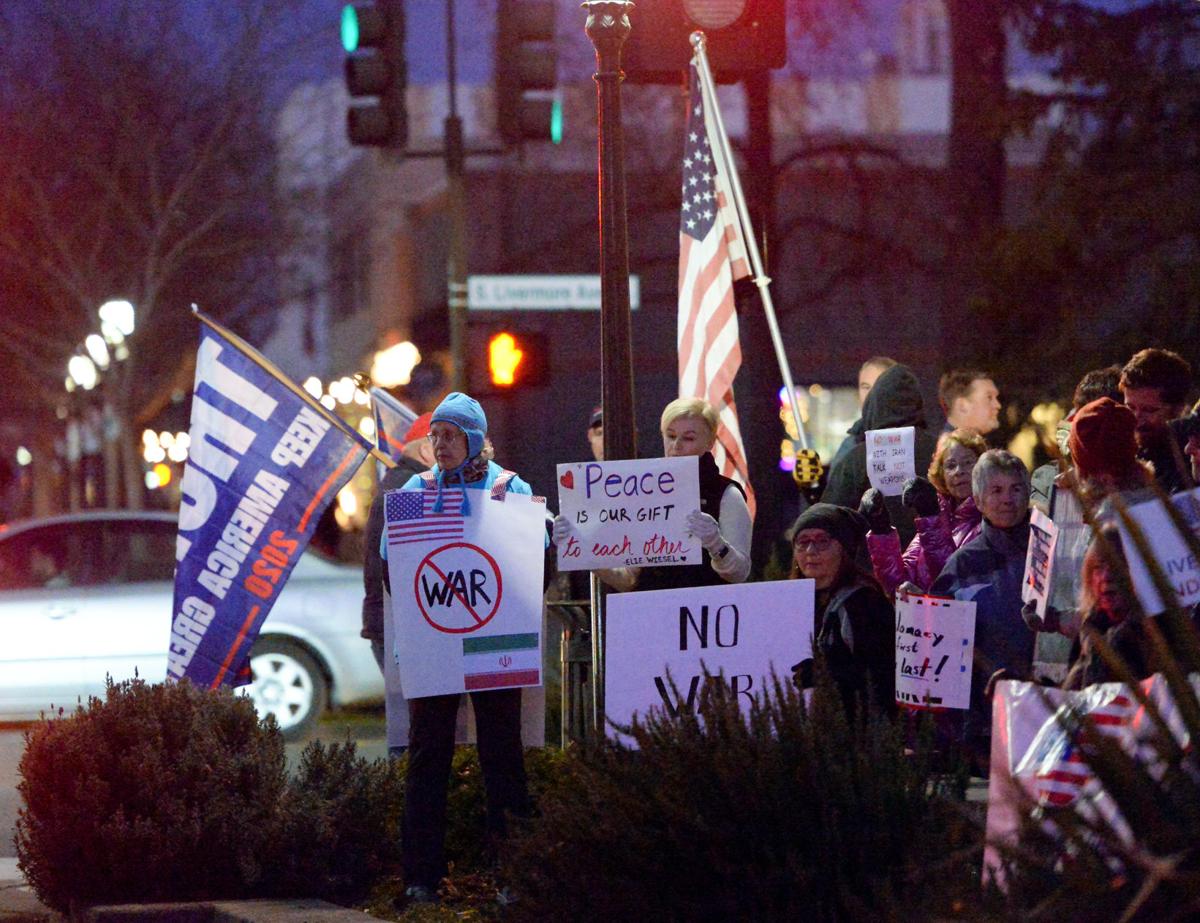 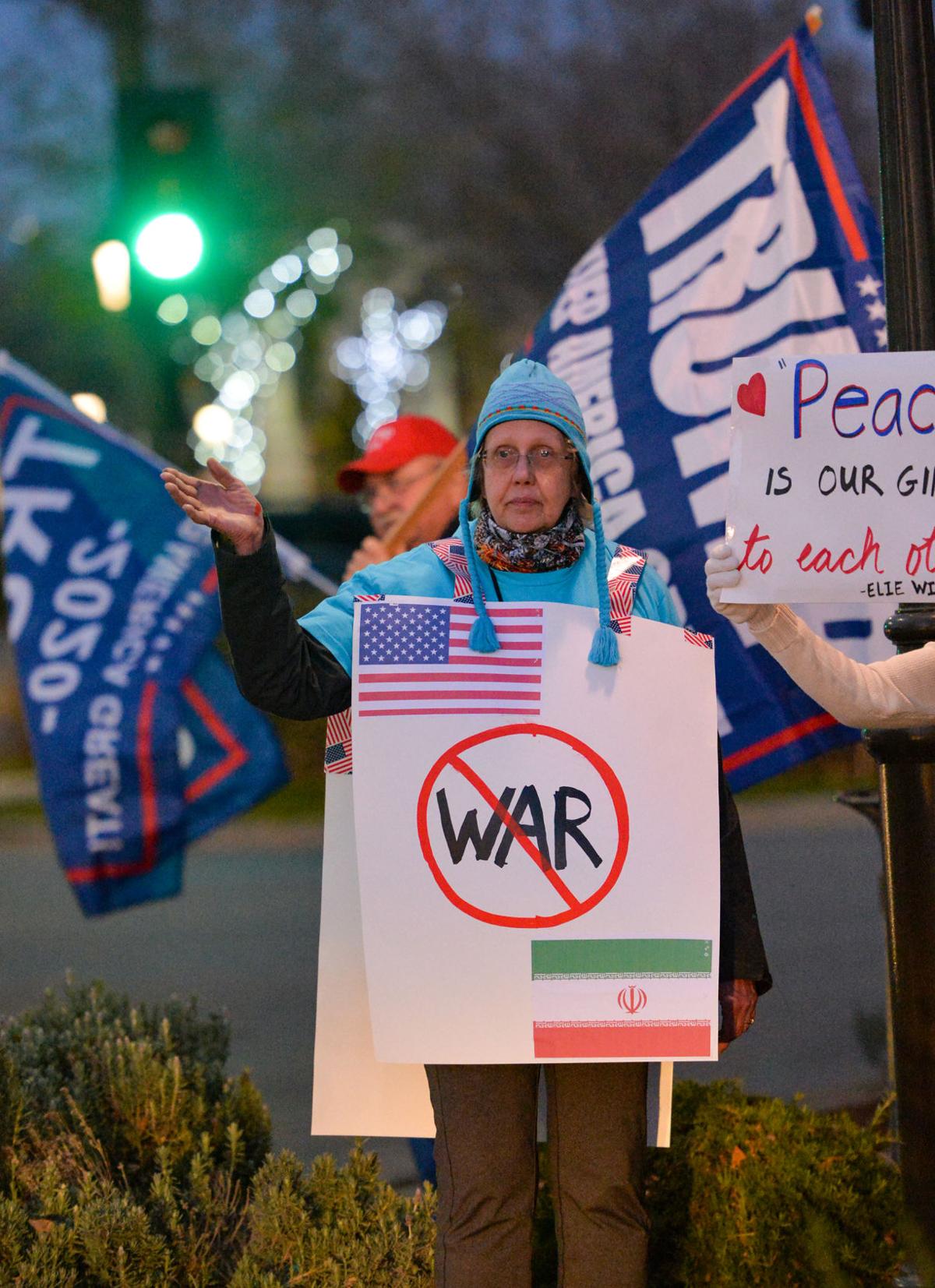 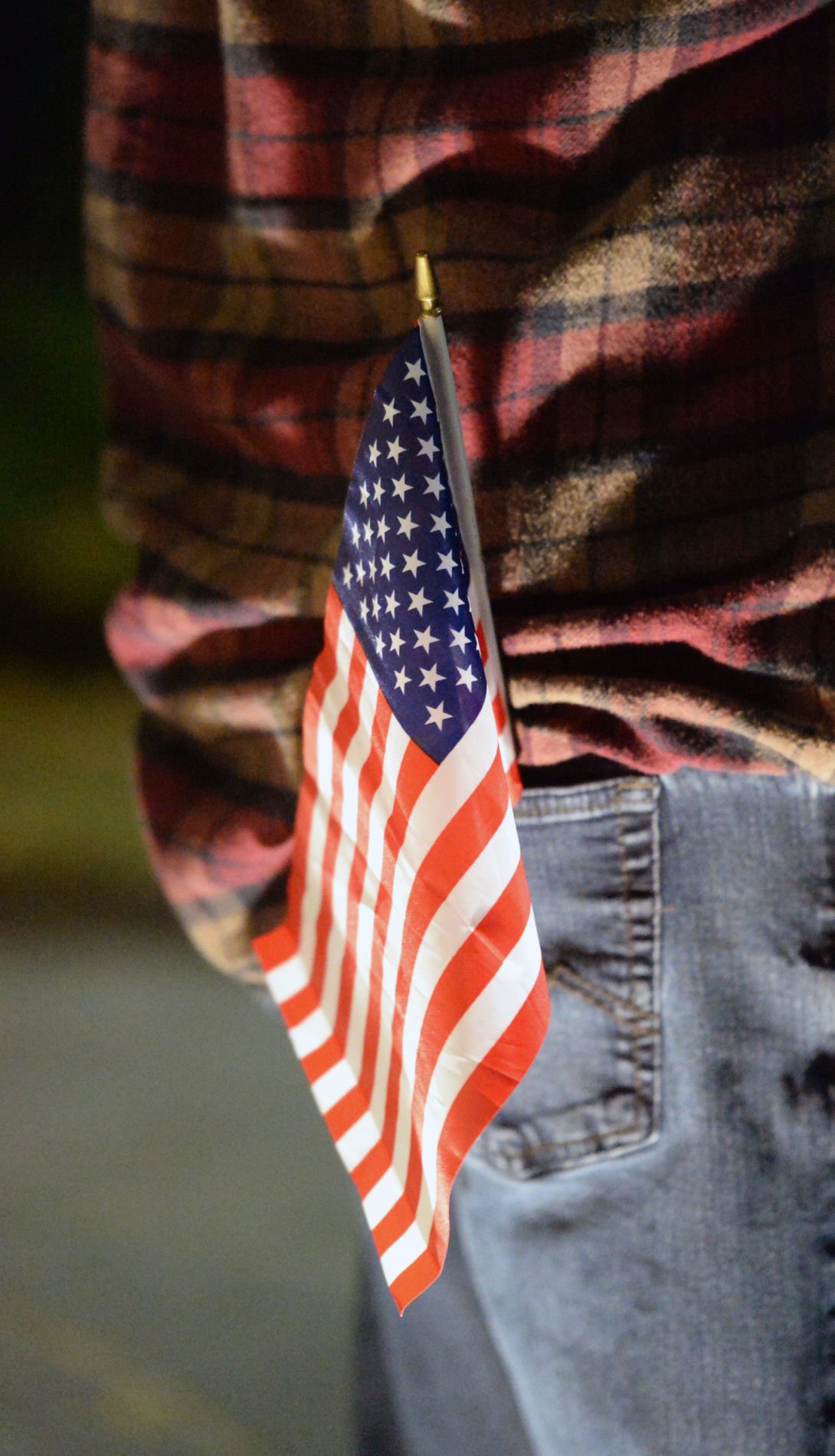 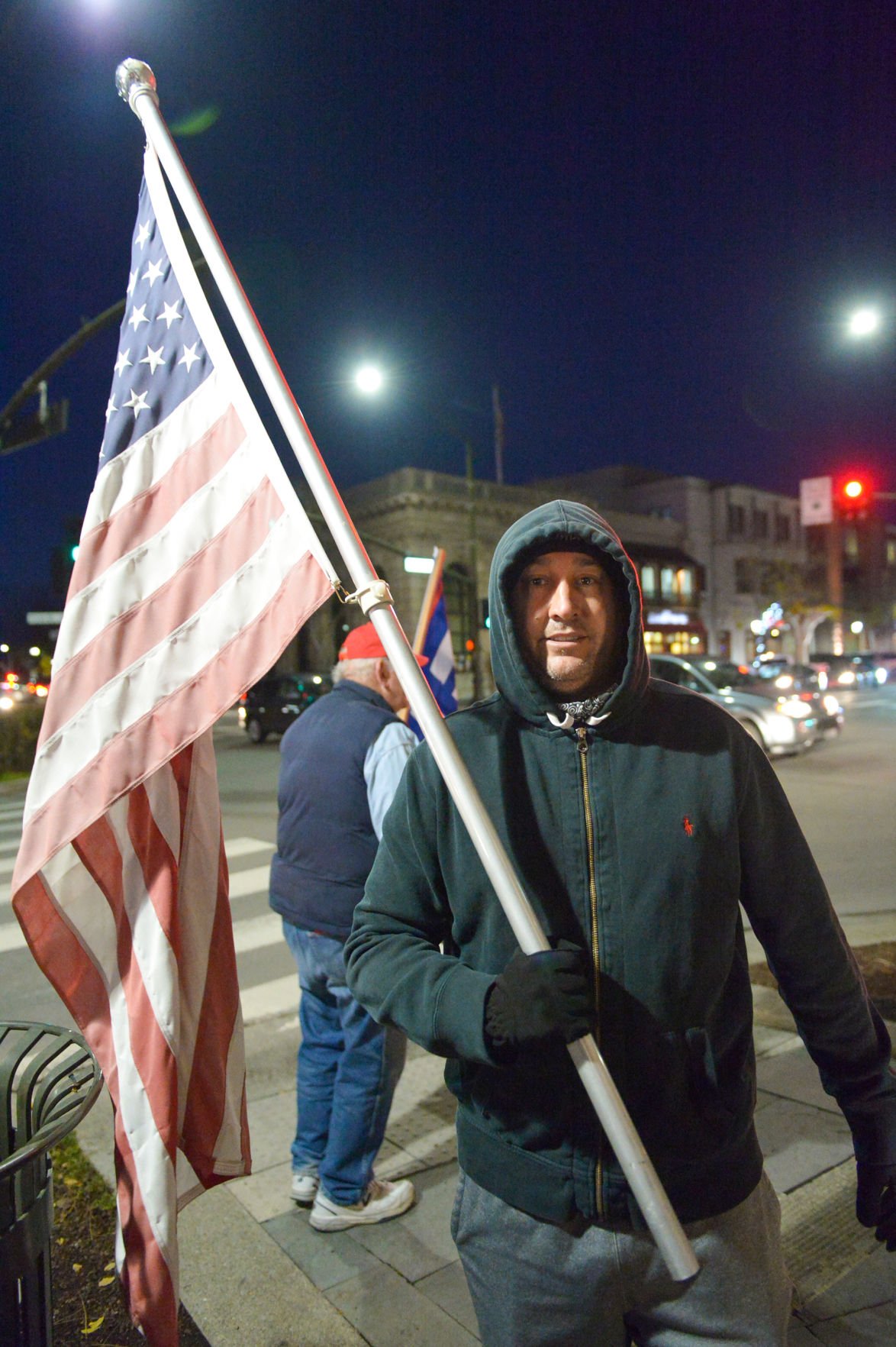 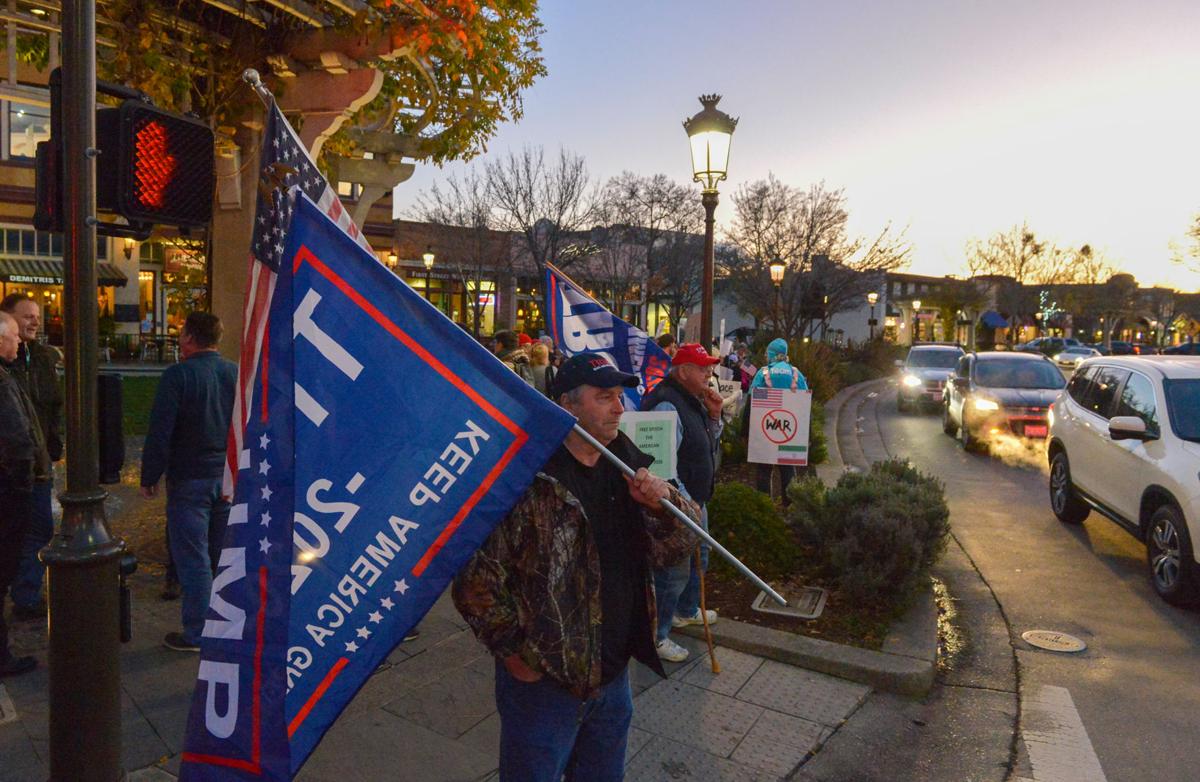 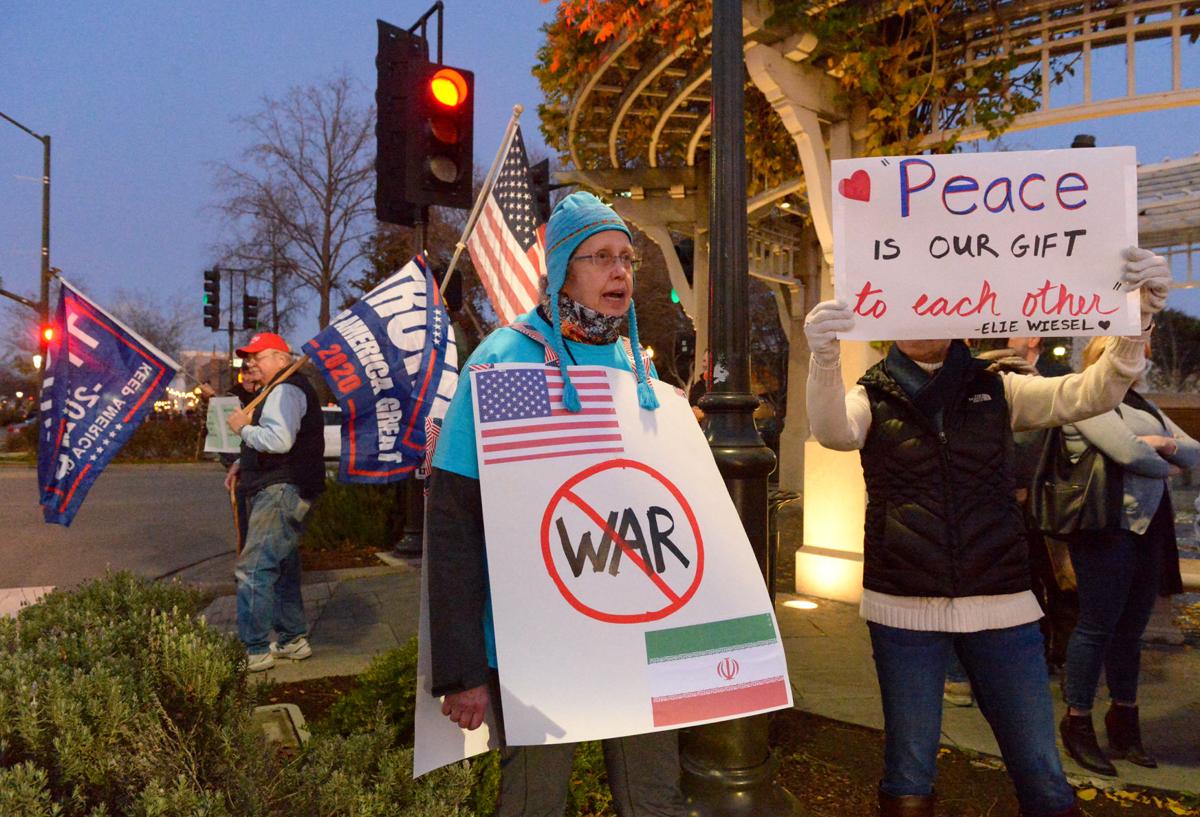 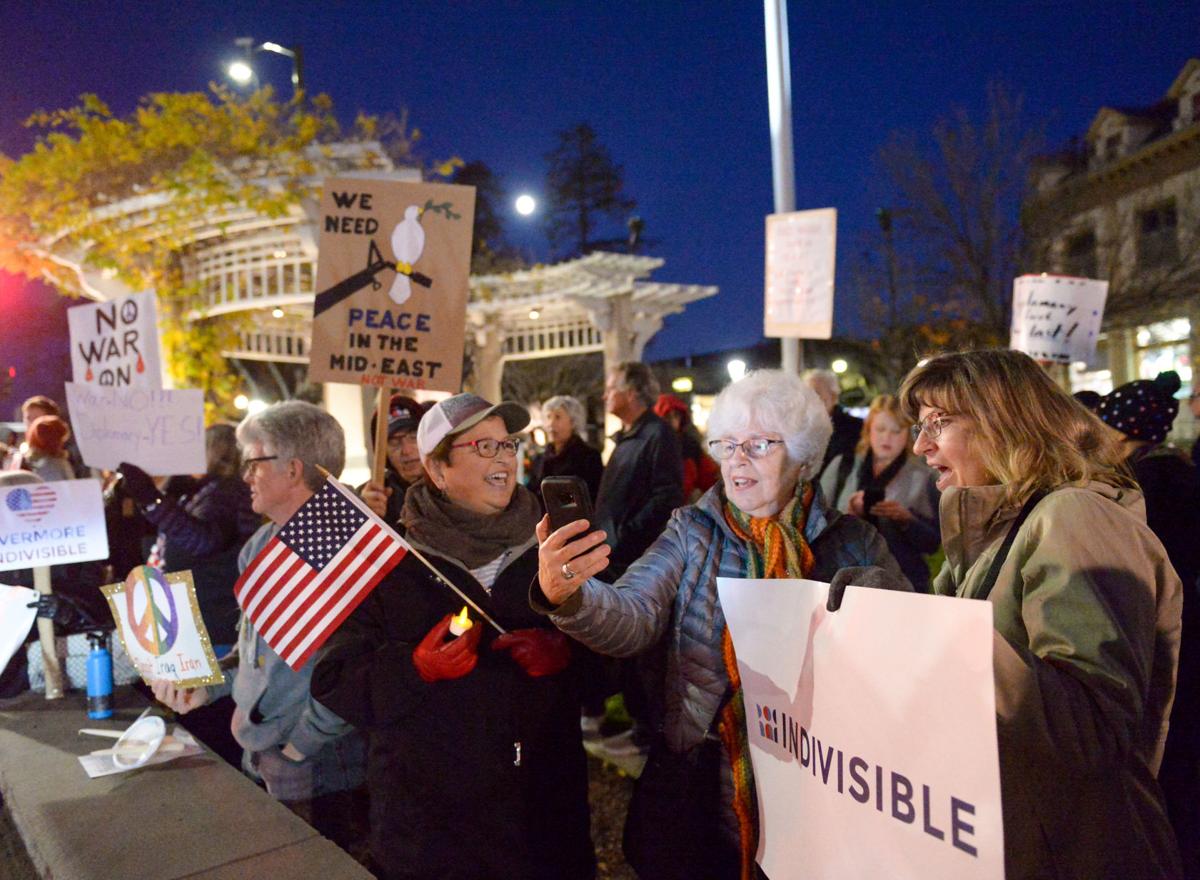 About 60 people gathered at the Flagpole Plaza in Livermore on Jan. 9 for a peaceful demonstration both opposing and supporting the killing of Iranian General Qassem Soleimani on Jan.3 by a U.S. drone strike near Baghdad International Airport.

Livermore Indivisible organized the #NoWarWithIran rally which started at 5 p.m. and continued until about 7 p.m. Although some protests earlier in the week across the U.S. were volatile, Livermore’s became a demonstration of democracy with both groups freely expressing their differing opinions concerning the incident.

More than 50 people opposed to the killing, and concerned about future escalations, held posters and called out “Peace Not War” to passing vehicles. The discussions among many of those attending also concerned possible retaliations against the U.S. by Iran.

“There is no bravado in war and there is no actual winner,” stated Dublin resident Mariam Noorgard. “Anti-war does not mean anti-American,” added Jim Schnitter, of Livermore.

Three of those attending in support of the strike against Soleimani carried American flags. “I am sticking up for the President,” said Mike Grant , of Livermore. “Those guys over there have been terrorizing their population for years, killing innocent citizens and our soldiers, some of whom I knew personally.”

Michael Duncan, of Livermore, did not concur. “Peaceful resolution of problems are usually the right way and most beneficial to all parties involved,” he said. Ward Kanowski from Indivisible of the East Bay agreed. He and others had already contacted U.S. Rep. Eric Swalwell to tell him they did not want war with Iran. “Support of a war powers resolution should involve discussion by members of Congress and not just be a decision of one person, even if that person is the President,” Kanowski said.

Livermore resident Dean Lunardi disagreed. “We elected Trump as President to build a strong economy, uphold the 2nd Amendment, and protect this country however he felt was necessary. He shouldn’t have to ask for congressional approval,” he said.

As the #No War group sang Bob Dylan’s “Blowin’ in the Wind,” Kursad Riziloglu, of Pleasanton, said, “The killing seems to be a replay of 2003. This decision may very likely send the U.S. marching toward a similar outcome, leading to further violence and extremism.”

Soleimani, 65, was a major general of the Islamic Revolutionary Guards Corps and commanded its Quds Force, which is responsible for extraterritorial military and clandestine operations. The fatal U.S. drone strike followed an attack he directed against the U.S. Embassy in Baghdad and an attack in December on U.S. forces in Iraq, where a civilian was killed.