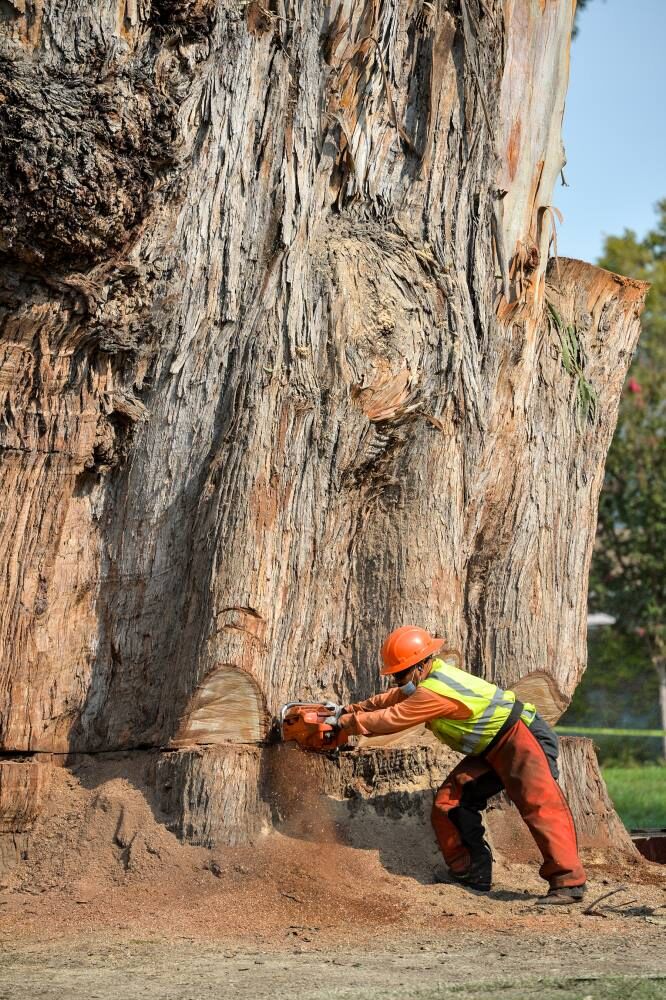 The massive eucalyptus that once stood in Lions Wayside Park in Pleasanton came down last week. Pieces of it will now become memorial benches. (Photos – Doug Jorgensen) 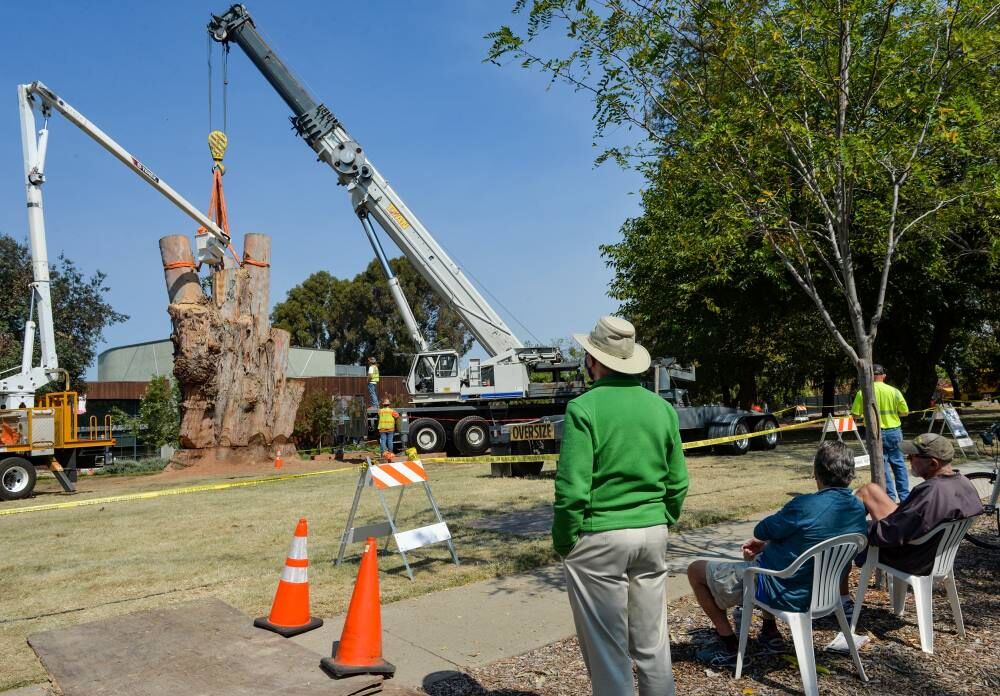 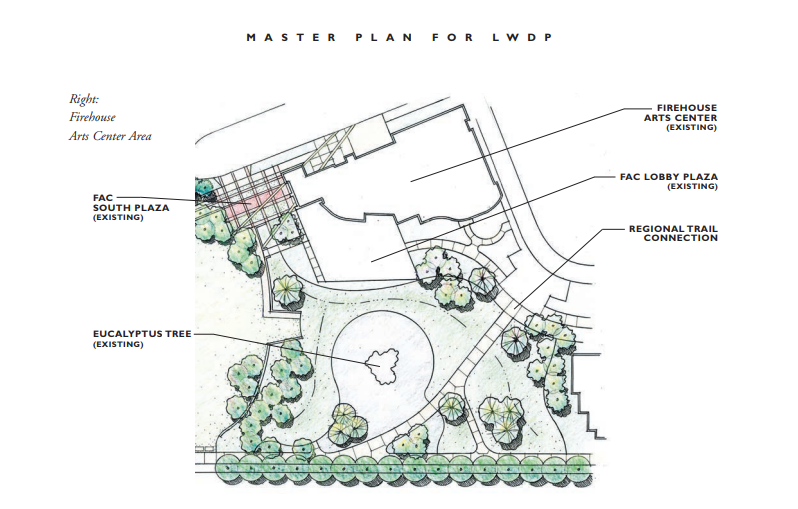 The massive eucalyptus that once stood in Lions Wayside Park in Pleasanton came down last week. Pieces of it will now become memorial benches. (Photos – Doug Jorgensen)

The historic eucalyptus tree that came down in Lions Wayside Park in downtown Pleasanton last week will soon find a new resting place.

Parts of the giant tree — believed to be about 150 years old — will now live on in the form of benches at Alviso Adobe Community Park, as announced by Matt Gruber, the city’s landscape architect, in last week’s Sept. 1 city council meeting. Alviso Adobe is an historical community park located off Old Foothill Road.

In the week before removal work began Sept. 2, the city made a Facebook announcement, reporting the tree was sick with an incurable sulphur fungus that had spread throughout its trunk and limbs. City Manager Nelson Fialho said the tree had already lost two very large branches over the last 12 months, “both of them weighing in excess of a ton and stretching the entire length/width of the park.”

Gruber further added the city has been monitoring the tree’s condition for years.

“Unfortunately at this point, the tree is at a point where it needs to be removed,” Gruber said during the Sept. 1 meeting. “The hazard and liability outweigh the benefit of the tree itself.”

The legendary eucalyptus was once a sight to behold, with its massive trunk and sky-high branches towering over the community for outdoor events like Concerts in the Park. And not everyone who had grown up playing in its shade wholly believed the city’s claim that it couldn’t be saved.

The tree removal was originally scheduled for Tuesday, Sept. 1, but a small group of protestors surrounded the base.

One of the protestors, Jeanne Barnes, said she had attempted to speak with city officials on the matter, as she believed the state of the limbs that were removed did not display a fungus.

“Every one of these tree arms ... the wood was in perfect condition,” Barnes said, adding that she’d contacted a horticulturist to examine the tree’s condition who said there was nothing wrong with the tree based on photos of early cuttings. “He said, if it really were diseased, you would see rot on the tree.”

She further noted the use of color in a graphic for a 2014 park development plan seemed to foreshadow the tree’s fate.

“It’s all part of their master development plan that was here back in 2014,” Barnes continued. “And something that was a bit suspicious to me was they showed on the whole plan that every tree was green, and they just did a little circle for this area (where the eucalyptus was), and it also looked like some of the plants had cement around them.”

The 2014 master plan for Lions Wayside and Delucchi Park can be found at http://bit.ly/Indy_WaysidePlan.

Another protestor, Jack Bras, took issue with the city’s process and lack of warning prior to chopping down the gargantuan plant.

“The city has a Heritage Tree Ordinance,” Bras said. “And they did not follow the process to remove it.”

The city’s ordinance spells out the legal process for removing a heritage tree, which can be viewed in its entirety at http://bit.ly/Indy_TreeOrdinance. The ordinance’s Emergency Action section 17.16.060 further indicates a heritage tree can be removed without following the outlined process “if there is an emergency caused by a heritage tree being in a hazardous or dangerous condition requiring immediate action for the safety of structures or human life.”

According to Cindy Chin, the city’s public information officer, there are no underlying plans to construct a parking lot in the area. She said lab tests conducted on samples from a fallen branch confirmed the presence of the fungus, which is often found in decaying hardwood. Chin reported that once a tree is infected with this fungus, it cannot be saved.

“Upon further inspection of adjacent branches, the fungus was discovered throughout the tree,” Chin explained. “Additionally, a wildlife ecologist examined the tree on Friday, Aug. 28, and again on Aug. 31 to verify the presence of any wildlife that might be nesting in the tree. None was found in either evaluation.”

During the Sept. 1 meeting, Councilmember Karla Brown asked if the stump could be turned into a table. Gruber noted that, while it can work for redwood trees, the stump and roots would need to be completely removed, as eucalyptus is prone to warp and rot.

While Councilmember Julie Testa said she understood the community’s grief, she was glad to see the city had found a way to honor the tree.

“People in the community have asked if they could have chunks,” Testa said. “And I did inquire about that, and I was disappointed but kind of anticipated the answer, because the city has a policy of not salvaging city property to the community. They said they will not let it go out to community members, but I’m going to ask about that again. Because if it’s just going to be chipped up or thrown away, it would be better for it to be allowed to be crafted into different things.”

A beloved tree in Lions Wayside Park in downtown Pleasanton saw its demise this week, much t…

Pleasanton residents show their thanks to firefighters leaving the Cal Fire base camp located at the Alameda County Fairgrounds. (Photos - Doug Jorgensen)