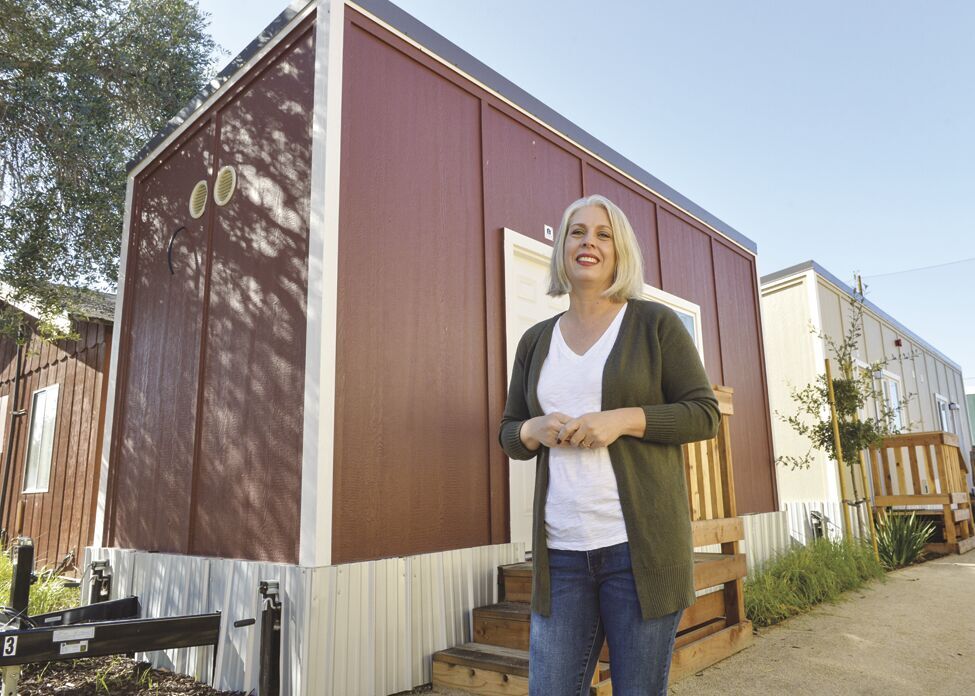 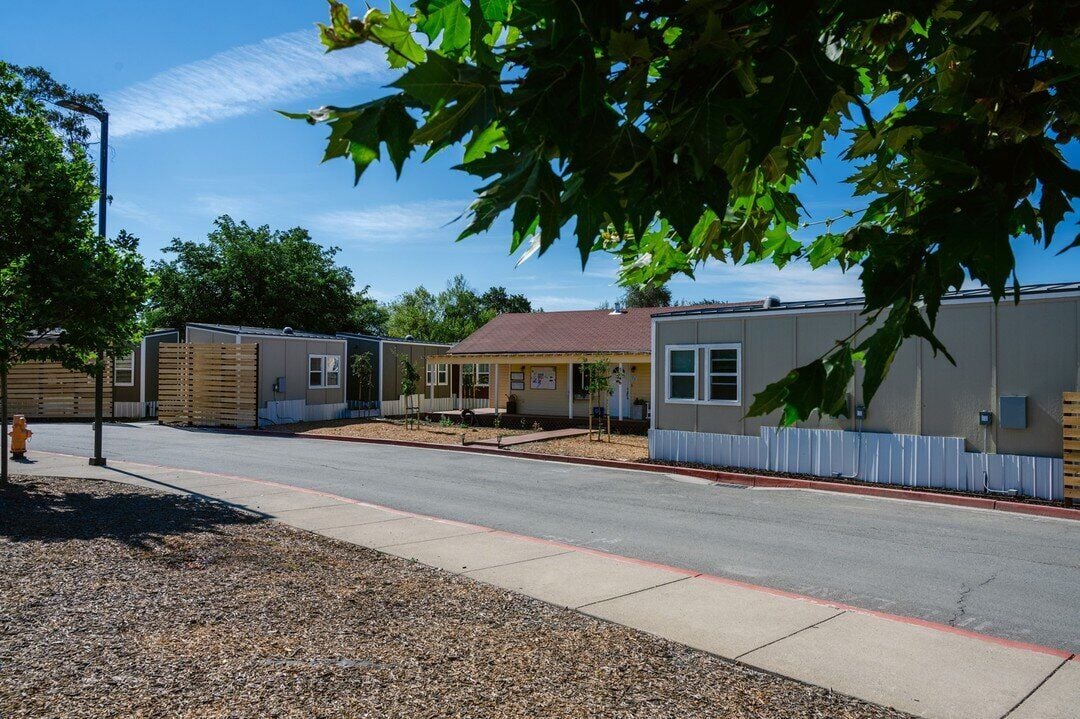 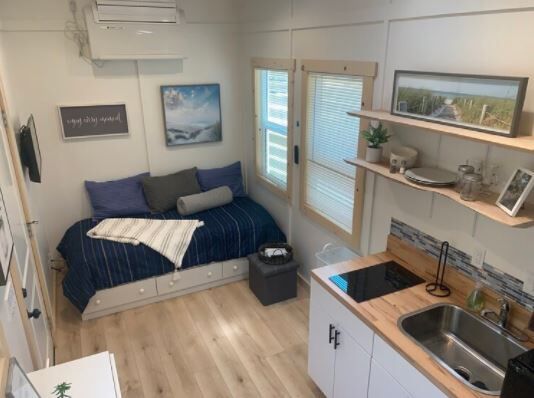 Nestled on the site of CrossWinds Church along Freisman Road in Livermore, Goodness Village consists of 28 permanent housing units for those who were experiencing chronic homelessness — having lived anywhere from 12 months to numerous decades on the streets.

While they’re still getting settled, the “neighbors” — as the Goodness Village team calls the new residents — have informed staff that eight homeless veterans they know are also in need. A licensed clinical social worker with over 15 years of experience, Curtis hopes to raise awareness about fund-

raising opportunities, such as Club88, through which donors can contribute one-time or recurring payments to help support services and facilities provided at the Village (https://gvlivermore.org/donate).

“We have a small community kitchen in our yellow house, which we appreciate, but it is a struggle when a neighbor wants to prepare a meal for all of their neighbors and there isn't enough space to do so,” Michaud said. “This would also make it easier to run events, classes etc. We have community meals every Wednesday and Saturday, so we are always looking for volunteers to prepare meals and break bread with our neighbors.”

Officials cut the ribbon on the development in May 2021 and began filling two homes at a time each week, beginning in June. The last unit was filled a month ago. Each home was decorated by an interior designer, who asked the incoming occupant about their personal interests, favorite animals or colors. As members of the Village, the neighbors are expected to pay a small amount for rent, observe the rules, participate in community events and help with upkeep. No one with a history of violence or sexual abuse/assault was accepted for a unit.

For those 28 individuals who had been chronically homeless before finding a home at Goodness Village, Curtis explained that there’s an overarching theme of trauma, mental health disorders and substance abuse. As the neighbors become more comfortable, the on-site staff that offers wrap-around services is beginning to understand each of their unique needs. Many of them will only talk about certain time periods of their lives.

“You can’t live in your trauma every single day and be able to survive — there’s a disconnect, and we’re working on getting them back inside their body in the here and now and present instead of the past or the future, which is often where folks that have been through trauma typically try to stay — because otherwise you have to be in that body and feel that body,” she said.

Without the guidance on how to work through trauma and live in the present, Curtis explained that those suffering often turn to a substance of choice. Some had turned to meth, which keeps the mind active and “you can feel like you’re getting stuff done.” Others might have used heroin or alcohol as a sedative. She noted that while these substances might have seemingly helped the individuals through certain phases of life, they also contributed to their state of homelessness. She and the staff now work with the neighbors on achieving healthier coping mechanisms.

Building that trust takes time, Curtis noted, which is why it was important for the housing to be permanent.

“If you feel like you’re always on the move, you won’t set roots — you won’t start to trust people. You never move out of that hyper-vigilance/always-on-the-go mindset in order to trust others (so that you can) work on yourself,” Curtis continued. “Who am I to say that in 18 months you’re going to be ready to leave after 20 years of trauma history? It just doesn’t work that way.”

She further pointed to studies that indicated a person — once placed in a safe housing environment — needs about 30 days of resting for every year they’ve lived on the streets before they’ll “start shedding the warrior suit.”

“So our folks who lived on the streets for 15, 20 years, it’s just not going to happen right away,” Curtis continued. “With a lot of the transitional programs, they bring you in at very low rent and then at 24 months, you’re supposed to pay basic market rent and come up with a deposit and first and last month’s rent. Where does this money come from, especially when you’re on social security or disability and getting $900 a month? Where is this money coming from?”

Michaud agreed, pointing out that how each person adjusts to a new community looks different as well.

“We've had people move in and be very excited before the realization that they are permanently housed sets in, and causes some anxiety,” Michaud said. “There are some who are starting to feel sad or anxious that they have begun a routine/feel at home, (but) are now worried that someone will come in and take it all away from them. The great part about Goodness Village is our barrierless approach, as we want to meet everyone where they are at.”

Part of the therapeutic process also involves going through the items the neighbors have collected over the years.

“They come with a lot of stuff — when they first become homeless, they more than likely left with a backpack of their most prized possession that, along the way, were either taken when they got arrested or stolen,” Curtis explained. “So imagine recouping and then having that gone again, and then recouping and then having it all gone again — at some point, your brain says, ‘I have to keep all of this, because you never know when you’re going to lose it.’”

Going through loss and upheaval throughout life, Curtis said many struggle to let go of their possessions, because everything contains a memory. She shared that one man still keeps the clothing that possibly belonged to his children before they grew into adults.

“We’re taking it slow and processing this and learning more about the residents as we go,” she continued. “If you only look at the outside, you can make a lot of judgments. When you start to hear the stories and their reasoning, it’s a lot of sadness.”

Curtis and her team are also hoping to change a misconception, as many people don’t understand why unhoused individuals simply don’t get jobs.

“They have a co-occurring disorder, whether that’s a medical diagnosis, mental health or history of substance abuse — they really need that higher level wraparound care,” she said. “They are primarily on social security, so most won't earn more — it’s unlikely that they can earn market rent in the Tri-Valley, but their roots are here. They went to high school here and had families here; they're wanting to stay in that familiar space. One of our guys has had 37 jobs in the last five years, so it’s not a lack of wanting to work or a matter of laziness, but really a diagnosis that creates this inability to retain long-term employment.”

Curtis continued to note that Goodness Village’s goal is to build community, while taking each individual from “surviving to thriving.”

“Whereas the housing-first model was taking people out of the creek and putting them in apartment complexes, isolated from other support and saying, ‘You can’t bring your support system here without being kicked out,’” she said. “You can bring your friends here; we would love to have your friends visit. They can’t necessarily stay the night, and if they don’t take care of the Village in the same way you will, then they can’t come back. So far, the neighbors have been really good about that.”

Curtis further noted that the communities of Livermore and Pleasanton have shown up for Goodness Village in big ways. Mony Nop has hosted Taco Tuesday events to raise funds for the organization. Another Nov. 13 chili cook off, judged by Livermore Councilmember Robert Carling and Pleasanton Councilmember Kathy Narum, also put 100% of the proceeds toward Goodness Village.

“I appreciate the unique approach of Goodness Village in working to be part of a complete solution for the homeless problem in the Tri-Valley by creating a sense of community with 28 tiny homes,” Narum said.

WorkDay has offered tech training for the neighbors. And Miracle Messages, founded by Kevin Adler, has worked to reunite some of them with family members. Curtis said one person reconnected with their mother for the first time in five years.

Michaud added that even two neighbors were reconnected with each other after they had both lived in the creek encampment. Once they recognized one another, the pair began playing games, cooking meals and working on vocational tasks together.

“After about a month of this, they pulled me aside and said, ‘I can't thank you enough for letting me be here. This has saved my life. I love that I can still be with my friends, but now we're safe, warm and on a path to getting healthy again,’” Michaud shared. “That day reminded me that everyone who lives here was always searching for a community, and would find it, sometimes in unsafe locations. However, with Goodness Village, they are surrounded by their community, able to access support 24/7 and able to recover in peace.”

Cellar Door in Pleasanton will host a fundraiser on Sunday, Dec. 12, from 4 to 8 p.m. Proceeds will go toward Goodness Village and Agape Villages Foster Family Agency. For more information on Goodness Village, upcoming events and donations opportunities, visit gvlivermore.org.