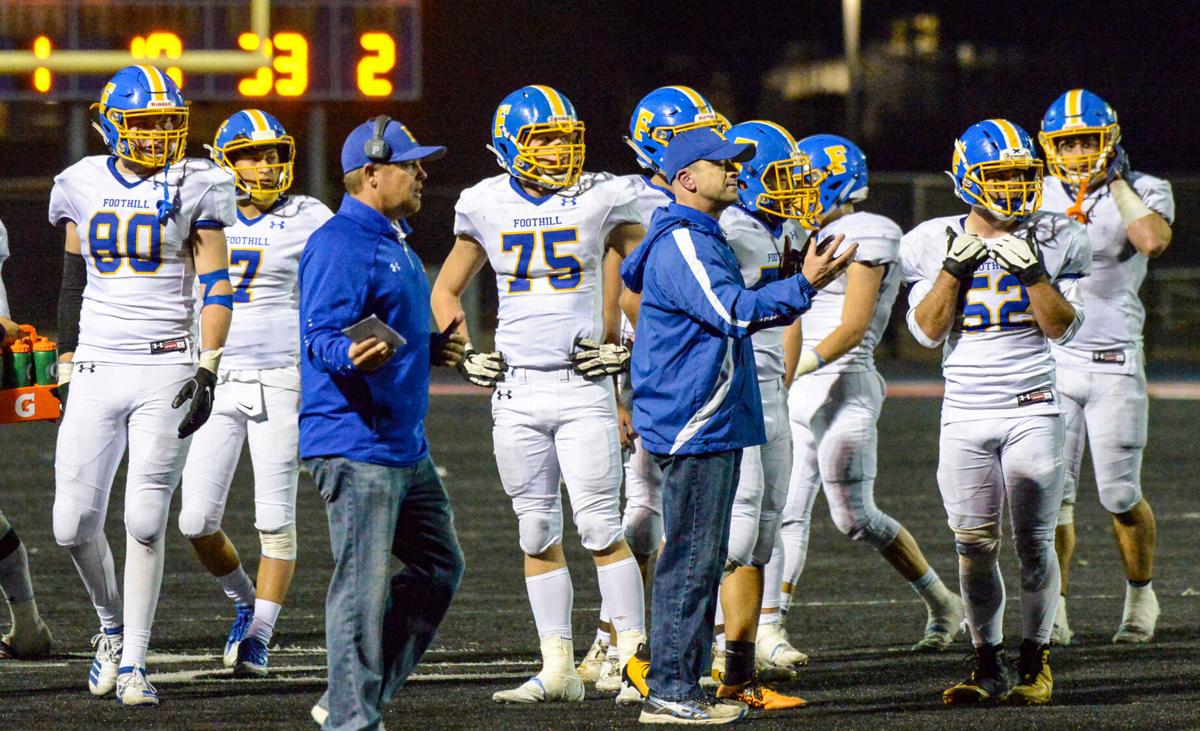 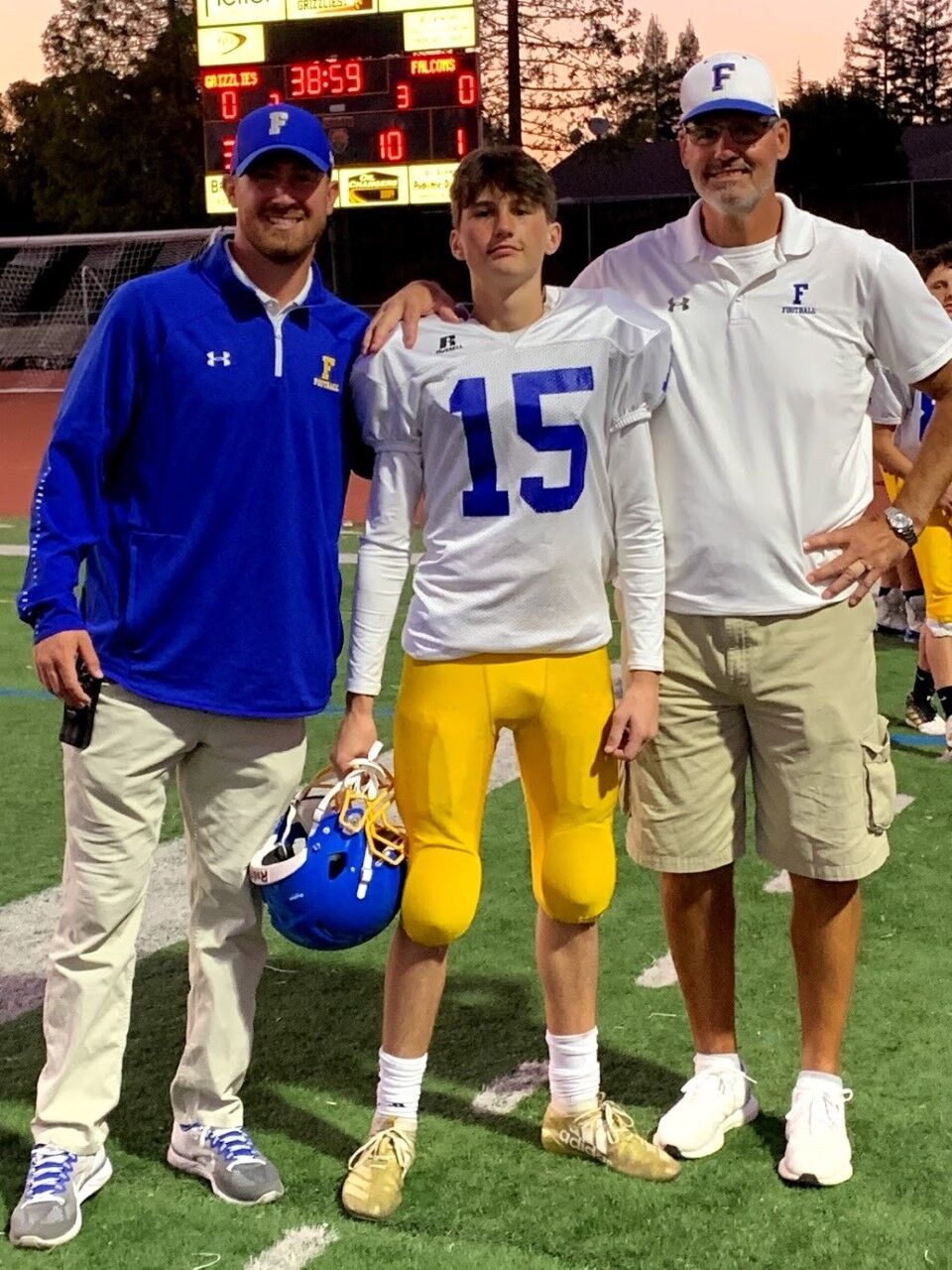 Last year, Millard and his dad, Keith – the 1989 NFL defensive player of the year with the Minnesota Vikings – teamed up on the Foothill junior varsity staff, with Johnny as head coach and Keith as defensive coordinator. Rounding out Team Millard on that junior varsity squad was dedicated tight end and linebacker Kade Millard, Keith’s youngest son. That’s a lot of Millard mojo in one program, but Haubner is thrilled.

He describes Keith Millard, a Foothill graduate, as a tremendous football coach and a great man, and compares the Millards to another iconic Pleasanton family.

“The Millards are very much like the Madden family, extremely down-to-earth in how they talk to people,” Haubner said. “Bigtime football backgrounds and generous with their time … Wonderful for the game, an absolute benefit to the game.”

“A (hell of a) football coach and an enormous human, a mountain of a man,” Haubner said of Badger. “He played for Bill Walsh at Stanford – a really, really, good man. Incredibly good for the kids. An offensive line coach with a big heart.”

Falcons junior Kenny Olson, an emerging star at wideout and in the secondary, is the son of Las Vegas Raiders offensive coordinator Greg Olson. Kenny ‘passes the eye test,’ just as Foothill senior stalwart Peter Montini, now at Nevada, did last season. The Olson family is first class, by all accounts. Kenny’s twin sister, Grayce, is a Foothill volleyball phenom at 6 foot, 4 inches.

“Both are fantastic kids. Mom (Lissa) and dad are awesome people,” Haubner said.

Of course, the varsity football season is on hold during the COVID-19 pandemic, and full practices can’t start before Dec. 14. Smoke-filled air from wildfires and other factors have also conspired against high school athletics.

“We have smoke with fires; we have social injustice; we have a pandemic. But in three months we’ll have our first practice,” Haubner said, sizing it all up.

Of Foothill’s NFL connections, Haubner believes having the Raiders and 49ers around for so long helps account for it. A big plus for Foothill is that the coaches’ sons comport themselves like professionals too.

“We’re spoiled in that regard with coaches and players’ sons,” said Haubner, who was Johnny Millard’s junior varsity coach at Foothill. “The best part about it is they’re really good people. I can’t overstate it. John (Millard), when he played, was one of the hardest working people and a wonderful, wonderful guy. Kenny Olson is a similar type of kid. When Kenny walks on the field you will notice, it doesn’t take long. He is lean and strong, fast and athletic.”

Keith Millard looks at Haubner as just one of the guys.

“He’s one of us. We’ve all been around each other forever,” Millard said of the brain trust. “Like Badger, I coached Badger when he was playing with the Raiders, and I remember running into him at Foothill when (the Raiders) came back. It was awesome to see him coaching high school ball, because there’s so much we can do for these youngsters, not just in football, but in life.”

What adds charm to the Foothill experience is the fellowship among coaches and players. It’s not about who’s who but player development.

Keith Millard, who intends to step back a bit this year in his role and enjoy being a dad, says he tries to connect with every player to ensure they have a positive experience.

Millard, 58, had a storied NFL playing and coaching career. He retired in 2014 after coaching stints with the Denver Broncos, Raiders, Tampa Bay Buccaneers and Tennessee Titans. As a player with a seemingly nonstop motor, Millard held the NFL sacks record for a defensive tackle for nearly 30 years, with 18 in a season. He played nine NFL seasons for four teams and was a dominating defensive force from 1986 to 1990, earning two trips to the Pro Bowl, among other accolades.

Johnny Millard learned a lot about all aspects of the game from Keith, especially coaching.

“I always appreciated how he approached the game – how he approached film study, how he approached evaluating players, working with players and building that relationship,” Johnny said. “He loved the camaraderie part of the game, but he also loves just the ‘strategic-ness’ and the preparation that goes into it. He is such a teacher. I remember Coach Sweeney was watching our practice a year after his retirement, we were talking, and he goes, ‘Your dad is such a good teacher. He really focuses on the small details and they’re never overlooked.’”

Johnny served as ball boy for two years when Keith coached in Oakland. As a player - a late bloomer like his dad - Johnny amassed 302 career tackles as a linebacker at Cal Poly (No. 6 all-time at the school). He recorded 108 tackles as a Mustangs senior in 2013.

Off the field, Johnny is an enterprise account executive at Workday, and his wife Cristina is a former soccer player at Cal Poly. His dad’s NFL impact was still prevalent when Johnny tried to catch on with the Rams as a free agent.

“He played with a super-high motor,” Johnny said. “I remember when I was playing with the Rams too, and I was in Aaron Donald’s rookie class, and everyone was talking about how quick his ‘get-off’ was, and I remember Coach (Mike) Waufle, the defensive line coach at the time. He said, ‘The last time I saw a ‘get-off’ that quick was your dad.’ That was cool to hear, because Aaron Donald breaks his (sacks) record a couple years later.”

On many levels, Keith says it’s pretty cool being connected to the Falcons program.

“It’s awesome to go back there all the time and reminisce about the old days, what the field used to look like and the things that we did when we were there, so it’s exciting,” he said.