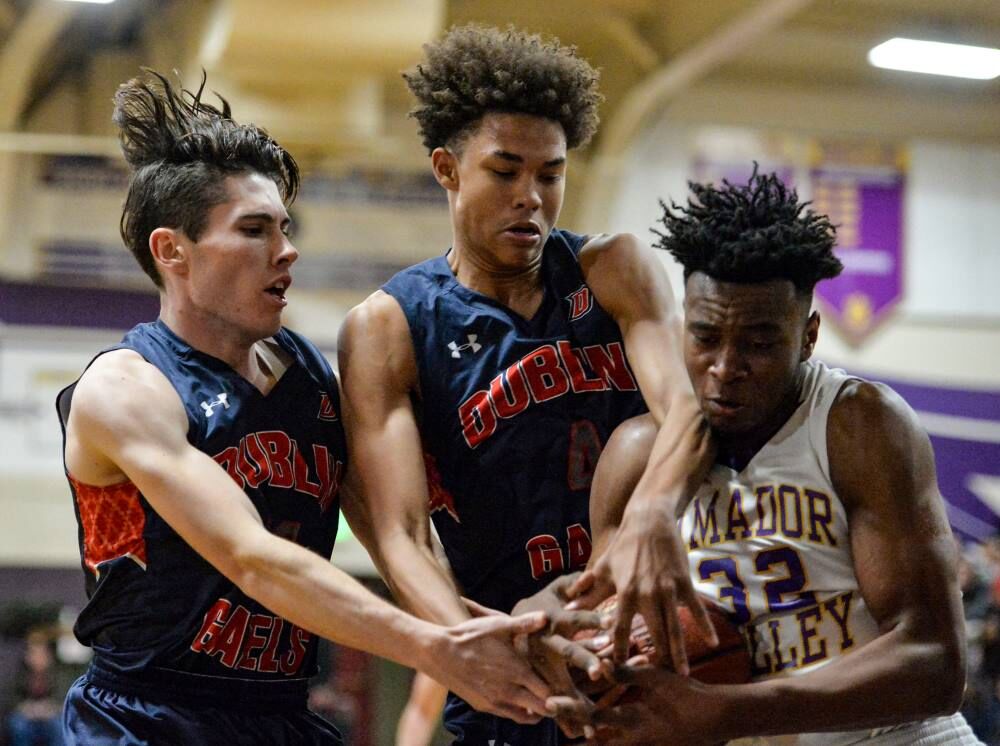 During a 2019 game against Amador Valley High, Skylar Robinson #4 Dublin wrestles for the ball (center of photo) and goes to block a shot (next photo). (File photos) 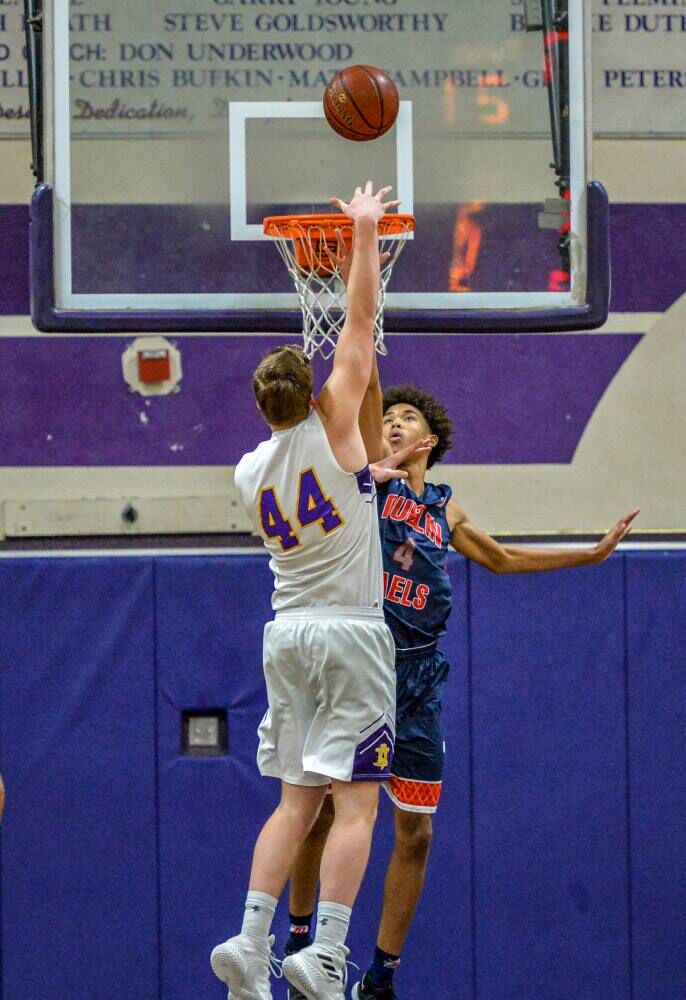 During a 2019 game against Amador Valley High, Skylar Robinson #4 Dublin wrestles for the ball (center of photo) and goes to block a shot (next photo). (File photos)

On and off the basketball court, Skylar Robinson is an impact player for Chabot College.

The 2019 Dublin High graduate, who stands 6-foot-8 with a versatile playing style, is making a lasting mark through his leadership and charisma. The communications major is president of the Striving Black Brothers Coalition at Chabot, a support group for African American students, and has been a leader in discussions surrounding social justice. He is also a student peer guide in general counseling and special programs.

“People like him,” Chabot coach Keenan McMiller said of Robinson, a 3.5 GPA student. “His peers like him, and the administration likes him. I think next fall, he’ll probably be the ‘poster child’ on the cover of the Chabot class course schedule magazine ... I don’t think there’s been a student-athlete on there for quite some time, but it’s hard to find a student-athlete like this in any of the programs at our level.”

At Dublin High, Robinson quickly became popular on campus after transferring from nearby California for his senior year. Gaels coach Tom Costello vividly remembers how seemingly everywhere he went on campus, teachers, counselors, and administrators would say, “Skylar this, Skylar that,” Costello recalled this week.

Currently, Skylar and his Chabot teammates are awaiting the green light to even have a season during the COVID-19 pandemic. Things have stalled statewide for team sports, and McMiller fears that there won’t be enough time to complete an 18-game season by the state’s April 16 deadline.

“I’m trying to pretty much keep a positive mentality,” Robinson said. “It’s easy to get down not knowing if we’re going to have a season or not. That’s very impactful to guys at the community college level trying to transfer to a four year, so I’m just trying to stay positive, stay in shape, things like that.”

His goal with the Striving Black Brothers — Chabot has about 2,000 Black students — is basically to get people graduated within two years with an A.A. degree and ready to transfer to the four-year level. Five or six players on the successful men’s basketball team last year were part of the support group.

“That’s definitely been one of my highlights at Chabot,” Robinson says of his role. “It’s taught me a lot of life skills professionally and academically, and it’s helped me build a lot of connections. We also do community service in the Bay Area, like Hayward, Oakland, and Alameda — things like that — so it’s been really cool.”

A late bloomer on the court, Robinson has received an offer from Division II St. Martin’s University in Olympia, Washington, and at least three other Division II schools are interested, but McMiller sees a Division I future for Robinson if he stays patient.

“My dad always tells that there’s more than one way to get to a goal, so he always uses himself as an example of the guy that went the junior college route and ended up going Division I, so he’s part of my inspiration, just staying the course” Skylar says. “I didn’t have any offers coming out of high school. I’m doing the junior college thing, and I’ve had pretty good success with it.”

The 2019 to 2020 season for Chabot ended with a heartbreaking loss to Diablo Valley College 74-72 in Round 1 of the NorCal playoffs. Robinson had seven points, eight rebounds, along with two assists, three blocks and a steal in the tough defeat. He averaged 6.3 points a game for the season, and is expected to be a NorCal standout as a sophomore.

The DVC game has stuck in the minds of the Chabot players. DVC made the last shot to win it after the host Gladiators led at halftime. Robinson takes ownership for the outcome.

“It actually really stung, and that last play was on me defensively,” he recalled. “I blocked it at first, and then somehow, he still had the ball and it went in. We really thought we were the better team in that game, and I think we would win that game if we played it again, but it was definitely a heartbreaker. It really was.”

Even though Robinson will surely have other options down the road, basketball is his main focus.

“I am definitely looking to play for as long as possible,” he said, “I am definitely going to see wherever that takes me, but career wise, my major is communications. I have a hard time figuring out what my passion is other than basketball, but I just want to keep my options open. I know I can speak pretty well, I’m kind of good in the academic setting, and I (have) a little experience with that now. At first, I was thinking sports journalism or sports broadcaster, just to stay connected with the game. My uncle still works for the NBA as a drug counselor for the rookies and stuff. That’s kind of cool. He still stays involved with the game, so I like that about his job.”

No matter where the road takes him, Robinson is making an indelible mark at Chabot. McMiller says Robinson takes pride in everything he does.

“I couldn’t ask for more,” the coach said.