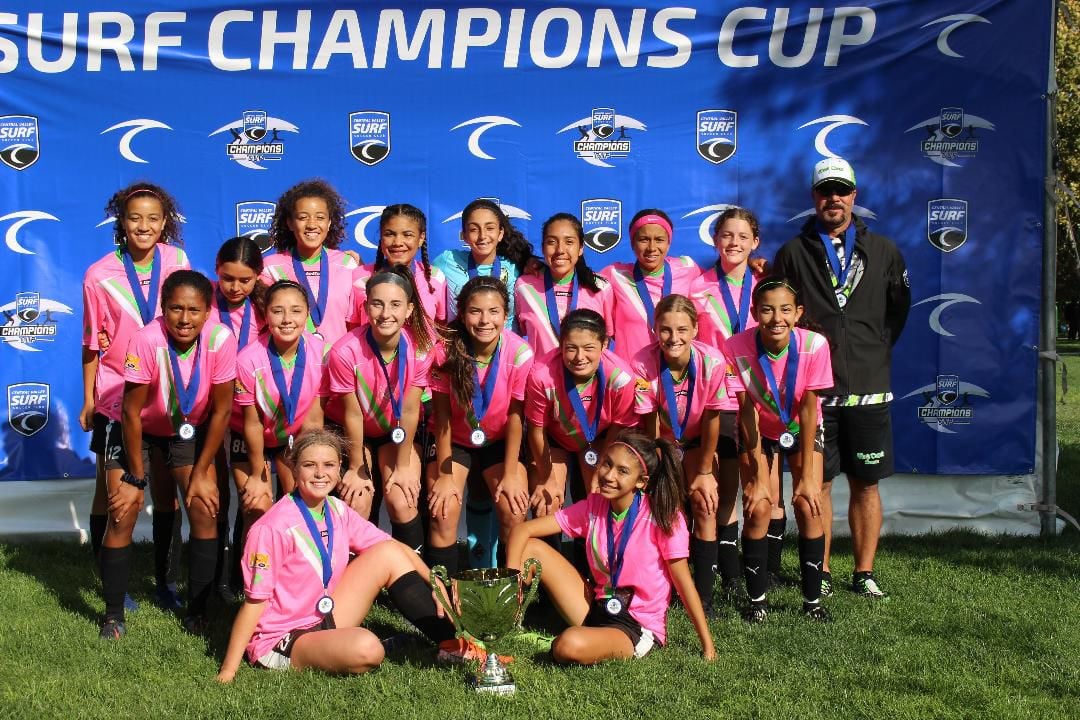 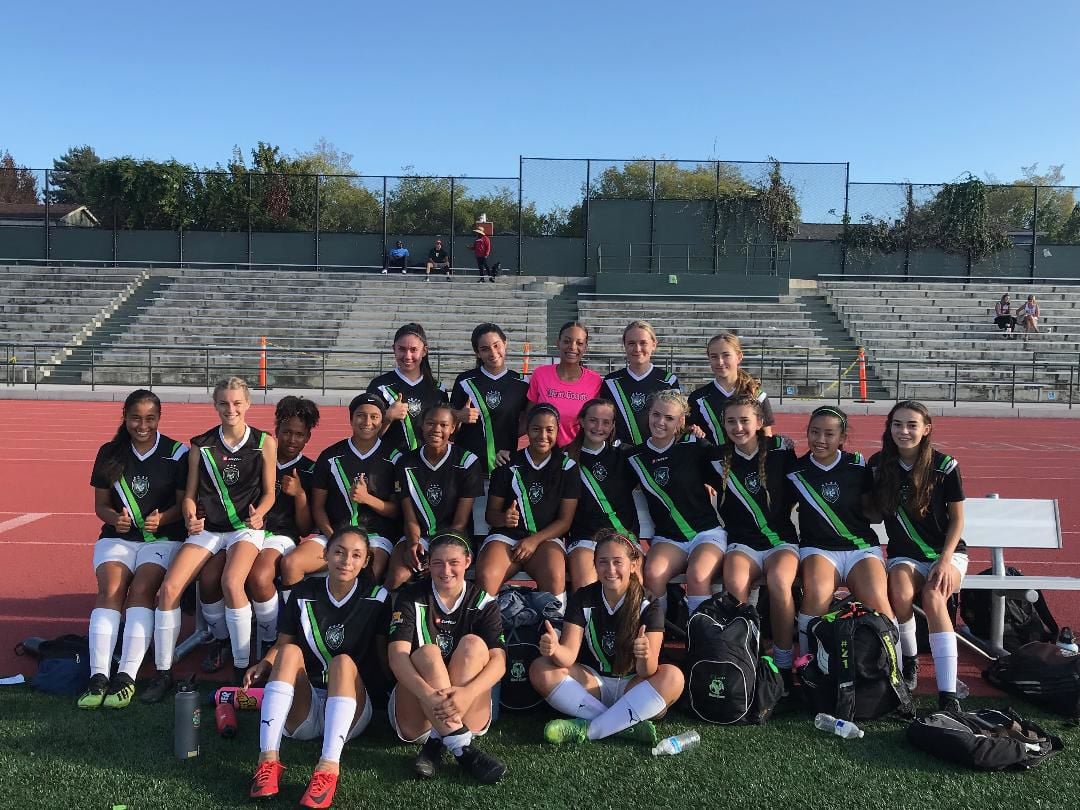 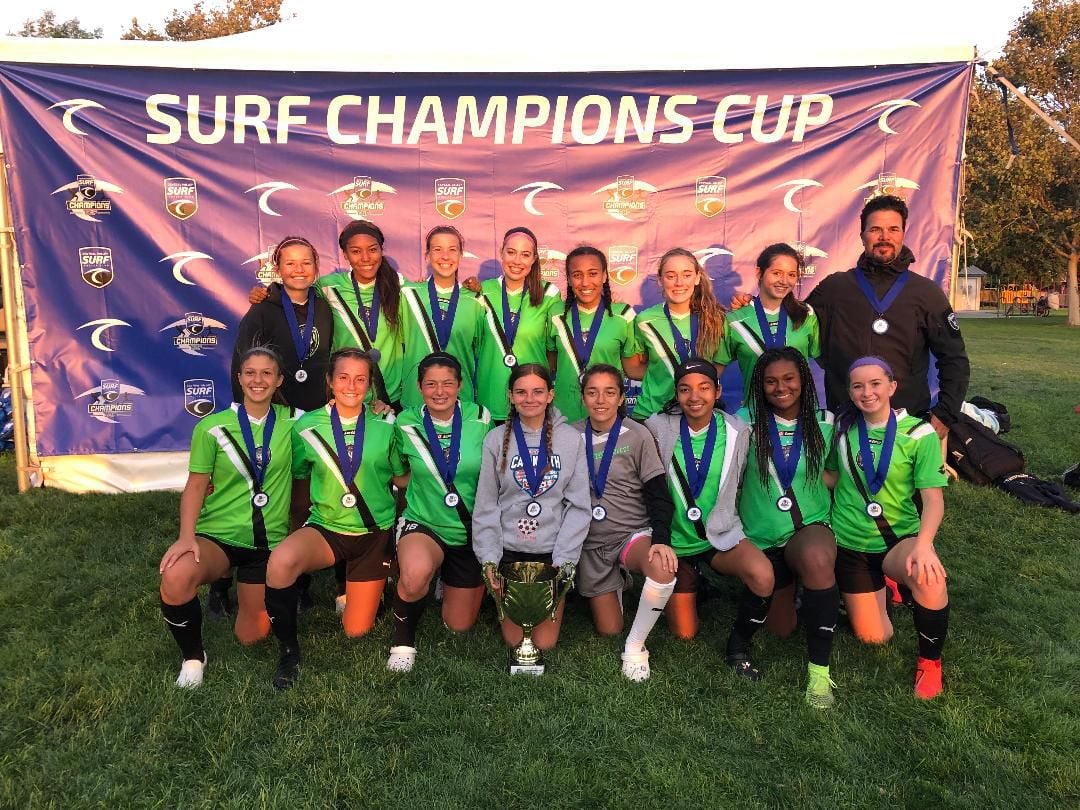 West Coast 02 Girls NPL team won back to back games by shutout. Saturday, West Coast traveled to Santa Cruz and beat the Breakers 2-0 with goals from Bailey Gualco started the scoring five minutes into the game on a one vs. one with the keeper with a great pass from Erin Strain. The second goal was scored via penalty kick by Aryana Jones. The net was patrolled by Lia Bedford solidifying the shutout. Sunday, was the first game of state cup preliminary play at Hotspurs and West Coast won again by a score of 3-0. The scoring began in the forty second minute by Jessie Sotelo from an assist that started with Alyson “Taz” Thompson then Susan Contreras. The second goal was scored by Anaya Shelton from Jessie Sotelo with a De Bruyne type cross. The final goal was scored by Shelton as well from a through ball by Alondra Higareda. Leilani Staples and a strong defensive effort keyed the shutout.

West Coast Soccer’s U16 Wicked girls team dominated the Central Valley Surf Champions Cup and brought home the Championship in the 04 Super Group Division. West Coast teams traditionally do well in the local tournament held throughout multiple locations in the Central Valley. This year was no different as the Wicked girls swept the competition to bring home the tournament crown. West Coast defeated Walnut Creek Surf 4-1 and Turlock Academy 1-0 to position them at the top of the standings after Saturday’s games. West Coast put on an attacking clinic as they took care of Mavericks 5-0 to set up the championship game against a tough IR Academy Purple. The Wicked offense was led by the extremely talented front line of Anaya Shelton, Zusette Zamora, Aryana Jones, Kaya Scott, Bailey Gualco and Miette Sessoms. The midfield was controlled by Makeila Yancey, Maddie Herrera, Miranda Valle & Alexi Ochoa. Defenders Sabrina Rogers, Andrea Castillo, Allyson Thompson, Mariah Hinojosa, Niella Sessoms held down the back line and limited scoring opportunities, while youngster Jordan Oshana minded the Wicked net for all four games. West Coast out played and outscored IR Academy for a 2-1 result with goals from Kaya Scott & Bailey Gualco, West Coast Soccer’s Mary Jane Anzo received player of the tournament award for her outstanding leadership and play. “Winning the Champions Cup Tournament is a great way to keep our momentum going, we will enjoy it for now but the team must refocus on a grueling Champions League play ahead.” Says Coach Troy Dayak. Wicked are currently undefeated in NPL Champions League and have the first round of State Cup ahead. West Coast Wicked are back in league action on Saturday against Cal Odyssey.

On Saturday, West Coast Warriors U19 Girls geared up to play the #3 ranked team in NorCal, Ceres Earthquakes. Arianna Moore got things rolling for West Coast with a nice assist to Mia Mendoza putting WCS up 1-0. Next, Jaden Hall would find Mia again to make the score 2-0. West Coast would find the net 2 more times in the first half with goals from Jaden Hall and Heather Tarabini for a half time score of 4-0. Midfielders Kaitlin Carlton Ashleigh Ward, Melanie Nguyen, Francesca Pereira and Fayth Hinojosa kept the ball moving while making great passes up and down the field. During the second half West Coast Warriors would score three more times with one goal from Heather Tarabini and the other two goals coming from Mia Mendoza who orchestrated a four goal “haul” game. Earthquakes would turn up the heat but were unable to get through Warriors stingy defense led by Leila Ganz, Ari Moore, Holly Mcritchie, Jordan Brown and Linsey Plant who held the #3 state ranked Earthquakes scoreless. Goalie Tori Morfin registered the shutout out win with a final score of 7-0. West Coast Warriors faced Earthquakes East Valley who came out firing to score the first goal. The lead would not last long as Jaden Hall found Heather Tarabini for a score to tie the game at one a piece. Beautiful passing by Fayth Hinojosa Kaitlin Carlton, Jessa Lyons continued to keep the ball in play. Defender Julianne Munoz made a run up the sideline and crossed to Heather Tarabini to take the lead before the half at 2-1. Second half both teams would continue a back and forth battle but West Coast 01 Jaden Hall flew up the middle of field to put the ball in the back of net strengthening the lead to 3-1. West Coast defense kept Earthquakes to a scoreless second half solidifying the 3-1 win. On Sunday, West Coast faced a tough Revolution SC, although Revolutions goalie proved to be extremely stingy throughout the tournament midfielder Fayth Hinojosa got things started with a beautiful shot right over Revolution goalies fingertips putting WCS up 1-0. Revolution played a quick restart and hit a nice shot to tie the game up 1-1 before the half. Second half West Coast offense came out firing and again midfielder Fayth Hinojosa put the moves on the revolution defense to find Caitlin Garrison who scored on left side of goal giving West Coast the lead at 2-1. Great defense by Leila Ganz, Ari Moore Jordan Brown Lindsey Plant and Julianne Muniz held revolution offense scoreless the remainder of game. Jaden Hall solidified the win for a final score of 3-1. Championship Game, West Coast Warriors faced off once again against East Valley Earthquakes for the Championship match of the tournament. East Valley with something to prove would come out fast and aggressive but it was the speed of West Coast forward Jaden Hall crossing to Heather Tarabini again to give West Coast a 1-0 lead. Jaden Hall was a nuisance on opponents outside backs and slotted another beautiful cross this time to Ashleigh Ward who perfectly placed the ball in the back of net increasing the lead to 2-0. Asleigh Ward scored again with another shot just before the half to put West Coast up 3-0. Second half the EV Earthquakes managed to get a goal off a loose ball in the box from a corner kick making the score 3-1. West Coasts offense iced the Earthquakes defense and the match by scoring twice more with goals from Mia Mendoza and Jaden Hall for a final score of 5-1 in the Championship match. “I’m just so proud of these young ladies, I have coached them for many years now & this will be our last Central Valley tournament together as our team is made up of seniors and will be graduating next year. I will miss them so much” said Head Coach Troy Dayak. West Coast Warriors 01 will be back in action next weekend for NPL Champions League play.

An African American Cultural Celebration was hosted by the Livermore Valley Performing Arts Center in the Bankhead lobby and plaza on Saturday, Jan. 11.