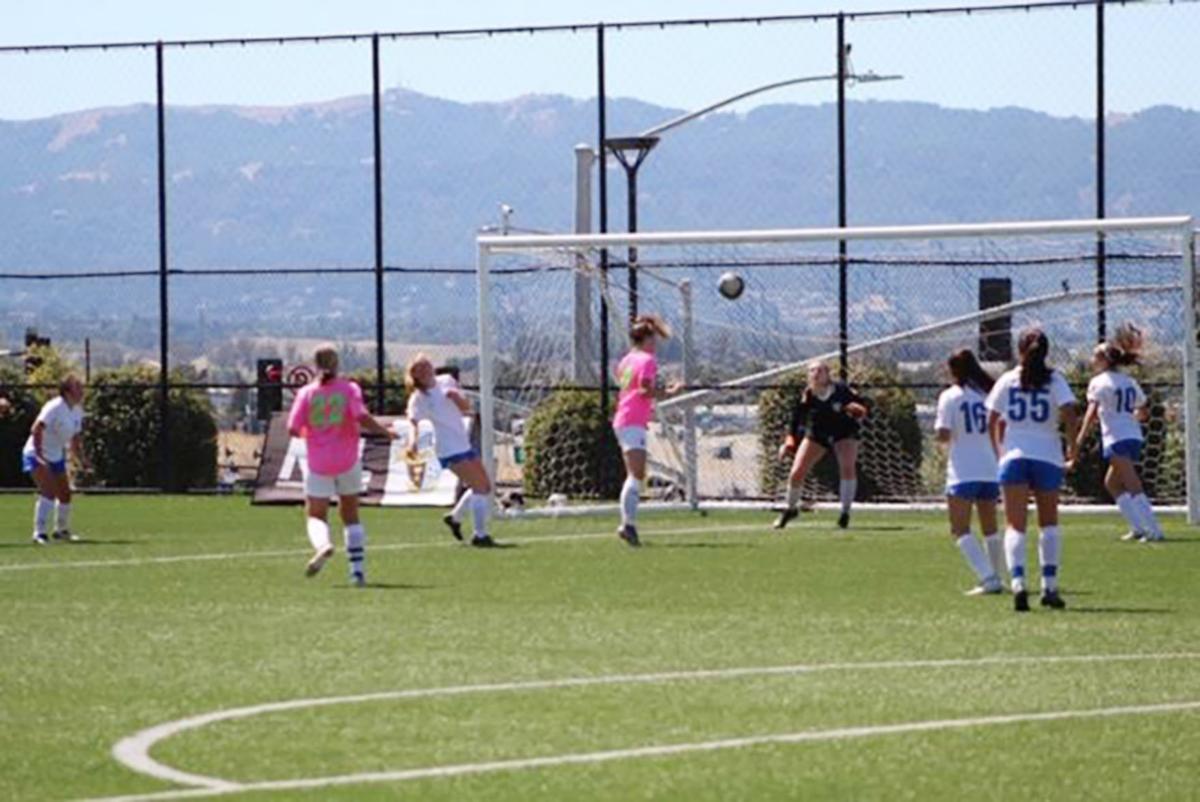 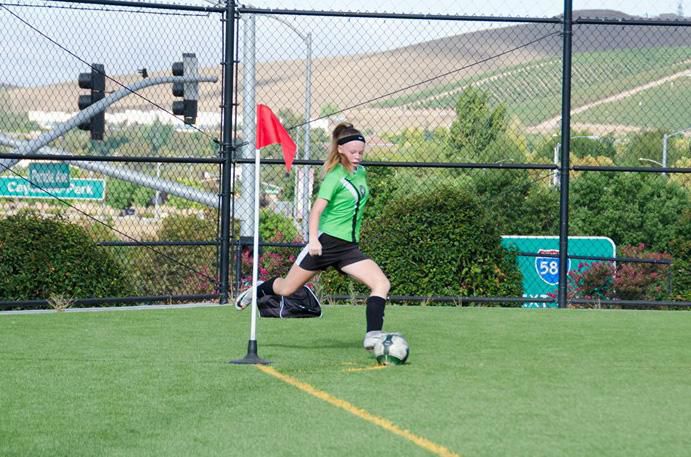 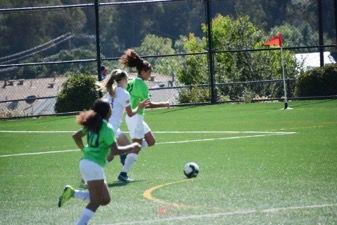 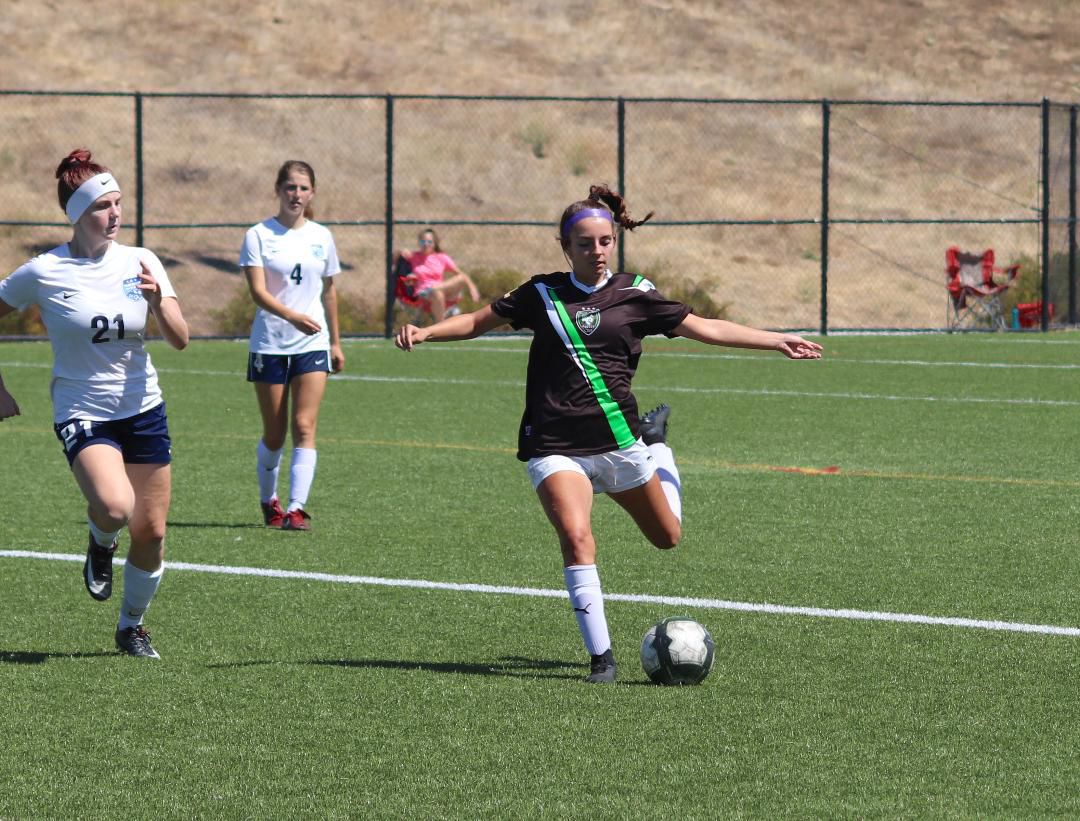 West Coast Wicked U16 Girls played their first game of the season in the Norcal NPL Champions League on Sunday against Santa Rosa United ECNL. The game was highlighted as The NPL Champions League Game Of The Week and NorCal was on sight at Cayetano Park in Livermore to film the game and get some post game interviews. West Coast Wicked knew they were going to have to come out strong against ECNL competition and they did, Kaya Scott had a beautiful cross to Bailey Gualco who skied high to head the ball past Santa Rosa for the first goal of the game. Anaya Shelton streaked past two defenders and got fouled in the box setting her up for a pk and nailed it in the back-left corner. The first half ended with a 2-0 West Coast lead over Santa Rosa ECNL. Santa Rosa managed to sneak in a goal in the 52:00 minute of the game but Wicked quickly reorganized and had solid defense to hold off any further attacks ending the game in a 2-1 win over Santa Rosa ECNL. “Our Wicked team performed outstanding under a ton of pressure playing in their first ever Champions League game, I’m proud of the way the girls played” said West Coast Wicked Coach Troy Dayak. This was West Coast’s second victory of the day over ECNL opposition. For more information regarding team Wicked go to www.westcoastsoccerclub.com

West Coast Soccer's premier 06 girls' team, Krossfire, took to the pitch Sunday morning against Marin FC 06 ECNL. This was the home opener for West Coast Krossfire in their first season playing in the NPL Champions League, the highest level of competition within the NorCal National Premier League. Krossfire's smooth passing and offensive attack generated many scoring opportunities throughout the first half. Marin's defense would stay strong deflecting and blocking multiple Krossfire shots until the 21st minute when Gianna Ramirez froze the goalkeeper and knocked it in to give Krossfire the 1-0 lead. Marin would answer back in the 28th minute, knotting it up at one a piece. After halftime adjustments by both teams, the second half was a battle for control of the midfield. Krossfire's defense was able to negate any Marin attack. As the clock was winding down on what was looking to be a tie game, Krossfire would generate a corner kick opportunity and Paige McLean stepped up to send the ball into the box. Players from both sides positioned for control but the ball ultimately found the back corner of the net giving Krossfire the 2-1 last second victory. “It was a great way to end the game for our 06 girls and a awesome way to start the day off for our club” said coach Troy Dayak.

Next up for Krossfire is another home game against Walnut Creek Surf on Saturday, September,14.

West Cost Soccer Club’s girls 05 team Wildkatz started the NorCal NPL Champions League play with a match against Santa Rosa United ECNL. With several new players and players returning from injuries, Wildkatz were eager to take to the pitch and prove they are a force to be reckoned with. As the match began, Wildkatz showed skill in passing and had several shots on goal. Midway through the first half, Taryn Richey stripped the ball from her opponent and made a pass to Kamiryn Grimes who took the ball around Marin’s goalie and slotted for the first goal. With a 1-0 lead, Wildkatz kept the pressure on and had many more opportunities to score while Wildkatz defense and goalie Bella Gelao kept United from scoring. Shortly before the end of the first half Miette Sessoms had a great burst dribbling the ball past several United defenders and as the goalie came changing at her, she slipped the ball past the goalie and into the back of the net extending the Wildkatz lead 2-0. Santa Rosa ECNL came out aggressively as the second half began. Wildkatz defense would continue to shut down United’s attempt at goal until late in the second half when United found the net on a lose ball in the box and the score was now 2-1. Wildkatz tightened up their defense and prevented any more scoring from United and the match ended with a Wildkatz win. Coach Dayak said: “It was an Impressive game from our 05 girls, we created a lot of chances and showed great team strength”. West Coast won 4 games in a row against ECNL opposition on home opening day, next up for Wildkatz, is the continuation of NPL play as they meet MVLA ECNL on Sunday, September 15th, at Legacy Fields in Tracy, Ca.

The U17 West Coast Kaos are off to a solid start to their 2019/2020 season with a tie and a win in the Norcal Premier Champions league. The girls tied the top seeded Davis Red ECNL team 3-3 and their shutout Marin FC ECNL 2-0. Over the weekend, Kaos played Marin FC ECNL at home in Livermore. Kaos scored their first goal at the 15 minute mark with a cross from Alivia Ganz to Anaya Shelton who timed her run just right to sink out of reach of the Marin Keeper. The second goal of the match came at the 35 minute mark from a Katie Zeck corner kick to the center of the Marin box where Zuzette Zamora headed the ball into the top right corner. Kaos closed the first half up 2-0. Kaos dominated the second half but were unable to add any additional goals. The match ended with a Kaos 2-0 win. West Coast Keeper, Maddie Mannina, is credited with the shutout. Earlier in August, Kaos traveled to Davis to play the top ranked Davis ECNL Red team. This match was Kaos’ first in the Norcal Premier Champions league. Kaos scored first with a shot from Alina Garcia. Davis answered with a goal of their own. The second goal for Kaos came from a corner kick to Ganz. Daisy Samuelson is credited with the assist. Again Davis answered. The third goal for Kaos came from Midfielder, Haylee Heffner, who fired a shot from outside the 18. Kaos was now up 3-2 but Davis was not done. They answered Kaos’ 3 goals with 3 of their own. The match ended in a 3-3 tie. West Coast Soccer Club has six teams playing in the Champions League. This is a major accomplishment for all the players, coaches and the club. Follow all the girls and boys teams of West Coast on the web at www.westcoastsoccerclub.com, Facebook, Twitter, and Instagram.